The world’s first artificial beef burger was unveiled yesterday with the help of chef Richard McGeown who flipped the £250,000 patty for press and media in a London location

Yesterday saw the unveiling of the world’s first ‘cultured beef’ burger in London, with the help of chef Richard McGeown of Couch’s Great House Restaurant in Cornwall, who aided to the cooking of the burger at the launch event, along with taste testers Austrian food researcher Hanni Rutzler, US food author Josh Schonwald and ITV News anchor Nina Hossain.

So why all the fuss? I hear you cry. Post’s project is deemed to be the answer to major world issues such as global warming and world food shortages.

At the event, attended by the press and media, the taste testers gave their verdict:

Schonwald said that the burger had a ‘middling flavour’ and a ‘cake-like quality’, while Rutzler said ‘the surface of the meat was crunchy but not typically crunchy’.

To no surprise of ours, of course it was the chef’s opinion that the crowd eargerly awaited, with calls of ‘let the chef taste it’, throughout the launch. His comments were: ‘It had a nice, meaty texture. No off-putting irony, metallic flavour with a very rich beef taste. The exclusion of fat was a big factor, it was incredibly dense.’

Chef McGeown also likened the taste of the faux beef burger to meatloaf, which makes me wonder – could the artificial meat be a huge hit, similar to ‘I would do anything for love’ wonder Marvin Lee Aday? We’d certainly do anything to find out – except taste it, maybe. 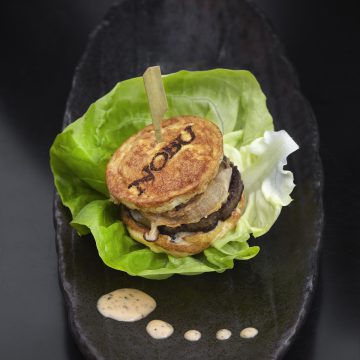 Jump on the burger trend and make it at home! The legendary Nobuyuki Matsuhisa gives you a tofu burger to remember.

Tucked above Portobello’s busy west-London streets, one of the city’s finest gins is distilled in The Ginstitute and served in one of Sophie Cater’s favourite bars: the Portobello Star. She chatted with Brand Director, Tom Coates…

Who doesn’t love a burger, but what do you think about this burger by Molecule-R?