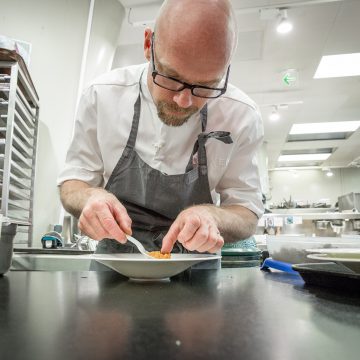 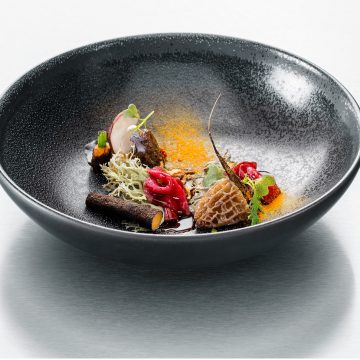 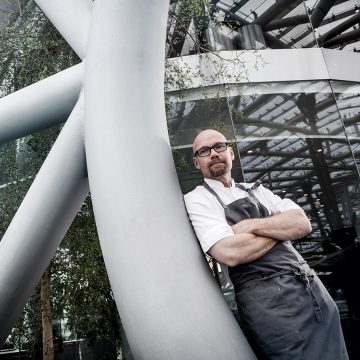 Magnus Ek will be the guest chef at Hangar-7’s Ikarus Restaurant this June. Find out about his culinary prowess and what’s in store

With his chef’s whites, horn-rimmed glasses and three-day stubble, the top Swedish chef Magnus Ek doesn’tbear much resemblance to a castaway. But he again landed on an island when trying to find a new spot for hisfamous restaurant Oaxen Skärgårdskrog, which was situated on a small isle: Oaxen Krog, which opened in2013, is now located on an archipelago island of Djurgården in the centre of the city.

Discerning gourmets just love to go ashore there to taste Magnus’s innovative and regionally rooted New NordicCuisine, which is among the best in the world. “I don’t have a mentor. But I am inspired by people who are passionateabout what they do…” Ek’s transformation into one of the world’s best chefs was as calm and down-to-earthas the man himself. His CV boasts neither renowned top chefs in Paris or London, nor unusual cooking adventureson foreign soil. Instead, Ek developed his very own range at an early stage and came up with a kitchenphilosophy firmly based on regionality and sustainability long before starred chefs like René Redzepi.Ek moved to Oaxen with his partner Agneta Green in 1994, after spells in several other restaurants. It is moreby coincidence that the couple landed on this small island, which lies around an hour from Stockholm and canonly be reached by ferry: “We were aiming for southern Sweden but ended up in Oaxen.” The couple eventuallyopened their Oaxen Skärgårdskrog restaurant there.The fertile, remote island supported Ek’s cooking philosophy of only using sustainable and, above all, regionalproduce. He found delicacies such as wild herbs, seaweed and berries right on his doorstep. One of his mainpriorities: “It makes me very happy when I find my ingredients in nature. For me, cooking is primarily aboutfinding the best ingredients.”

Word quickly spread about Ek’s cooking talent, making the small island a real hotspot on the gastronomic scene.Discerning gourmets were only too keen for Ek to spoil them here with his modern and innovative cuisine. Withperfect craftsmanship, he created dishes such as his Arctic char with herring broth, puffed grain, egg yolk andartichoke, his spider crab cooked in kelp with shellfish jus, fennel purée, rhubarb, asparagus and semi-driedcarrots with burned pepper, and his chopped calf’s heart and beef fillet with beef marrow, green juniper, grilledcucumber, and char-grilled onions and wild flowers. These and other unusual creations saw Ek’s restaurantgrace the World’s 50 best restaurants list five times between 1994 and 2011. The restaurant was also awardedthe title of Sweden’s best restaurant by the White Guide magazine. In 2011, after almost 17 years, Ek and Greenclosed down the Oaxen Skärgårdskrog and went in search of a new location in Stockholm. The reasons: Due tothe weather, they had to close the restaurant on Oaxen for several months each year. Furthermore, their cookingon the island was hidden from the Michelin Guide, which only rates Stockholm-based restaurants in Sweden.Shortly after closing the restaurant, Ek opened his own butcher’s shop, where he cures and smokes meat himself.In May 2013, Ek wrote another chapter in his culinary success story when he finally opened his new restaurant,Oaxen Krog, on an archipelago island near the city – much to the delight of many gourmets.

When it comes to the location for a restaurant, Magnus Ek is like a castaway: sooner or later, he will run ashoreon an island, as was the case with his Oaxen Krog restaurant in Stockholm, the successor of the world-famousisland restaurant Oaxen Skärgårdskrog. On the small archipelago island near the city, he currently celebrateshis modern and regional cuisine, which is among the best in the world and therefore has been awarded withone Michelin star.

Ben Greeno, the chef in charge of implementing the first award-winning Momofuku restaurant concept outside of New York, namely in Sydney, Australia, speaks to FOUR after his stint in Salzburg to takeover the kitchens as guest chef at Restaurant Ikarus in Hangar-7.

FOURNews | The proof is in the pudding

English born chef Luke Dale-Roberts, of the highly acclaimed South African restaurant, The Test Kitchen, will be manning the helm of Restaurant Ikarus in its latest chef takeover.