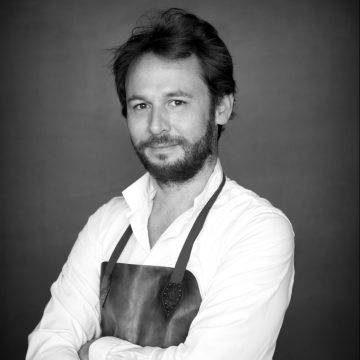 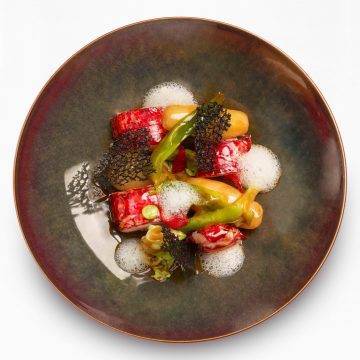 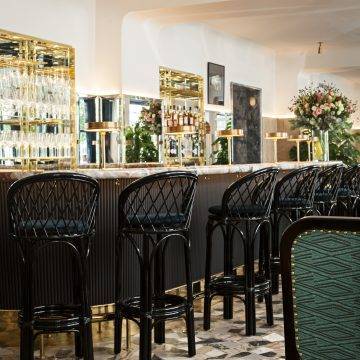 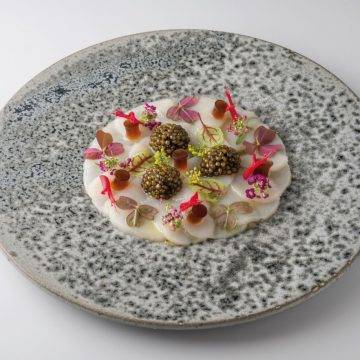 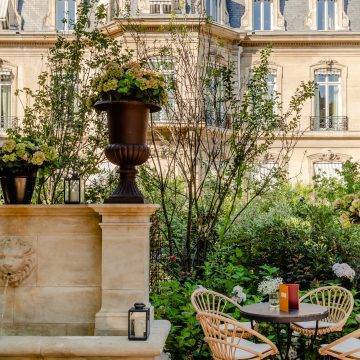 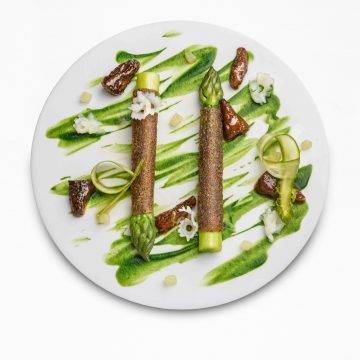 With cooking in his blood and rhythm in his soul, French chef Mathieu Pacaud has his finger firmly on the pulse of contemporary fine dining.

“I basically grew up in the kitchen of L’Ambroisie restaurant where my father worked. I was bathed from the first years of my life in this world of high gastronomy imbued with luxury, perfection and sensuality”, explains Mathieu.

As the son of Danièle Pacaud and the 3-Michelin-Starred Chef Bernard Pacaud, Mathieu had cooking in his blood. He also happened to grow up in an area of France that is renown for haute cuisine and an abundance of fine produce.

Although Mathieu dabbled with the idea of following another career path, the heavy influence of his father’s cooking legacy at L’Ambroisie, in Paris, and his mother’s Corsican roots eventually led Mathieu to understand that his gastronomic journey would be one that combined classic cooking techniques with contemporary creativity.

“At first I wanted to be a pianist, I took lessons and played assiduously – I still play when I have the chance by the way – and then from music to kitchen, the artistic extension was imposed on me.”

“Working in the kitchen, I soon realized that the creative process was infinite in the culinary art. I have to say I was in good hands working at L’Ambroisie with my father.”

Having started his career at 15, Mathieu Pacaud trained under culinary greats such as Benoît Guichard at the 2* Le Jamin, Eric Briffard at the luxurious Plaza Athénée, as well as numerous stages at gourmet French restaurants in Lebanon, before returning to France to work in the kitchens of L’Ambroisie.

From 2003 to 2009, Mathieu worked his way up the ladder at L’Ambroisie to become head chef at the age of 28. He was given pride of place next to his father where they began to co-create the menus for the award-winning restaurant.

“After many years of training, my personal style of cooking was born. Influenced by the rigor of my early learning and my father’s infinite sensitivity, I worked right away with the best products that continue to inspire me. My daily motivation is to seek excellence and sublimate prime ingredients to get the best from them.”

It was 6 years later that Mathieu Pacaud began to feel the need to spread his wings again so he started looking for new challenges. By 2015, he had taken the plunge and saw the opening of his first solo venture, near Trocadéro in Paris. Hexagone, a cocktail bar and Histoires, a contemporary restaurant within the bar, breathed a new lease of life into the well-known area of the city. Mathieu’s hard worked paid off because within a year of opening the Michelin Guide awarded one star to Hexagone and two stars to Histoires.

The quick success of his pilot project spurred Mathieu on and allowed him to think even bigger. He soon began to work on a further two projects to add to his collection: reviving Divellec, one of the most famous seafood restaurants in Paris and the creation of a Macau outpost of L’Ambroisie. Moving at an incredible speed, both projects were inaugurated by 2016 and Divellec even received its first Michelin Star within 6 months of the opening.

“For me, the place is what really sets me off. It’s the starting point, I feel an emotion and then I imagine a decor, an atmosphere that will be the setting for my culinary creations, every detail count… as Beaudelaire said “scents, colors and sounds respond”.

Having been firmly hit with the restaurant bug, Mathieu didn’t stop with there. In addition to his Parisian adventures, the chef went back to his Corsican roots and opened restaurant Murtoli in Domaine de Murtoli, as well as the acquiring the infamous Apicius restaurant, near the Champs Elysées, in 2018.

“Each of my restaurants is really unique. You do not approach a farm on the sea at Murtoli in Corsica the same way as a hôtel particulier with a garden in the heart of Paris like Apicius or an institution on the esplanade des Invalides like Divellec.”

“Every place imposes its own style: I wanted a fusion with nature, a somewhat wild farmhouse atmosphere for the Murtoli estate in the heart of Corsica, for Divellec, a classic fish temple I preferred the art deco style revisited by the very creative studio KO, Apicius which is a castle in the middle of Paris called for extreme elegance, so I appealed to François-Joseph Graf.”

“It would be of no interest to just reproduce a restaurant, the creative process is new every time, that’s what I like – I am constantly boiling. The story is different each time, but the common point is on the plate: the excellence of the product and the search for perfection.”

Having used the last decade to hone in his skills as a restaurateur and talented chef, Mathieu’s cooking style of tradition-meets-creativity has evidently matured into a subtle synthesis of elegance and sobriety.

Mathieu’s main desire within all his restaurants is now primarily focused on enhancing local products in a relaxed, yet sophisticated environment.

“It is very difficult to find the best products, but I have the chance in Paris to have a network of privileged contacts and I adapt to the fishing of the day and to the proposals of my suppliers who know me well. The situation is completely different in Murtoli where I have the immense chance to have all the products at hand on the estate: the vegetables or animals, everything is cultivated, raised on site, it is wonderful.”

“I use different regional products to create unique menus in the individual restaurants. For example, I have developed a vegetarian menu at Apicius, as I want to interpret all the seasonal vegetables and the freshness of the plants that we have in spring. One of my favorite dishes from this menu is Royal Dublin bay prawns aniseed refreshed with golden caviar“.

“I also have several signature dishes depending on the season and the restaurants: at the Murtoli estate, the poultry cooked with lavender or the sole in saffron aioli, as for Divellec, the layer of seabass, green apple candies and pink berries, or at Apicius the lobster with caviar. But you know, I’m restless, there’s always something new.”

The accomplished chef stylishly revisits the classics of French cuisine, but with a contemporary twist that suits his timeless yet ever-evolving attitude towards food.

“Tomorrow’s cuisine is yesterday’s, we don’t invent anything, we start from French culinary traditions, but we pay much more attention to the seasons. We are as close as possible to the product, which implies a healthier and more respectful vision of the planet.”

“I think this is where the success of a restaurant lies: in the style, the consistency and in constant renewal – a new eye on an institution. The service is also highly important: efficient but not rigid, the atmosphere must be warm.”

“I think I was just lucky to be able to choose exceptional places in which to root these ideas.”

With no signs of stopping, Mathieu has his sights set on the further expansion of his empire with projects including the menu creation at restaurant Anne in the Pavillon de la Reine hotel, on Place des Vosges in Paris, and the future release of Volume 2 of his cookbook featuring 350 vegetable-orientated recipes.

“I am constantly trying to be more creative in my work and my restaurants: from Apicius to Divellec, from Murtoli to restaurant Anne, but also my book, my days are full, and that’s what I love.”