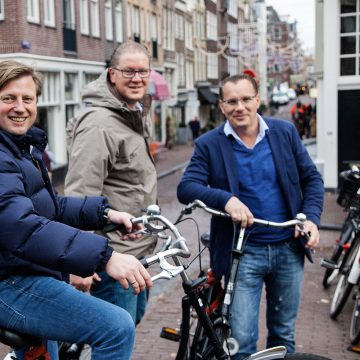 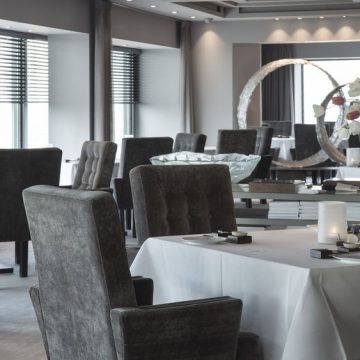 Ciel Bleu at Hotel Okura in Amsterdam is celebrating the momentous achievement of receiving two Michelin stars for the 10th consecutive year with a culinary event: The Table at Ciel Bleu. The event will take place on 7 October 2018, with chefs Onno Kokmeijer and Arjan Speelman teaming up with their friend and three Michelin-starred chef Kevin Fehling from The Table Restaurant in Hamburg to provide an exclusive afternoon of fine dining for their guests.

Executive Chef and Manager of Ciel Bleu Restaurant, Onno Kokmeijer, explains the idea behind the collaboration: “In July of this year, we celebrated our two-star anniversary in a very special way, with a reunion of former Ciel Bleu chefs. In October, we want to put on something really spectacular again to make sure this milestone does not go unnoticed. That’s why we’ve invited Kevin to help us put on a very exclusive lunch.”

The friendship between the German and Dutch chefs dates back almost 10 years to when Ciel Bleus was awarded two Michelin stars for the first time. Kevin Fehling speaks fondly of this friendship between the chefs: “We regularly visit each other’s restaurants and every time I’ve eaten at Ciel Bleu it’s been an extraordinary experience, and each time I’m amazed at Onno and Arjan’s continued development as chefs. Ciel Bleu is one of my favourite restaurants in the world and I’m really looking forward to creating a menu with Onno and Arjan.”

Kevin Fehling, a German chef who received three Michelin stars for his work La Belle Epoque, was at that point the youngest three Michelin-starred chef in Germany – a remarkable achievement and honor. Fehling then left La Belle Epoque to open his own restaurant in 2015, The Table in Hamburg. That same year Michelin awarded him three stars for his new restaurant, an unprecedented achievement for his remarkable performance as a chef. The Table has a striking interior that takes inspiration from its name: a single dark cherry wood table weaves through the entire restaurant, allowing guests to have a sneak peek at the happenings in the restaurant’s open kitchen.  The Table is renowned for inventive dishes that have a complex flavour profile.

Ciel Bleu Restaurant is located on the 23rd floor of the Hotel Okura in Amsterdam, and is led by the chef duo Onno Kokmeijer and Arjan Speelman. Under this duo’s leadership, Ciel Bleu was awarded two Michelin stars status in 2007, and has maintained its two Michelin star status since. The restaurant which is affiliated with the Alliance Gastronomique, boasts no less than three SVH Masters: Master Host Pasquinel Kolk, Master Sommelier Noël Vanwittenbergh and Master Chef Onno Kokmeijer. The ‘Chef’s Table’ which is located adjacent to the kitchen is available for exclusive bookings for up to 10 guests. The ‘Starlight’ Room offers private dining options for groups of 10 to 24 people.

Details of the event

The Table at Ciel Bleu, in which the two restaurants each offer three courses in a six-course menu, is a one-off event that will be held at Hotel Okura Amsterdam on Sunday 7 October 2018. The all-inclusive lunch is €350 per person, including parking. You can make a reservation via restaurants@okura.nl or +31 (0)20 6787 450.