Universally loved, the French breakfast is a treat for those with a sweet tooth. Croissants, pain au chocolats, chausson aux pommes and a plethora of pastries line the glass panes of bakeries every morning, wafting out their sweet scents and enticing everyone within nose’s reach. Enjoyed with coffee in a bowl, a tartine of freshly bakes bread and jam and the day always gets off to a positive start…

An indulgence that is matched by no other breakfast plate, the English breakfast demands a very hungry customer. With fried or scrambled eggs, bacon, sausages, black pudding, baked tomatoes, baked beans, mushrooms and toast, all slurped down with a tea, this breakfast is a labourer’s dream.

North African morning dreams are made of a traditional breakfast. A mix of savoury shakshouka – poached eggs and spicy tomato sauce – and flat breads, white cheese and quince jelly, and sweet crème de sorgho – a warm, chalky porridge made from sorghum grain, sugar and orange blossom essence, topped with sweet sesame paste. Kept hydrated with a strong coffee, this breakfast is for the refined indulgers.

Paying homage to the gluttons, the American breakfast holds nothing back. Alongside an eggs-bacon-toast-hash brown medley, thick pancakes, covered in maple syrup and bacon make a regular appearance, as well as French toast – or eggy bread. Enjoyed with a glass of orange juice, at least this traditional breakfast includes some fruit.

The traditional Iranian breakfast incudes a variety of flat breads, feta and white cheese, jam (quince, sour cherry) or marmalade and whipped cream, accompanied by a sweet Persian tea. However, breakfasts vary from region to region, with some enjoying more meat-laden soups or porridge.

Ethiopian gastronomy has injera – a large sourdough fatbread – at its heart, with breakfast not being an exception. At breakfast it is shredded, and served with a mixture ofberbere(spices), butter and onions, which is eaten either plain or with yoghurt and honey. Alternatively, kinche – a type of porridge – made from cracked wheat, is very popular. Eaten as a sweet start to the day with honey, or savoury with spiced butter and fried onions it is one of the more delicious, healthy and sustaining options.

Simple, healthy and fresh is what the traditional Greek breakfast abides by. A Mediterranean medley , it usually includes yoghurt, fruit, nuts and honey. Peppered with eggs and pastries, the breakfast drink of choice tends to be a strong coffee, occasionally spiked with a shot of ouzo to form ‘Greek coffee’.

Although breakfast in China is dictated by the country’s many provinces, there are some staples that rarely go amiss in the traditional meal. Rice forms the basis ofcongee – a type of porridge that is complemented by fish, meat or flavourings – and traditional steamed buns. Fried or soup-based noodles and deep fried bread sticks also feature heavily in Chinese breakfasts, which, alongside some tea or sweetened soy bean milk, make for a delicious start to the day.

Breakfast in Fiji is an absolute treat. With flour forming the basis for many of its dishes, a type of donut, pancakes, bread or biscuits are hard to miss. However, considering its geography, the traditional breakfast also has a propensity to feature fish in, such as the nuqa fish served in fermented coconut yoghurt. All topped off with lemon leaf tea and fresh tropical fruits, you can’t go far wrong with this breakfast. 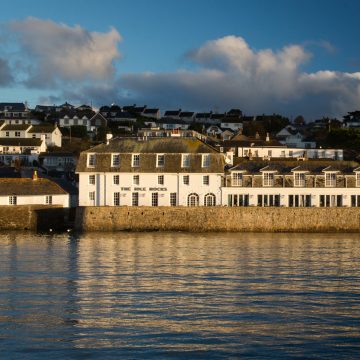 When grey city life is getting the better of you this winter, think of this: being woken by gentle, lapping waves; fresh seaside air; seafood galore; and relaxation in welcoming, effortless luxury. You can have all this and more in Cornwall, the westernmost part of England. Its Mediterranean feel in summer is well-loved but what the Cornish winter has to offer might surprise you.

#FOURNews | At home with Julia Child

Shinobu Namae | The Francophile in Tokyo