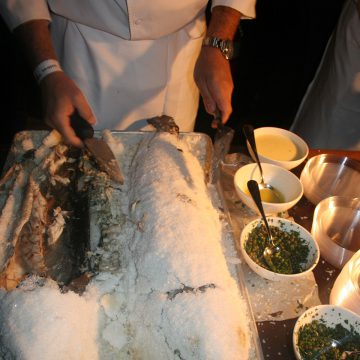 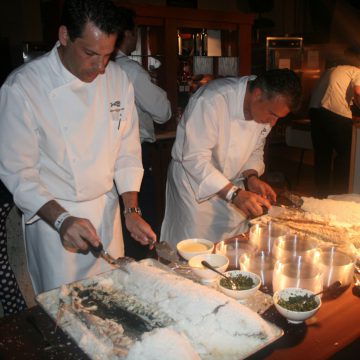 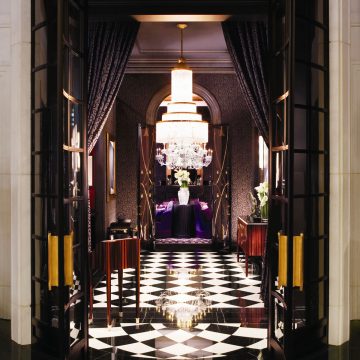 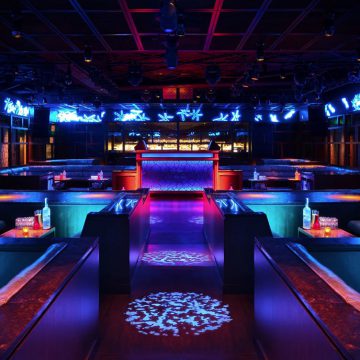 Food, booze and some of the world’s most celebrated chefs, what’s not to like about Vegas?

To my right stood Gordon Ramsay, dishing out miniature versions of his dishes from Gordon Ramsay Pub & Grill. In front of me Joёl Robuchon was wildly gesticulating with his good friend and fellow chef Guy Savoy, while across the palm tree-flanked illuminated pool, Michael Mina was tending to a pig roast. What could possibly bring such food and frolics together? The answer is Vegas, and the setting was the Grand Tasting at the Garden of the Gods, CaesarsPalace, at last year’s Vegas Uncork’d festival – undoubtedly the US’s premier food festival, which is about kick off again for another year.

With severe trepidation, I first landed in the world’s foremost party destination just two days prior to last year’s Grand Tasting event. I’d always thought of Vegas as lacking in culture, heart and soul, but I was keen to find out if I could be sold on Sin City.

Despite my initial anxieties, I wasn’t eased into my first Vegas experience. Led at full speed, hurtling down the famous Strip, I decided to let go and go along with the ride. In doing so, I was won over within the first few hours of landing on Nevadan soil. All of the clichés about Vegas turned out to be true and the fact is you can’t help but have an enormous amount of fun.

Back to the city’s culinary scene, and just a few years ago, Vegas was better known for its all you can eat offerings and fast food, rather than tasting menus and Michelin stars. However, Las Vegas is now home to a glamorous array of restaurants by some of the world’s leading chefs.While the Grand Tasting takes place during the height of the Uncork’d festivities – where all of the chefs come together with a crowd of around 2,000 – the festival showcases a series of master dinners, tastings, lunches and mixology events over four days (May 8 – 11), centered around Caesars Palace, Bellagio, MGM Grand and The Venetian.

While the world’s best chefs all have restaurants in Vegas, they’re rarely in town. The beauty of Vegas Uncork’d is that the festival brings these top chefs together and offers a way for food lovers to meet the chefs, while experiencing the best of Vegas.This year’s line up for Vegas Uncork’d is set to be as impressive as last year’s, including appearances by Daniel Boulud, Joёl Robuchon, Guy Savoy, Mario Batali, Pierre Gagnaire, Masayoshi Takayama, Michael Mina, Nobu Matsuhisa and Thomas Keller. With the festival, much like the city itself, continuing to attract the biggest culinary names in the US.

It’s impossible to give a list of the ‘top’ restaurants in Vegas – there are too many – so here are some of my highlights from last year.My first stop on the culinary tour of Vegas was Andrea’s at Encore, part of the Wynn hotel. Although not specifically participating in the festival, the Wynn’s restaurants are a must-visit.

From the glamorous long bar to the soundtrack by DJ Steve Angello (of Swedish House Mafia), there was an initial fear that the setting would eclipse the food, however, chef Joseph Elevado doesn’t compromise on the quality of his menu. With an extensive sushi selection, Australian and Japanese wagyu beef, and standout dishes such as the steamed sea bass and the peanut braised wagyu beef short rib.

With jet leg about to hit, I spent the night at the new Nobu hotel, within Caesars Palace. Caesars Palace is also home to casinos, shows, 14 restaurants, two nightclubs, a world-class spa and the Gardens of the Gods Pool Oasis. Nobu hotel has a more discreet and private feel to the rest of the complex, with its own private reception and lobby area, which takes guests directly up to their waiting suites. Vegas’ newest Nobu restaurant is located directing next to the hotel. Occupying 12,775 sqft, it is the world’s largest Nobu restaurant with 327 seats.

Each of the Strip’s major hotels is in constant competition with its neighbour. The MGM Grand upped the stakes last year with the launch of Hakkasan – one of the brand’s 12 international restaurants and home to their only nightclub. At the time of opening, at last year’s Vegas Uncork’d, the club also became the largest in the world. Hakkasan is one of the highlights of Vegas’ dining and nightlife scene. Not only is the food reliably good, with chef Ho Chee Boon ensuring his style of Chinese cuisine is perfected across all Hakkasan restaurants, the setting is unrivalled and the cocktails – try ‘The Hakka’ – are to die for.

Hakkasan’s style runs throughout the restaurant-cum-club, with the first level dining area divided by latticed woodwork and shades of the brand’s signature blue enveloping the space. Ling Ling Lounge carries the theme to the third floor, where a more intimate bar allows an ideal space for cocktails, while the fourth and fifth floors open up to the club. Oversized VIP booths allow the rich and famous to sip on premier vodka, champagne and other drinks (Joёl Robuchon and his entourage were spotted in one of the booths during the 2013 festival), allowing a birdseye view of the main and room.

While a visit to Hakkasan and its nightclub was one of the most memorable experiences of Vegas, so was Joёl Robuchon’s restaurant, also located at the MGM Grand. Robuchon holds four Michelin stars in Vegas alone (26 stars worldwide), with L’Atelier de Joёl Robuchon home to one star and Joёl Robuchon Restaurant home to three stars. For a more theatrical experience, I ate at L’Atelier de Joёl Robuchon. Bringing his signature ‘L’Atelier’ look to Vegas, with red and black throughout, the kitchen is central to the restaurant, with a centre bar and small tables lining the restaurant.Head chef Steve Benjamin serves small and large French dishes, with a contemporary edge. The crispy langoustine fritters, langoustine cooked in its shell and sea urchin were the standout dishes on the menu.

Then there’s the wine, withVegas’salaciousoffering not left behind among the city’s throng of restaurants.Vegas happens to holdmore master sommeliers than any other city in the US, withWynn Las Vegas, for example, home to more than 100,000 wines, including $50,000 1990 bottle of Cristal Champagne.

On my last morning, I made my way to Serendipity 3, just outside of Caesars Palace, and had breakfast on the terrace. Serendipity 3 is an ideal daytime people watching spot and the place to enjoy fresh fruit smoothies or, if you’re brave enough, the famous frozen hot chocolate.While basking in the desert sun (and demolishing a Serendipity 3 Hangover Omelet), I contemplated my time in Vegas. Yes, there are casinos and slot machines galore and hungry tourists revealing far too much flesh, while slurping on slush cocktails on the Strip, but if you want a whole lot of fun, the world’s best chefs and restaurants (and one hell of a hangover!), head to Vegas.