The world’s first ‘cultured-beef’ burger – created by Professor Mark Post and costing a whopping £220,000 – is being launched and tested today in a secret location in London. Read more…

Behold – the world’s most expensive beef burger in history is being unveiled in a secret location in London today [5 August 2013] costing a whopping £220,000.

And it doesn’t stop there – the 5oz patty has another world’s-first to its name, as the first lab-grown “cultured beef” burger to have, er, never walked the planet.

The creator – Professor Mark Post – is said to be attended by a celebrity chef at a secret location in the west of London today for a ceremonial pan-flip, as well as two volunteers who will be among the first in the world to try the meat which has been grown from cow stem cells.

The only other person known to have tasted the faux meat is a Russian reporter who took it upon himself to pop a piece of cultured pork in his mouth on a visit to Professor Post’s lab.

Wholly unsatisfied by his experience of Professor Post’s first produce, the Russian reporter is said to have described the pork as ‘chewy and tasteless’.

Not much more appealing is the name that Professor Post refers to his artificial meat – “in-vitro meat”.

While the taste of Post’s creation is currently being disputed, there’s no denying its innovative food-revolution appeal.The meat could save the planet from global hunger and the effects of greenhouse gases – caused by the release of gases from grazing livestock.

It’s good news for the non-meat eaters the world over, too, as one of the meats greatest advantages is that it has the potential to dramatically decrease the need to slaughter animals, therefore making it an ethically suitable choice for vegetarians.

Speaking in the wake of its launch, creator Professor Post said: “What we are going to attempt is important because I hope it will show cultured beef has the answers to major problems that the world faces”.

“Our burger is made from muscle cells taken from a cow. We haven’t altered them in any way. For it to succeed it has to look, feel and hopefully taste like the real thing.” 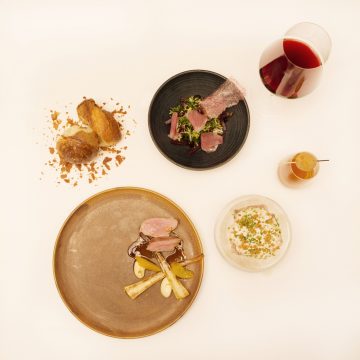 Spring and Easter signify many things, one of which being Lamb, this recipe from Michelin star chef Daniel Patterson shows us how to make the most of this succulent meat. Yum!

Where does the perfect steak come from?

What more could you possibly want from your steak other than sensational marbling, wonderful tenderness, perfect texture and delicious flavour? We give you the ins and outs of Australian Black Angus Beef.

Watch how a butcher cooks his bacon…