The Picasso of The Kitchen | Atsushi Tanaka

Japanese/French chef and owner of Restaurant A.T – introducing a dynamic, artistic and progressive cuisine with multiple influences to the palates of Paris.

Chefs are always put into categories for the types of food they cook, the places they come from or the countries they work in. Let’s face it, we are all put into boxes when it comes to certain things, but those boxes don’t always fit with who we are.

Enter Chef Atsushi Tanaka. He might be Japanese, living in Paris, but you can’t describe his cuisine as Japanese. It’s not even Spanish or Scandinavian – even if he is inspired by and has worked throughout Europe for much of his career, he is distinct.

When asked to put his cuisine into a category he simply states “impossible”.

Having worked at some of the best restaurants in Europe including in Paris, of Alicante, Pastorale, Antwerpen and , Sluis as well as Geranium in Copenhagen and and Oaxen Krog both in Stockholm.

With a diverse culinary background he is able to construct a unique gastronomic identity. His restaurant A.T. is situated in the Latin Quarter of Paris opened in March of 2014 and continues to exceed expectations. Forbes listed it as one of their coolest places to eat in 2015.

Inspiration comes from various sources, it could be a colour or a texture, and his creations are a mixture of poetry, art, colour and taste. His one time boss, Pierre Gagnaire refers to Atsushi as the “Picasso of the Kitchen” and if you take a look at his creations, it’s easy to see why. 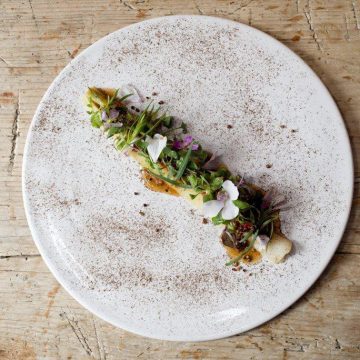 Fancy something a little lighter for your Monday supper, then look no further than Benoit Dewitte’s recipe for smoked leek with goat cheese…Yum!

As we begin the new year, this means only one thing for the Dining Impossible series; new dinner parties and new continents, kicking off 2016 with Lima, FOUR finds out more…

With an exciting 12-course tasting menu planned for their collaborative dinner on 11th October, FOUR catches up with Benoit Dewitte and Atsushi Tanaka to find out what guests can expect from the dinner and how they have developed their unique styles over the years…