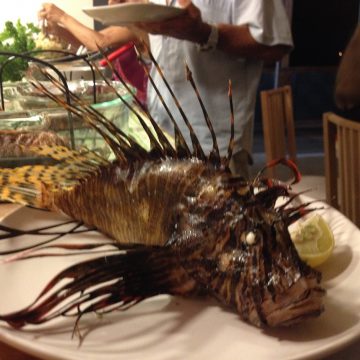 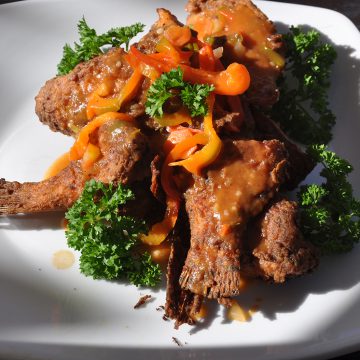 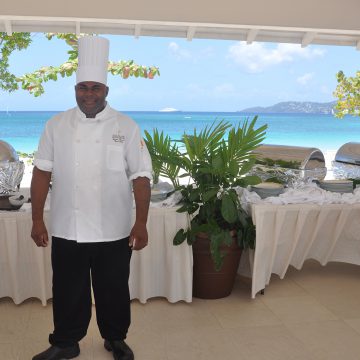 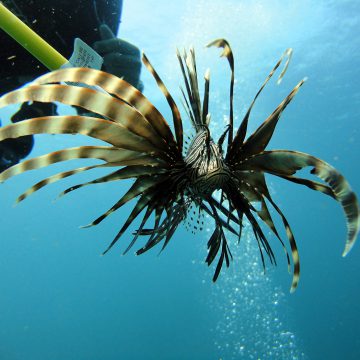 The lionfish – a relatively new feature in the waters of Grenada that is devastating the ecology and reef life – has become somewhat of a local delicacy. Stephen Thorpe explores the epicurean solutions used to control the imposing fish in this beautiful land…

“Eat Em to Beat Em” is the strident cry across the Caribbean, and nowhere louder than in that Windward land of epicurean distraction—the Isle of Spice, Grenada. The strikingly ornate lionfish is native to the Philippines and was released via the aquarium trade in Florida some 20 years back, morphing into a super abundant invasive force which can now never be eradicated, only controlled. It’s been an astonishing progression in a short time through coastal North and Central America, the Gulf of Mexico and northern South America.

The Lionfish in Grenada

Lacking any natural predator, with a phenomenal reproductive cycle of up to 3000 eggs every four days, it lays waste to local reef ecology and small fish, consuming up to half its bodyweight per day. Grenada has only felt the pinch in the last two years, and the talk has turned to eating their way out of a tight spot, of changing the mindset towards the lion and sustaining critical resources for the years ahead.

A few enlightened individuals are spreading the word— Peter Seupel, the Director of Aquanauts Dive Centre at True Blue Resort says “ I prefer it battered, it’s high in healthy omega-3 fats, we’re protecting the marine environment and it tastes damn good… what’s not to like! We educate our divers to take them and are working on training and marketing programmes with fishermen”. The Dodgy Dock restaurant here has an easygoing nautical vibe where Liverpudlian Head Chef Gary Birkett confirms people’s perceptions are changing: “tuna, barracuda and kingfish are a staple, but I’ve offered them dusted in flour, fried and served with a slaw of sesame oil and ginger”. Innovation is the keynote at True Blue and there’s now an in-house brewery using hops from England too— beer battered lionfish soon mainstream on the Dodgy menu, is surely a no brainer?

When ad hoc culls are undertaken, certain places will occasionally feature lionfish but supply is a problem due to fishermen’s fears and misconception. Awareness is pivotal—overcoming notions that the fish is “poisonous” for example—when only a few dorsal spines are in fact painfully venomous and can be easily removed with the right scissors and glovework. Indeed, many see it as “too pretty to eat” while other chefs and hoteliers simply don’t realise it tastes fantastic and cooks well in a variety of ways. A couple of connoisseurs even reckon it surpasses Chilean sea bass and the fabled local red snapper, which is some accolade. In the Arab world it’s a delicacy. Snapper and grouper eat lionfish in the Indo-Pacific but are routinely overhunted in the Caribbean, and a shift in outlook is long overdue.

Spice Island Beach Resort on Grande Anse has set the standard for luxury and taste in the eastern Caribbean for nigh on 25 years and has a loyal following of well heeled Brits. The Head Chef Jesson Church, a deeply cherished institution of ten years standing, and creator of the singular lionfish mousse, an ethereal blend of fish, nutmeg, cinnamon, egg whites and cream, presented as a starter, is also fond of a light battering job too, ideally with caper. Director Nerissa Hopkin is adamant that hoteliers have to get on board and instruct their fishermen in safely harvesting it: “ it fits perfectly well with our environmental programme and menus, and will enhance our cuisine immeasurably”, she affirms.

At nearby Mount Cinnamon, Savvy’s Executive Chef Andrew Sloley specialises in local/international fusion and rates it highly: “it’s very versatile, lovely when fried, done as sushi or ceviche with garlic and onions, a julienne of veg including christophene (good for lowering high blood pressure), and a dash of my own coconut milk”. Uli Kuhn owns the celebrated Aquarium restaurant and upmarket watering hole at Port Louis Marina, the Victory Bar, where he’s experimenting with regular and cajun smoked versions and Thai sushi to wide acclaim. “We’ll integrate it into both main menus when consistent supply is maintained,” he enthuses, “and we’re already working hard on various processes.” Laluna, tucked away on Portici beach in the south west, is a hip Bali inspired bolthole with a classy Italian influenced restaurant strong on pasta, seafood and meat with a pair of acting Head Chefs, Aaron Charles and Albert Paul, both keen to embrace the benefits of lionfish. That said, the grilled swordfish here is unsurpassable.

Grenada is verdant and mountainous with rich volcanic soils and a veritable cornucopia of fruit, vegetables and spices, none more savoured than the nutmeg that accounts for a fifth of the world’s production. The by-product, mace, the red filigree surrounding the nut is merely the best preservative known to man. It was formerly far greater, but the devastation of Hurricane Ivan in 2004 affected the 30 year growing cycles. Organic produce is generally a given here, and there are 43 restaurants in St. Georges, the capital alone; it’s probably fair to say Grenada is fast becoming a destination of choice for foodies bent on the esoteric. For a relatively small island it certainly has a wide range of fine dining, and gained kudos from Gary Rhodes’ endorsement at Calabash where Dexter Burris is another lionfish aficionado: “Poach, steam, grill it, or pan fry with salt, pepper and lime juice…oh, and it curries brilliantly”. Lion tapas are served at Saturday brunch in the hotel’s Bash beach bar.

The best seafood eatery is BB’s Crabbacks on the northern edge of St. Georges harbour where mine host Brian Benjamin sources fresh catch daily from Grenville and serves incredible crab and lobster sauces with fillet of barracuda. He’s also fully versed on all things lion, naturally. “It eats like a snapper, possibly more succulent, and if someone can supply it I’d clean it myself, it’s that good”. Not all locals, however are fully au fait with its merits. Kalinago hotel is bang on a sublime stretch of sand at Morne Rouge and boasts a Head Chef, Melvin Morris, solidly grounded in his country’s home cooking.”I took my basic training from Mum”, he tells you proudly, “ but I’ll admit I’d no idea it was a good eating fish. We definitely need to overcome prejudice against it with educational projects”. The Flamboyant too, which has arguably the finest aspect of any hotel in Grenada, cresting a bluff at the southern end of Grande Anse beach, could benefit from commissioning fish quotas from their adjacent Dive Grenada operation. In the far northern outpost of Petite Anse, Philip and Annie Clift have cultivated a splendid cottage ambience in wild oceanside terrain, with a reputation for good food and company an important part of the vibe. Adventurous and committed, expect the lion to feature soon.

Even further afield, an hour’s boat ride away, the sleepy sister island of Carriacou is steeped in seafaring and boatbuilding, a backwater of civility and some fine cooking. Roxanne Russell at Bogles Round House is the best in town, expert in high quality comfort food, West Indian seafood and a deathly Grenadian chocolate fondant. Moringa, on the main drag in Hillsborough, was the first place to buy them and serves lionfish panfried with sesame seed, finished with a reduction sauce.

So, yes, the word is out in some far flung places…… and a few are listening. What’s vital now is four way dialogue and action between fishermen and divers, hoteliers, restaurants and chefs and the Government’s Fisheries Division. A start has been made, and traction gained through the unstinting efforts of Canadian Marine Biologist Christine Finney, while the German Government is about to ratify a large funding programme for the designated Marine Preservation Areas, to include advice, specialist training and protective gear for fishermen to target lionfish in a more coherent fashion. It’s an opportune time……..so, if you find yourself down Grenada way, forget the snapper, just order the lion. 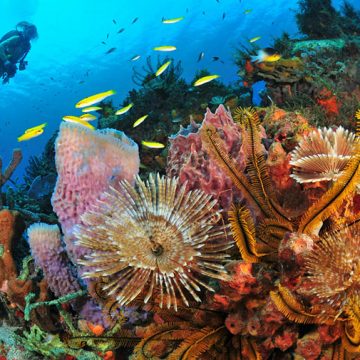 Wondering where to head to this Summer break? Fiesta Americana Grand Coral Beach Cancun is the perfect option, with private yachts and fine-dining from the get-go…

Hot off the back of the recent Cricket World Cup, Royal Westmoreland in Barbados is offering cricket fans the opportunity to holiday in the home of a cricketing legend.