If you’ve never tried Saint Géron, a pure, naturally carbonated water bottled at the spring of Saint Géron, then the superiority of the humble table water may not have crossed your mind. Until now. FOUR Magazine’s Simone Miché explores the importance…

Although water may not be the most obvious choice of tipple when choosing a bottle to complement a fine-dining dinner table, itcertainlyis a certainty.

Next to the fine porcelain and exquisite glass, the mound of glinting steel and napkins that are as crisp and white as the sheets of a penthouse suite in a 5 star hotel,the only homogenous bottle – aside from the mandatory grape-filled variety – is bound to be a glassy vessel of still or sparking H2O.

With this in mind, the selection of a bottle of water, along with expert wine-pairings to accompany a tasting menu or an a la carte, has become an ever more important affair.

Stumbling across Saint Géron in a recent event of culinary hedonism, I discovered how true this statement had become.

In this first encounter, with what could be the purest forms of water I have ever tasted, I realised that the biblical story of Jesus performing his very first miraculous act of transformation I’d been told as a child, was,in fact, incorrect; when Jesus had ‘turned water’, surely it was into Saint Géron – not wine.

Described by French Michelin starred chef, Alain Dutournier, as ‘a bottle worthy of its purity’, Saint Géron is a mineral water that is naturally carbonated and, above all, perfectly pure, which is sourced at the ancient spring of Saint Géron in France. It is said that Julius Caesar mentioned it in the Gallic War and those who try it can only describe it as one thing: the ‘queen of table waters’.

Of course, I wouldn’t expect you to accept this purely based on the words of Alain Dutournier, Julius Caesar or, indeed, mine alone; I am but a lowly food journalist with a penchant for the finer things in life.

So consider this; the famous Argentinean designer Alberto Bali took it upon himself to create Saint Géron’s sleek, slim-line bottle, and some of the greatest chefs in the world of gastronomy, including: Alain Dutournier of Le Carré des Feuillants in Paris, Alain Ducasse, Le Jules Verne Tour Eiffel, Paris along with his restaurant concepts in Las Vegas, New York, Washington and Moscow; Guy Savoy, Rue Troyon, Paris; Pierre Gagnaire, restaurant Pierre Gagnaire, Paris, Moscow; and Helen Darroze, The Connaught, London, have all chosen to adorn their Michelin-starred menus with its name.

In 2010, Saint Géron was the water of choice at the World Expo in Shanghai, representing the French Pavillion along with Jacques and Laurent Pourcel – the twins behind three Michelin starred restaurant Le Jardins des Sens in Montpellier.

It is also associated with some of the finest wine producers in France –Mitjaville Family in Bordelais and their main wine Tertre Roteboeuf,Philippe Chesnelong of Domaine de Creisses, Patrick Piuze of Chablis, Maxime Cheurlin and his wine Georges Noellat from winery Vosne Romanée –to name but a few.

“But it’s just water!” I hear you cry. Of course, I chose Saint Géron to highlight the importance of water for the fine-dining affair, not because I am trying to persuade you to part with that vintage rouge or sparkling white in favour of a bottle ofeauon your next gastronomic outing. Merely, I am asking you to take a second look at the selection of water on the menu, and consider the inevitably important and influential part it plays.

Below is a ‘table picture’ taken from Alain Dutournier’s Le Carré des Feuillants in Paris, a restaurant which has awarded chef Dutournier 2 Michelin stars and a place amongRelais & Châteaux’s ‘Grand Chef Relais & Châteaux’. If pictures speak louder than words, and I have not yet managed to convince you of the humble table water’s superiority or, indeed, Saint Géron’s, then I urge you to scroll down, for an introduction of the next big thing since, well, bottled water…

The watery world of Alexander James

International artist Alexander James is currently opening up his studio to a variety of creative people to nurture an environment of creativity and art. 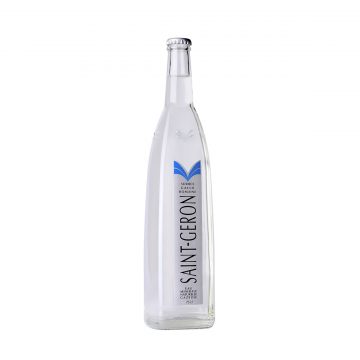 “A Water To Be Lived”

Water and health go hand in hand, but what is the healthiest water you could opt for? Saint-Géron Water is. FOUR explores why…