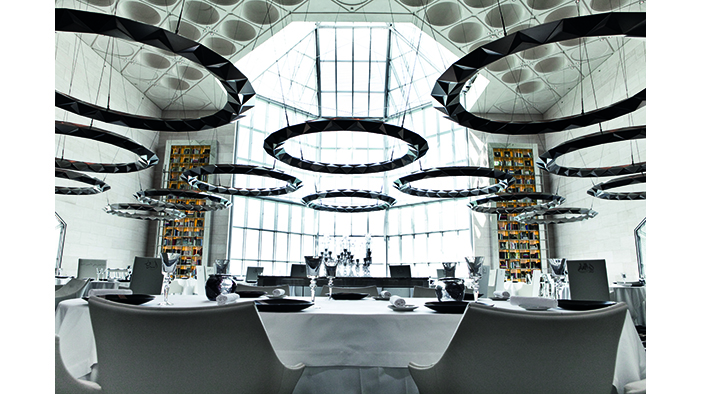 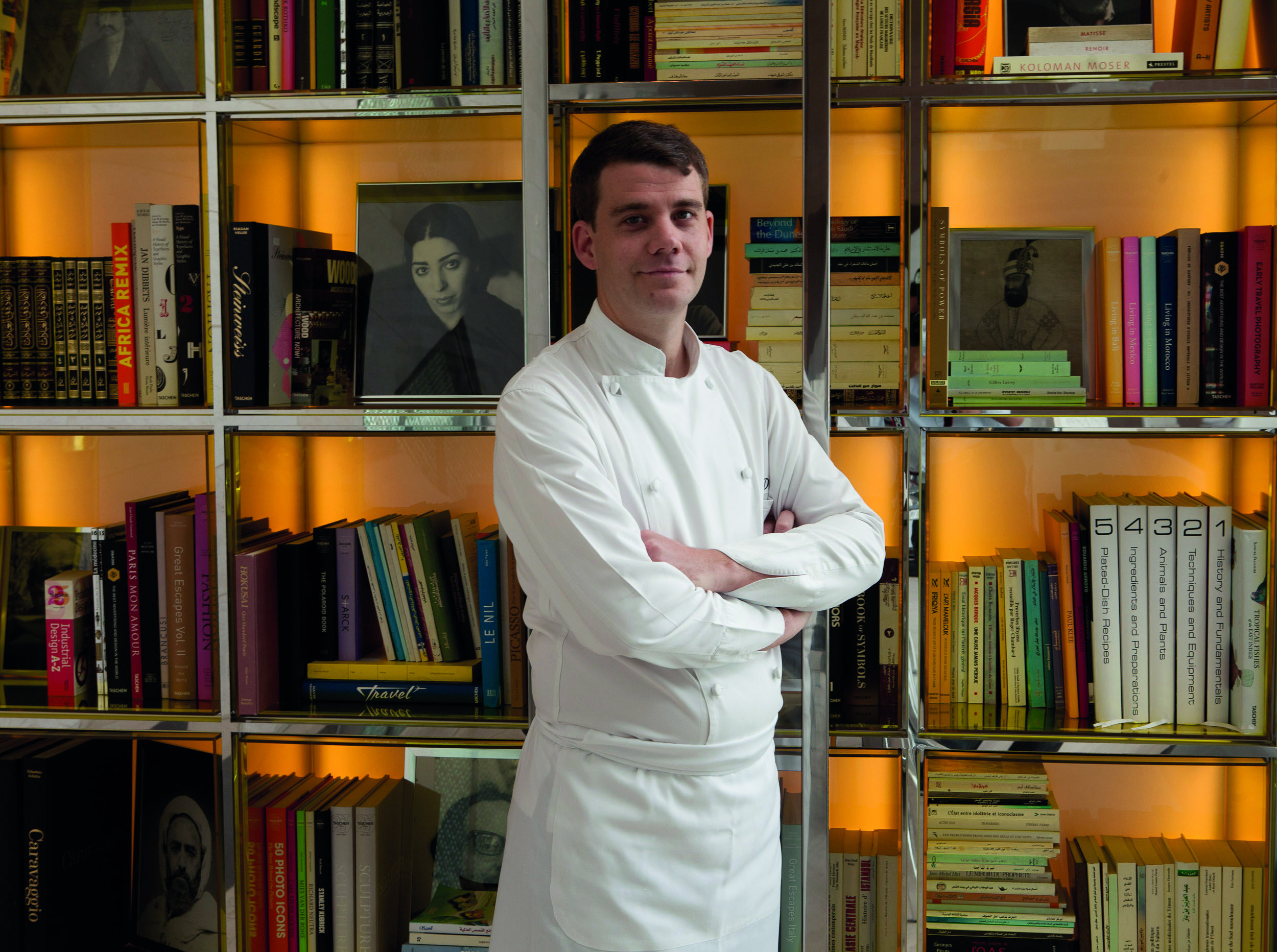 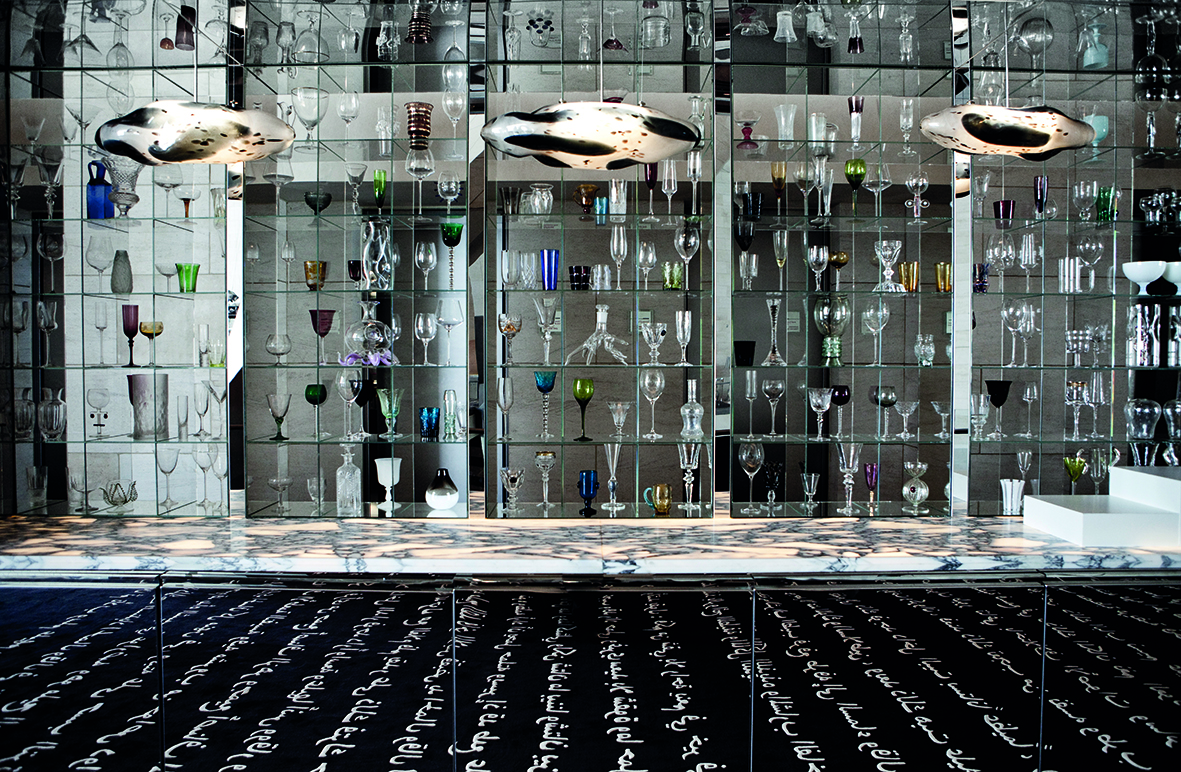 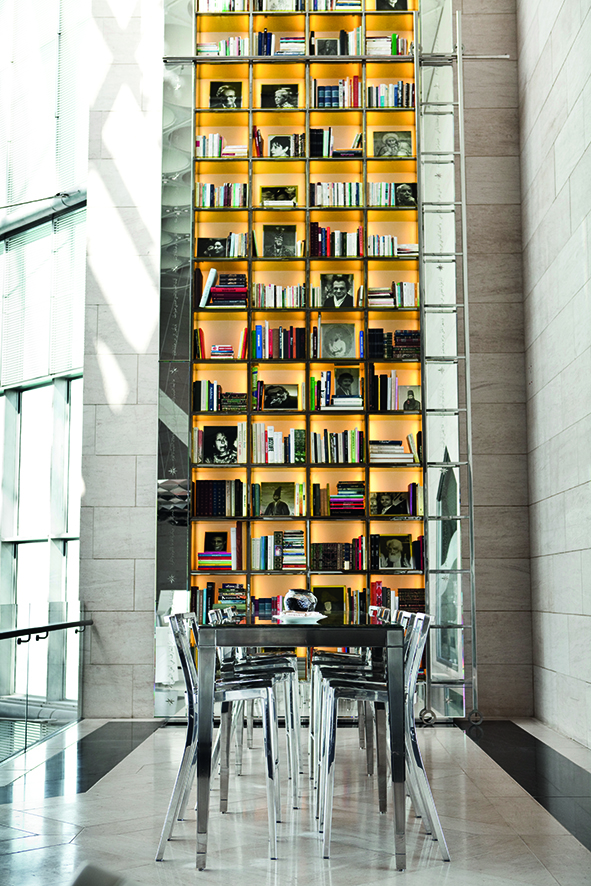 The Grand Dame of Doha

When Alain Ducasse landed in Doha — at the city’s Museum of Islamic Art — with the opening of IDAM in January 2013, the city’s dining scene was instantly transformed. FOUR speaks to the chef at the helm, Damien Leroux.

Approaching Doha’s iconic Museum of Islamic Art on the city’s waterfront, guests are greeted with a stark, brutalist structure, created by I.M. Pei, that is in deep contrast with the blue hues that lie beyond.

The still Arabic Sea sits immediately behind the museum, with traditional dhow boats bobbing in the water, offering a glimpse of the country’s economic past (dhows were using to transport goods and fish, including fishing for the region’s famous pearls.).

Inside, the museum features a kaleidoscopic design where artistry runs through the veins of the building, right up to the top floor. It is here that many of the region’s cash-rich travel to experience gastronomy at its finest — IDAM restaurant by Alain Ducasse.

The restaurant’s design is as impressive as the rest of the building, created by none other than Philippe Starck. Large windows allow light to flood into the space, with views out to sea and the city’s skyline.

Arabic calligraphy features in the carpet, recalling folk tales of One Thousand and One Nights, while a contemporary design, including a feature floor-to-ceiling bookcase, occupies the 60-seat space. The restaurant serves “contemporary French-Mediterranean cuisine designed with an Arabic twist,” and has become known serving dishes such as the tender camel, foie gras and black truffle with souffléed potatoes.

With over 25 years of expertise to his name, Ducasse decided to open his first restaurant in the Middle East in 2013. “My centre of gravity remains, and will always be, cooking. I am thus a happy cook,” says Ducasse.

“My inspiration comes from a combination of the southwest of France, where I grew up, and from the Mediterranean, which seduced me from a young age. But I also remain a curious cook. My roots carry me but do not hold me down.” This statement is encapsulated in IDAM’s menu, which basks in traditional, classic techniques and ingredients, which are then gently complemented by Arabic riches.

It is another French chef with whom Ducasse entrusts his Arabic kitchen; the formidable Damien Leroux, taking over from Frederic Larquemin in October 2016. Leroux has worked for Ducasse’s Monaco team at Louis XV, where he worked under Franck Cerutti.

Of course, the big question on everyone’s lips is what is it really like to work with the great Alain Ducasse? Leroux offers a philosophic answer. “For me, working for chef Alain Ducasse is sharing the same culinary philosophy, which is…a quest for the origin of flavour that gives each produce its best role.”

It was his Monaco mentor, however, who has been the biggest influence on Leroux. “Chef Franck Cerutti, the executive chef of Hotel de Paris in Monaco, taught me the greatest respect for the produce and how to reveal the flavours and fragrances of Mediterranean cuisine.”

Leroux also reveals his admiration for US chef Dan Barber, of of Blue Hill at Stone Barnes in New York. “He brings the principles of good farming produce directly to the table. He follows in the steps of what chef Ducasse started. We pay a lot of respect to seasonality when creating IDAM’s menus.”

While respect for the produce and revealing the true flavours of ingredients lie at the heart of Leroux’s philosophy, he admits that guests travel to Doha specifically to visit IDAM for the overall experience. “With an amazing location at the heart of MIA [the Museum of Islamic Art] and a breathtaking view of the city, guests come to IDAM for an experience. They discover and taste a combination of Mediterranean cuisine twisted with Middle Eastern flavours,”

The culinary team has researched far and wide to create dishes that thoughtfully and accurately reflect Arabic culture.

“The menu’s inspiration comes from extensive travels to the flavourful culinary cultures of Morocco, Egypt, Lebanon, Middle Eastern, and India. The menu pays tribute to the local culinary culture. In other words, what is served is French Mediterranean haute cuisine with a mix of tastes and spices from the Middle East. What makes it special is the fact that the menu takes its inspiration from the produce.”

I wonder if operating a fine-dining restaurant in such a hot and dry climate has its drawbacks in terms of sourcing seasonal produce? “Adding an Arabic twist to classical Mediterranean dishes requires understanding the local culture and its ingredients. It is a fascinating challenge to approach new fish and spices for examples.”

Leroux continues: “As an example, I am using dry roses in a duck consommé broth and some turmeric that I found interesting to add on our next seasonal menu with a pigeon. Dry fruits and nuts are also common condiments in the region and IDAM’s guests can discover our dates duck breast or our scallops peanuts and broccoli.”

The Middle East benefits from the best of both worlds — spices and other eastern ingredients, excellent local seafood and shellfish and Europe’s finest ingredients, too. “Doha has several vegetable markets and each one is a hub between Asia and Europe. I discovered several varieties of eggplants from here and there which I like to cook for our lunch menu. [It] could be cooked as eggplant caviar, chips or roasted in perfect addition to a local bonito fish,” he reveals.

“Talking about fish, thanks to our location in the Arabic peninsula, I discovered new sorts of fish and seafood, caught a few kilometre from the museum. It is the first time I’ve cooked species from the hot seas. I’m trying a hammour (grouper fish) that I will serve with a black truffle. In the same spirit of local twist, I like the local red snapper, [which is] very similar to the sea bream we find in the Mediterranean Sea. I’ll serve it as a carpaccio with citrus and local herbs like coriander,” he says.

It is, however, the humble yet essential olive and lemons that Leroux sites as his most treasured ingredients. “These condiments are a must in a cuisine with Mediterranean influences. Since I started as the chef at IDAM I have become a fan of cardamom and fresh coriander.”

Locally, the food movement — particularly at the fine-dining end of the scale — is moving forward, greatly helped with the opening of IDAM and then Nobu at the Four Seasons in 2015.

“The gastronomical scene [in Qatar] is rich of different cultures and it is very inspiring. I’ve met several chefs from different backgrounds and origins and they transmit their passion for their way of cooking and how they define local influences.”

Although many top-flight chefs have been drawn to the Middle East — Jason Atherton and Jean-Georges Vongerichten in Dubai, Wolfgang Puck and Yann Bernard Lejard in Bahrain, as well as brands such as Hakkasan and Zuma — the Michelin Guide is yet to release a regional tome here. Something Leroux admits “would be very interesting, indeed.”

At just four months into his new role Leroux is still getting to grips with the restaurant and its surroundings, but says he enjoys visiting the local souks and sharing his finds with the team, while his culinary ambitions are to “continuously challenge myself and learn about other cultures. To continue cooking using seasonal produce with less salt, less fat and less sugar.” The very essence of Mediterranean cuisine. And, he finishes: “Maybe one day I will open my own restaurant.”