It’s the Year of the Horse! Chinese New Year is upon us, but where are the best spots to indulge in the country’s food? We’ve put together a Chinese epicure’s dream…

Located in The Langham, Hong Kong two Michelin star T’ang Court celebrates the Year of the Horse with a special menu and festive puddings by Executive Chef Kwong Wai Keung…

Homemade New Year pudding, turnip pudding and taro pudding are headlining the sweets menu. All made with the finest ingredients and masters’ touch, they make a wonderful gift.

Recently double Michelin star acclaimed restaurant, Tin Lung Heen at The Ritz-Carlton, Hong Kong is a wonderful option for Chinese New Year. Executive Chef, Paul Lau Ping Lui is regarded as one of the top Cantonese chefs in Hong Kong, with experience that spans over 36 years in Beijing, Shanghai, Hong Kong and Guangzhou, Dubai and London.

With a selection of the chef’s signature Dim Sum, including pork and scallop dumpling with tomato and golden shrimp dumpling, you’re sure to be seeing the New Year in with good fortune.

The celebratory dinner is based around the chef’s signature barbeque selection, including pork, chicken, goose, alongside steamed crab claws and chicken soup.

In the heart of Soho’s belly is Chilli Fagara, an illustriously great Szechuan restaurant. Priding itself on the freshest seafood, vegetables and meat, chef Robert Wong is behind the restaurant’s Michelin star. With sizzling dishes coming out of the kitchen at great speed, choose from a three-tiered spice level for each dish. Specialities include baby squid, Chilli Fagara style crab and Mandarin fish. Reserve as quickly as possible as tables fill up quickly! 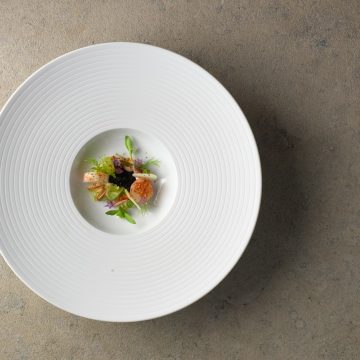