22 December. A date which usually has no real significance, apart from for a few, a day which is marked by the customary excitement brought on by the nearing of Christmas.

This year however, for the fine-dining lover, it will be one of sorrow; it is the day that Sergio Herman has announced he will be closing his restaurant, Oud Sluis.

Restaurant Oud Sluis has been open for 25 years, has three Michelin stars and for the past eight years has been listed in San Pellegrino’s World 50 Best Restaurants. In the Dutch guide,Lekker, it took the number 1 spot in the Top 100 nine times and it has received all 20 of the 20 points available in Gauld Millau. For chef Herman, who has always said he would close Oud Sluis on a high note, that time has certainly come.

In a recent interview, when asked if it was a tough decision to close Oud Sluis, chef Herman stated:

‘Yes it was difficult… For 25 years I gave all I had to bring Oud Sluis to a top level… And I did it: everything I ever wanted to achieve with Oud Sluis has been achieved. So now it’s time to end this chapter of my life.’

For chef Herman, however, it seems the closure of Oud Sluis is in no way the end. ‘I have no shortage of plans for the future and it’s impossible to pursue them without letting go of Oud Sluis… But I can’t wait to start from scratch.’

In the coming years, Sergio will be focusing his time on his other restaurant concepts, Pure C and La Chapelle, as well as his culinary publishing house, Minestrone, which he co-owns with food photographer Tony le Duc.

As the saying goes (we sincerely hope!), goodbyes are never forever…

Dutch chef Sergio Herman gives you a recipe named ‘Cattled in the Field’, a combination of wagyu beef, garlic foam, charred onion and an aubergine tapenade…look closer for more details… 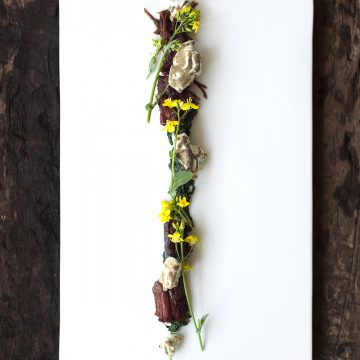 Native Cuisine of a New Order

Founder of Xerjoff perfumes, Sergio Momo tells us about what his perfect weekend would be…