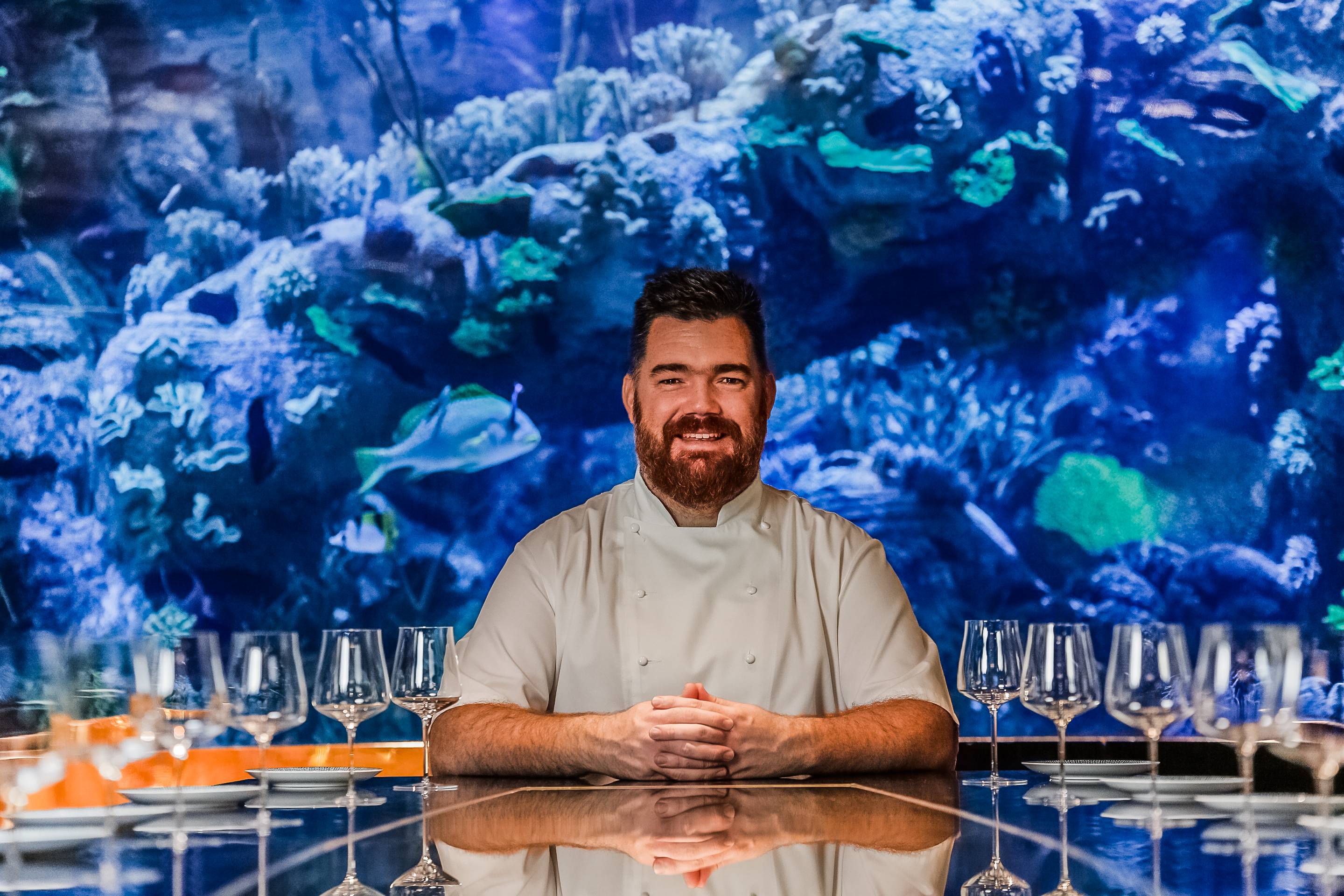 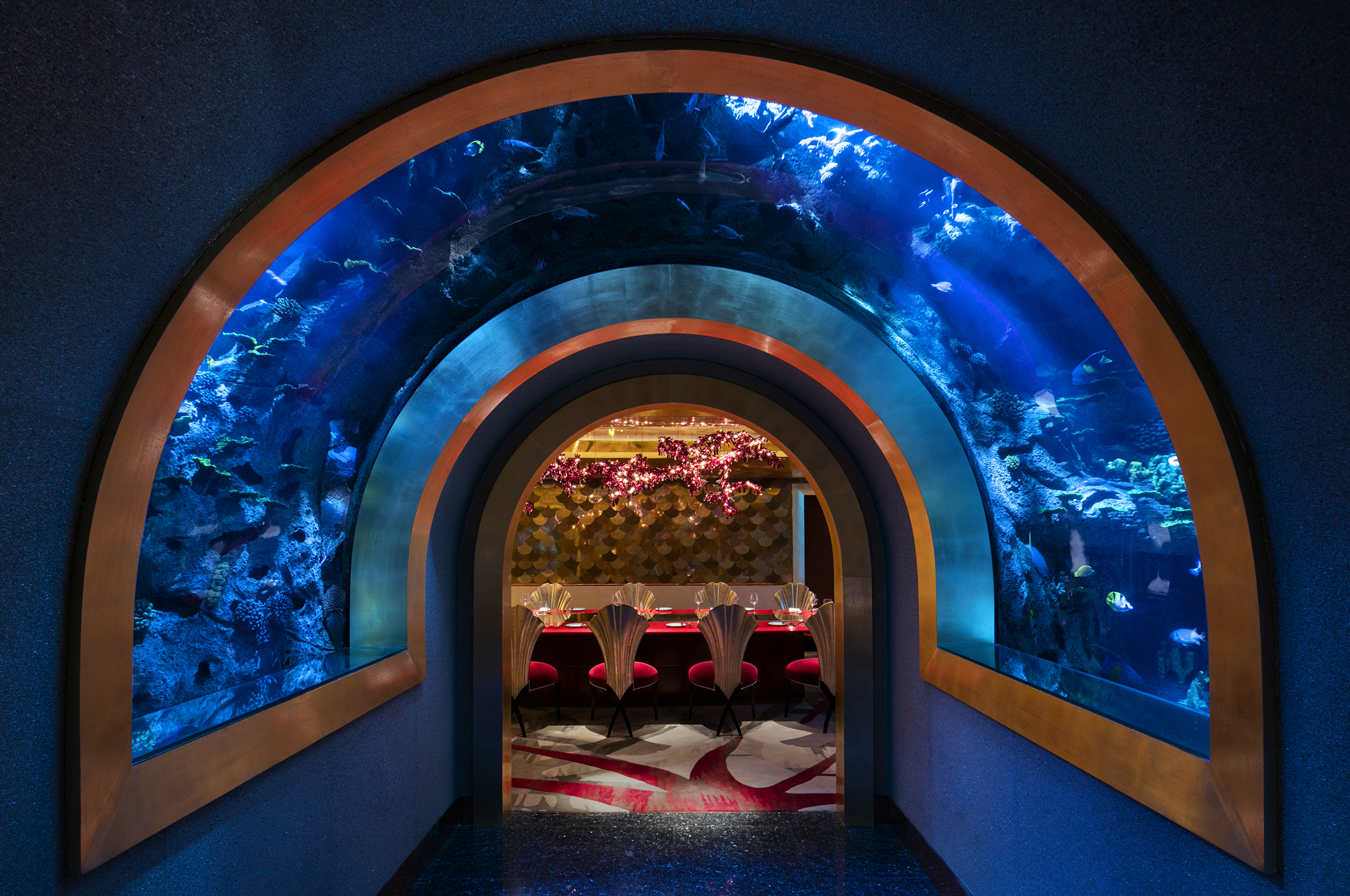 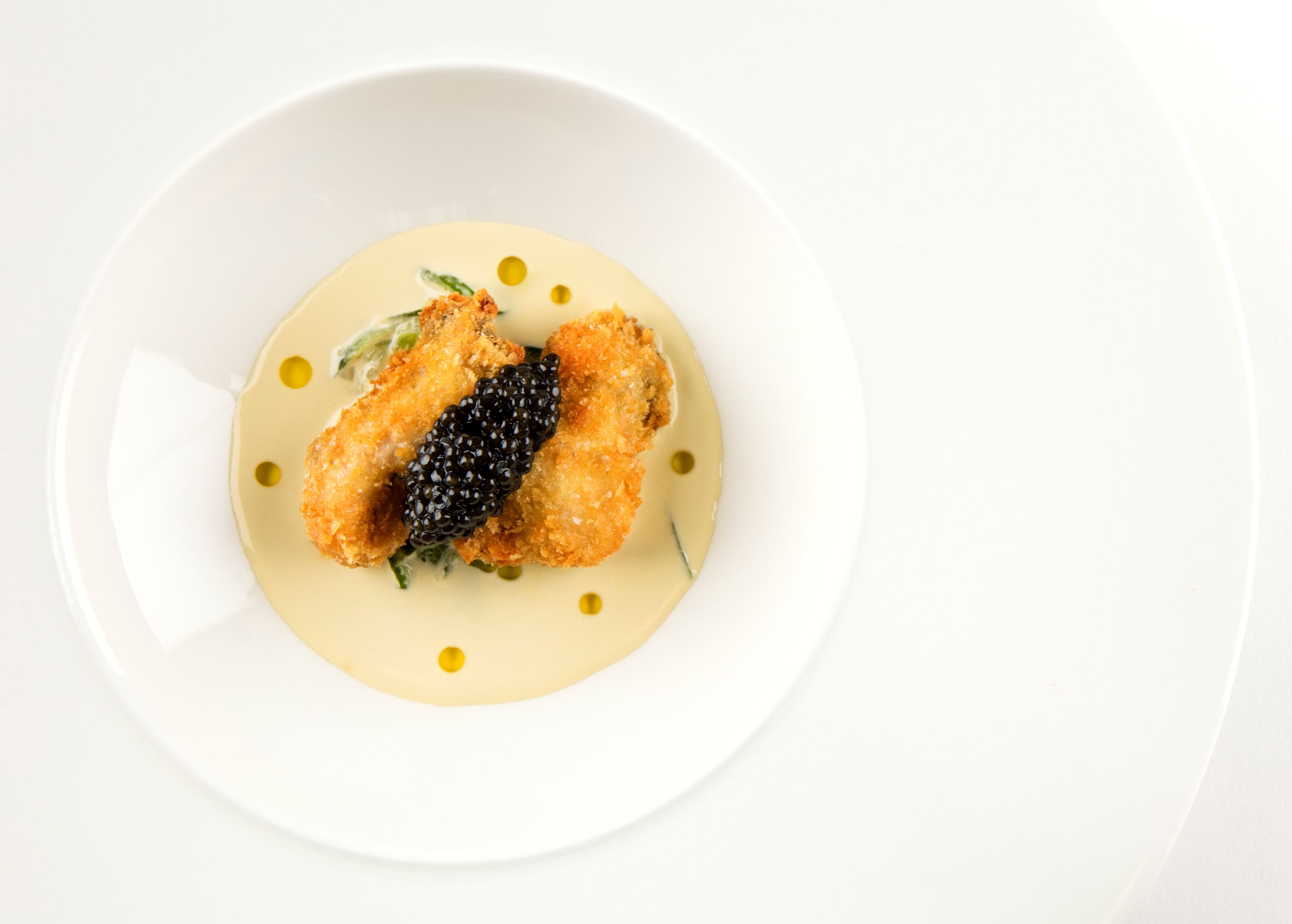 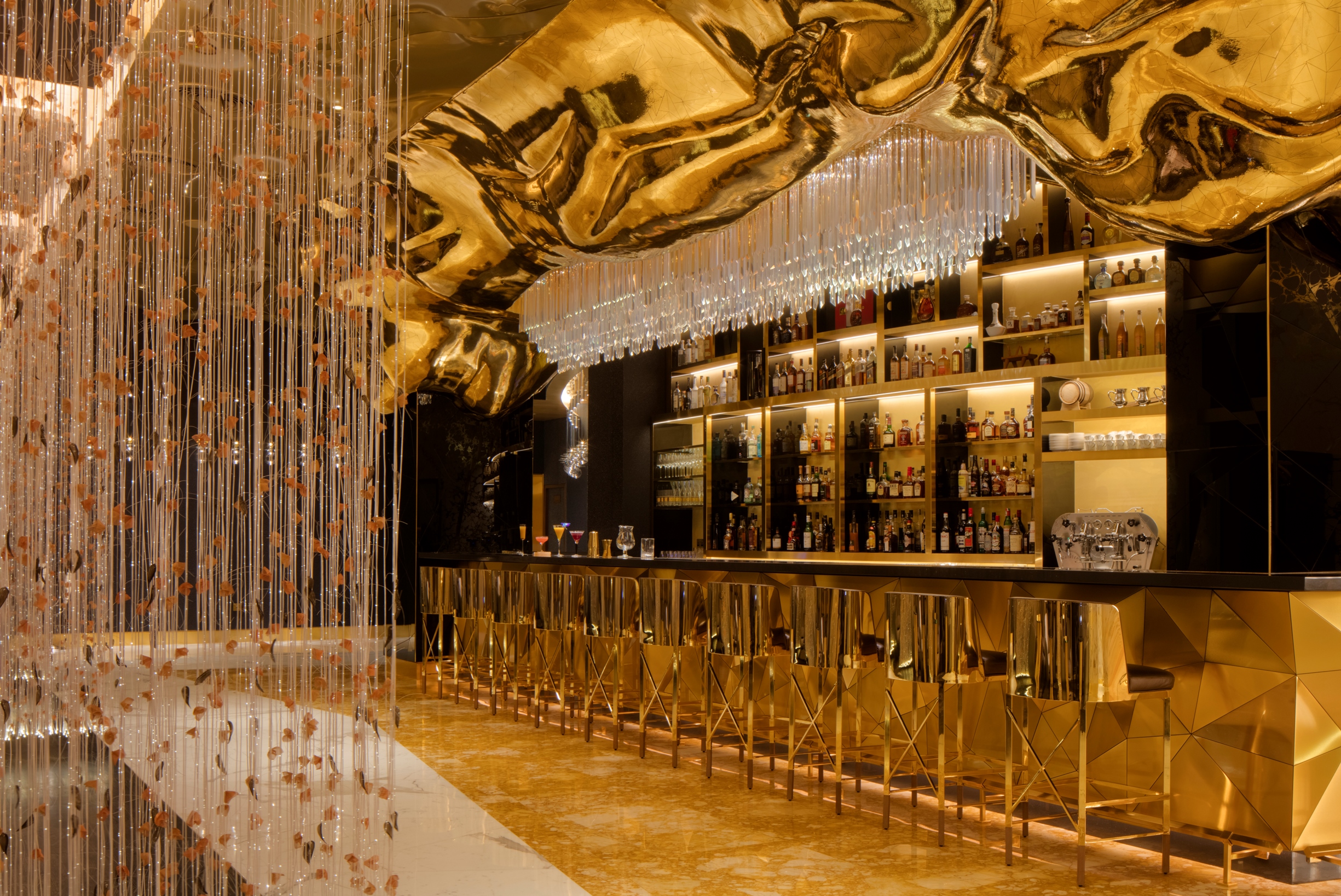 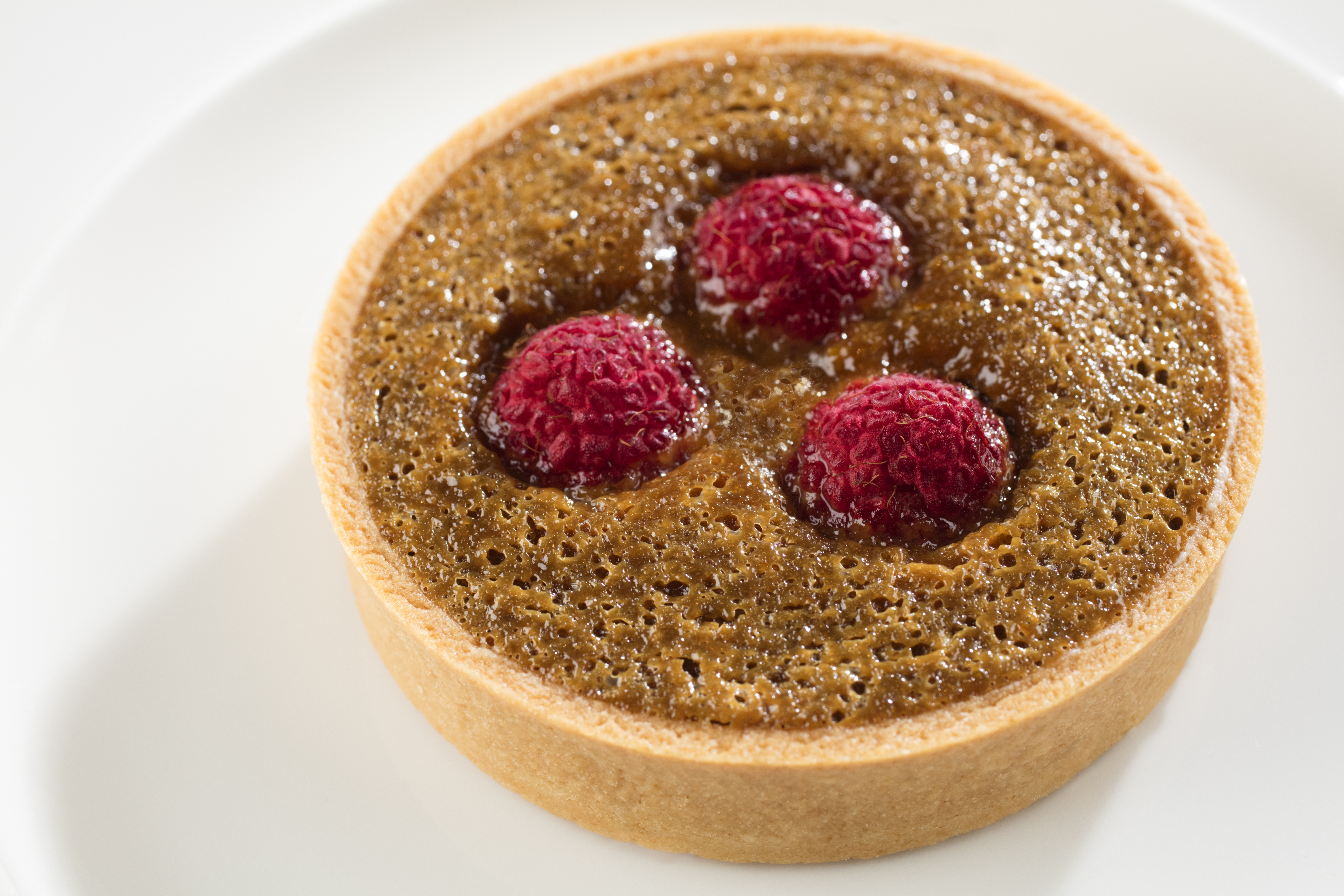 Rockstar of the Middle East

Maxime Jacovella visits Al Mahara at the Burj Al Arab Jumeirah to see how two-starred chef, Nathan Outlaw is bringing a piece of Cornwall to Dubai.

We all have a bucket list of things we wish to do before we die, whether it is spending a few nights in a luxurious and excluded bungalow overlooking Bora Bora’s turquoise blue lagoon, witnessing the enigmatic northern lights from within the confinements of a cosy wooden hut, dining at a three Michelin Star restaurant or simply challenging yourself to climbing up a spine tinglingly high mountain offering breath-taking views. Whilst I have one of those tucked away in the draw of my bedside table, I have over the last few weeks of living in Dubai, compiled one specifically for the UAE, which includes experiencing Michelin star Chef Nathan Outlaw’s newly opened Al Mahara restaurant, located at the base of the iconic Burj Al Arab Jumeirah.

Nathan Outlaw is easily one of the UK’s most prominent and charismatic chefs, specialising most particularly in serving excellent and simple seafood, which he prides himself on sourcing from his native Cornwall. His hard graft combined with his culinary ingenuity was rewarded at an early stage, as he obtained his first Michelin star at age 25 for his first venue ‘The Black Pig’. In 2007, he opened his second restaurant entitled ‘Restaurant Nathan Outlaw’, which has been awarded two stars by the guide, and remains to this day the only specialised fish restaurant in the UK to hold any Michelin stars. Since then, Outlaw has successfully grown his portfolio of restaurants to include: Outlaw’s Fish Kitchen, located within a 15th century fisherman’s cottage overlooking the picturesque harbour of Port Isaac in Cornwall; Outlaw’s at the Capital, set in the prestigious 5-star Capital Hotel in Knightsbridge, and of course Nathan Outlaw at Al Mahara in the Burj Al Arab Jumeirah, Dubai.

Our much-anticipated evening begins with an almost mandatory pit stop at Gold on 27, the Burj Al Arab’s ritzy bar situated at the very top of the architecturally acclaimed building. After a nerve rattling ride in one of the world’s fastest elevators, we penetrate this haven of luxury whose floor to ceiling windows offer panoramic views of Dubai’s sprawling and craggy skyline to the East, and the tranquil Arabian sea to the West. The magnificently designed space is bedecked in gold leaf, a feature that runs deep within the hotel’s identity making it opulent whilst retaining a classy sense. The cocktail list is extensive, featuring a range of drinks evocative of the Middle East and specifically Dubai including ‘Scent of the Souk’, drawing attention to the ambience of Dubai’s famous souk through the use of fragrant herbs and spices, as well as an active aromatic Oud Oil lamp.

To access Al Mahara will involve navigating yourself through the impossibly luxurious lobby, which of course has touches of gold pretty much everywhere, and will see you take the escalator up to the mezzanine (1st floor) past the beautiful and symmetrical water feature. As you reach the top, take a moment to appreciate the gobsmacking grandeur of the hollow structure. To put it into perspective, I am told by one of the staff members that the Statue of Liberty (Yes, you read that right), could actually fit inside with room to spare! Wow factor guaranteed.

As you reach the entrance of the restaurant you’ll be made to go back down one level via an elevator, which is of course plated in gold (what else?), but also redolent of something straight out of Jules Verne’s classic novel 20,000 leagues under the sea. It literally feels like we are embarking into a capsule, albeit a deluxe version, with the depth of the ocean as our final destination. Exciting! This feeling is further accentuated by the restaurant’s design features, which sees, for instance, the back of chairs shaped as the shell of scallops. But what perhaps is most reminiscent of an underwater world is without doubt the fully functioning aquarium built at the centre of the restaurant. Here you see various species of fish and reef cohabit, including a fairly large and impressive moray eel and a school of jack fish who furiously circumnavigate the edge of the aquarium.

Whilst the ambiance is most certainly within the fine dining bracket, with a strict dress code (guys don’t even think of rocking up in a t-shirt), the mood retains a welcomed and relaxed feel. Nathan tells me that this was one of his first amendments implemented after taking over what he felt was a borderline stuffy and overly fussy establishment. Gazing at the stunning interiors and totally surreal décor, one question springs to mind which I fire at Nathan – what could have possibly driven you to open in such a particular and lavish hotel when your other venues are perhaps more a little more quaint and traditional, such as Outlaw’s Fish Kitchen, built within a 15th century fisherman’s cottage?

“When I was first approached, I thought someone was playing a joke on me! However, once I realised this wasn’t the case, the prospect of opening at Al Mahara was very interesting, after all opportunities like this don’t come along very often! Pete Biggs, who at the time was one of my Head Chefs in the UK, had mentioned that he would like to take up a new challenge and I knew that he would be just the right person to head up the team at Al Mahara for me. Once I had visited Dubai and looked around at what I could work with here I couldn’t resist the challenge for myself either!

Al Mahara might be worlds away from my other venues but it’s unique character brings it in line with being ‘quaint’ in a different way and it’s definitely something quite out of the ordinary so really, it fits in with me very well.”

With my curiosity satisfied, we are sat and within minutes our rockstar sommelier for the evening brings a glass of Rose Laurent-Perrier and our tasting menus, consisting of a concoction of some Pete’s and Nathan’s signature dishes.

As an appetizer, we are served oysters, garnished with lightly pickled jalapenos and gherkins with a touch of coriander laid on top. Now, many purist gourmets will argue that oysters should be left untouched, in terms of its flavouring, in order for it to fully retain its naturally occurring iodine hint. In certain parts of South West France, sprinkling Tabasco on them for instance is considered to be a cardinal sin. Here, it’s clear that the condiments do not hinder, as the iodine fragrance hits my palate first before the tangy sweetness of the gherkin does and spice of the jalapeno thereafter. It’s only the first dish of a series of seven, but I am grasping why Nathan was described by The Good Food Guide in 2010 as a “wizard”, able to “produce something exceptional with simple, fresh ingredients”.

Our second dish of the evening is a lobster and king crab cocktail with kohlrabi and caviar, paired with a beautifully crisp Gaja Ca’Marcanda Vistamare 2016 of the region of Tuscany.

One of the issues I raised while catching up with Nathan and Pete, was regarding the provenance of his catch. Whilst the UAE is a peninsula encircled by water on three sides, Nathan tells me that there is in fact very little seafood he gets here, as surprising as that sounds. His fish predominantly comes from the merchant Wings of St Mawes down in Cornwall, who themselves have folks at the market in Newlyn scoping the quality of the fish, which is then flown to Dubai that evening ready to be worked on at the restaurant the following morning. He adds, “I must admit, initially there were some hiccups in the chain of supply, but we now have it to the point where things are seamless”, which is reassuring to know!

Next is are the Hand-dived Scallops & Mushroom Risotto, Truffle and Seaweed paired with sumptuous Roux Père and Fils Chassagne–Montrachet ‘Les Chaumes’ 1er Cru 2015 Burgundy, France. A beautifully worked dish, creamy in texture, utterly flavorsome and deeply satisfying. We then indulge into my favorite dish of the evening – the Cornish turbot, which comes with Bok Choy and a Porthilly Crab Sauce to add an Asian touch to the dish.

Desert is the dark chocolate and hazelnut torte, cocoa shortbread and orange marmalade, which has the effect of sending my senses, at least my visual and savoring ones, spiraling out of control! The shortbread’s texture contrasts beautifully with the dark and ever-so-indulgent chocolate and hazelnut mousse that lays above the crumbly biscuit. The orange marmalade helps cut through the richness effectively and means you are not left wishing you’d not eaten it.

Al Mahara is a Middle Eastern-class venue if not world. The quality of the dishes served, combined with the excellent wine pairing and great atmosphere, meant that we had fantastic evening. On top of this, service throughout was impeccable, especially our highly trained South African sommelier who was able to really break down to us the benefits of having a particular wine over another for each dish. A real plus in my mind.

Yes of course Al Mahara is not a cheap outing and there will be a fringe of dinners who will look for ways to complain that the price tag on the tasting and a la carte menus are too high, to which I would respond, “what can one expect when dining in the most luxurious and exclusive hotel in the world?”