Rise of the Restauranteur: Joel Kissin

Unless you’re in the restaurant or property business, chances are you don’t recognise his name, but you will know of some of his past and present projects, including Quaglino’s, Guastavino’s and Boulestin, writes Rebecca Howe in FOUR’s International Edition

As recently as the 1990s, London’s restaurant scene was desolate. Granted, there was Le Gavroche, and the great Roux brothers, which had been around since the ‘60s and, at the time, had three Michelin stars. But both the French and American gourmands mocked English cuisine, or rather lack of it. They still do, in some parts. But it’s also taken seriously, (very seriously, indeed) and is now considered home to one of the fastest evolving restaurant scenes in the world.

What changed? Several notable chefs and, importantly, restaurateurs, who came along and invested time and money, slowly, but surely, changing the dining landscape of the capital.

One such chap is Joel Kissin (pictured left). The lesser-known co-founder of Conran Restaurants (now D&D London), who, along with Sir Terence Conran, launched the group in 1991. They were responsible for pioneering restaurants such as Le Pont de la Tour, Quaglino’s, Bluebird and Coq d’Argent, all in London, and bringing about a newfound respect for the city’s restaurant scene.

Although Kissin parted ways with the Conran group in 2001, D&D London still owns and operates over 30 well-known restaurants, not just in London, but also in Paris, Istanbul, New York and Tokyo. After almost a decade away from the London dining scene, Joel returned in September 2013 with the arrival of Boulestin.

Sound familiar? That’s because Boulestin is named after the restaurant of the same name, which closed its doors after 67 years of service in 1994. The original was launched by French restaurateur, author and pioneering TV presenter Xavier Marcel Boulestin, whose eponymous Covent Garden restaurant opened in 1927. Described as ‘the most subtle, imaginative and liberating food writer of his generation’ and a major influence on the work of such culinary greats as Elizabeth David, Xavier Marcel Boulestin’s legacy is still felt to this day—particularly now, thanks to Kissin’s revival of Boulestin restaurant.

Boulestin serves classic French fare, with dishes including the cassoulet, Dover sole Meunière and pan-roasted Poussin Forestière. Joel has reignited the passion that once lived within the original restaurant—so far receiving glowing reviews from critics including A.A. Gill of The Sunday Times, London.

The main dining room sees tables lined with pristine white tablecloths, mirrored walls and images of the bygone era. There’s also Cafe Marcel, with a long bar and a more informal dining space. Both the cafe and restaurant offer the old school appeal of a classic French restaurant without coming across as a caricature or some overpriced tourist trap.

Kissin is attempting to reinstate the grandeur and glamour of the original in London’s St James’s, while at the same time curating the story of the formidable character who first brought glory to London’s dining scene over a century ago.

And no better man to restore Boulestin to its former glory than Kissin. It was back in 1986 that Sir Terence first met Joel, who was then running one of his favourite restaurants, Hilaire, in South Kensington, London. Conran asked Kissin to join Simon Hopkinson, Hilaire’s then chef, to help them launch Bibendum in 1987.

Located in the newly refurbished Michelin Building, just around the corner from Hilaire, Bibendum was an instant success, so much so that Sir Terence asked Joel to join him at his new restaurant development in Butler’s Wharf, London.

The original idea was to develop something along the lines of Bibendum. It was Joel, however, who realised that Butler’s Wharf needed more than a standalone restaurant. He persuaded Sir Terence to take on the adjoining site, thus almost doubling the size. The result was a bar and grill, a food shop, a wine merchant, an oil and spice shop and a bakery, resulting in a development that attracted huge footfall and which would contribute to the eventual success of Butler’s Wharf as a whole.

Before the restaurant could be developed, Butler’s Wharf itself fell victim to the recession of the early ‘90s. While carrying on negotiations with the receivers, Kissin began looking around for another project. The one that caught his eye was the former ballroom of the old Quaglino’s restaurant on Bury Street, St James’s.

Having worked out a deal with the Butler’s Wharf receivers that mirrored the original agreement, Kissin then finalised the purchase of the long leasehold interest in Quaglino’s, along with the name.

Kissin and Conran first opened Le Pont de la Tour (which would later, in 1997, famously host a dinner for the Blairs and the Clintons) and Cantina del Ponte next door, before Quaglino’s grand opening took place on Valentine’s Day 1993.

Quaglino’s was a huge hit with critics and the public alike. The place attracted celebrities, rock stars and royalty and tables were booked for weeks in advance.

Kissin parted ways with Conran Restaurants in 2001, with Joel selling the remainder of his business interests to Conran Holdings. From there Joel spent the remainder of the noughties in property development in New York City and East Hampton, Long Island. Some of his notable projects include a 6,000sqft brownstone on the Upper West Side, a 2,600sqft penthouse on Fifth Avenue and an 11,500sqft mansion on two landscaped acres in East Hampton.

It is, however, his return to the restaurant business, particularly in London, that has brought excitement to his many spectators. 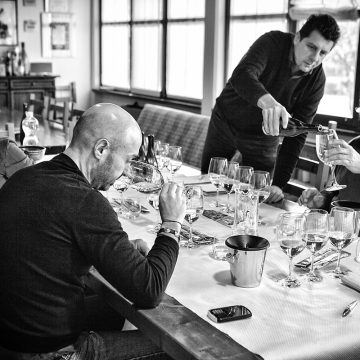 The lesser-known counterpart to Batali & Bastianich Hospitality Group, Joseph Bastianich, is a man of many talents with a fascinating tale, writes Simone Miché…

For electrician turned award-winning chef and restauranteur Mark Best, cooking is both an art form and a source of “eternal dissatisfaction”, writes Jo Stewart for FOUR International.