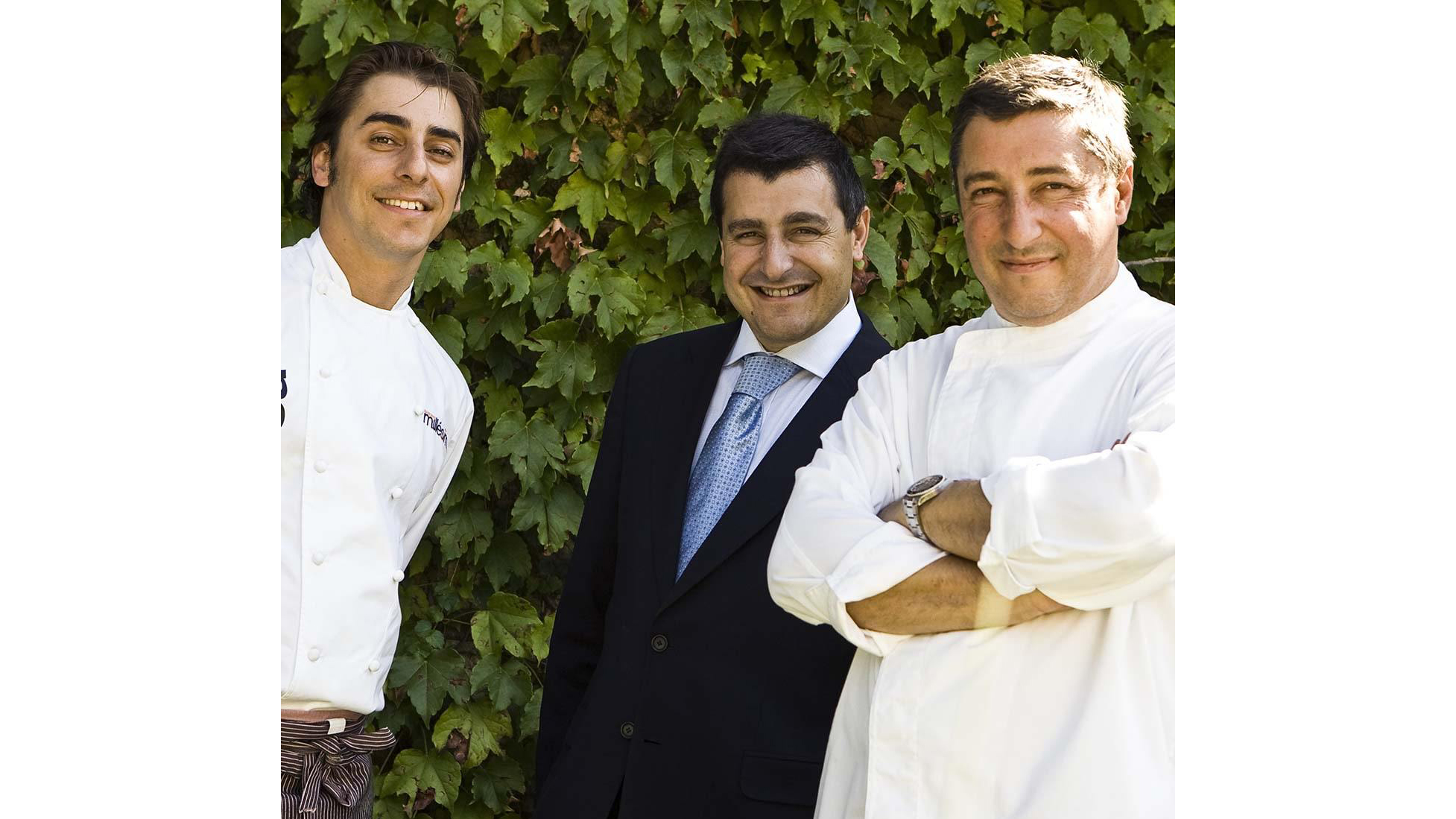 Heading into the kitchen at Celler de Can Roca it is clear that this restaurant is family run, Joan is responsible for the Savoury, Josep the sommelier and Jordi takes charge of the sweets.

The success of the three brothers is clear to see as the restaurant was awarded its 3rd Michelin Star in 2009 and is the 2ndbest restaurant inStPellegrinolistaccording toRestaurantMagazine. El Celler de Can Roca is possibly the least well-known restaurant to have ever held the much-vaunted number-two spot on the list, this secrecy has allowed the three brothers Roca to get on with what they do best.

Classic Catalan cooking is at the heart and Chef Joan Roca uses food references that are from the vivid memories he has of his mother’s kitchen. In 1986 the restaurant expanded by building an annex and quickly began collecting Michelin stars. Using his mother’s influence as a starting block, Joan took the love of cooking and went to a culinary school in Girona. Taking the time to travel around the world Chef Roca learnt from some of the best including Chefs Frédy Girardet and Joël Robuchon.

The brothers at El Celler de Can Roca, view the dining experience as one intimately tied to all the senses. This culinary trio work as one, providing some of the best food in the country.

Their ’emotional cuisine’ menu focuses on the traits of each dish, whether conceptual, chromatic, or evocative of “memory” guests can’t help but be transferred to another place or can trigger childhood memories. Under Josep’s command as sommelier, the wine list has developed along five branches: Riesling, Champagne, Burgundy, Sherry, and Priorat (a Catalan denominated wine). Desserts compete in the global arena of the avant-garde, with Jordi’s development of an edible perfume as the foundation in at least one example, the ode to Terre D’Hermès.

Joan Roca respects tradition but is not driven by it in, in fact, his dishes succeed because of his careful attention to balance, creating plates that contain sweet, savoury, sour and salty notes, all in harmony. He also embraces modern technology; using sous vide to create some of his signature dishes, such as Iberian suckling pig. Dishes are always plated to perfection, with vivid colour intermingled in there simplicity. Behind the food the Roca brothers really work together, each taking turns contributing their ideas.

It suddenly becomes clear how his work on the wines is all part of this unusually reigning harmony so characteristic of the Roca kitchen. Josep Roca is a purveyor of wines and aromas; he separates the tastes of the wines to ensure the food is complimented to perfection.

Expansion was inevitable, but Joan and his brothers have taken their time in order to maintain artistic control. Their second restaurant, Moo, is located in Hotel Omm in Barcelona and is decidedly different from its Girona counterpart. It is connected to the main lobby and has a Japanese vibe, with dark wood accents and sleek seating. A new menu was created to complement the new space, and Joan makes the trip from nearby Girona often to oversee the kitchen and hand-picked staff.

When I was a little boy I felt very much at ease behind the bar counter. I liked to watch from the side-lines. When I was 9 or 10, I started playing the waiter and used to go downstairs to the basement of Can Roca to refill wine bottles that patrons drank upstairs. At the catering school I began to see the possibilities that the family business could offer. Mr Andrew, my front-of-house service teacher, helped me understand that a waiter’s task is to transfer knowledge. In order to do that, in addition to having in-depth knowledge, waiters must be prepared to answer any questions that patrons may ask about how dishes are made. Waiters are the chefs’ ambassadors at the front of house.

After I finished school, I met a wine-grower from the Priorat region, Josep Llusi Perez Verdu, the owner of Mas Marinet and the Oenology professor. He helped me to navigate the vast ocean of knowledge surrounding wine: soil characteristics and their impact on vines, how bottles are stored in cellars, etc. He taught me what you do not find in books: day to day contact with wine.

Our memory stores sensations and at the same time is a source of pleasure; so much so that the former –sensations- are but a promise of the latter – pleasure-. Olfactory memory is key to emotions in cuisine. Memories are like little drawers, where we keep the bits and pieces of our life story in the form of sensory inputs. The latter activate neuronal networks at specific times and thus bring about pleasure, desire, and generate the need to experience certain feelings again.

Landscapes are key elements in our cuisine: seasonal changes, with all the feeling that we hope to get from ephemeral ingredients; past experiences, time that stands still in a dish, a memory as the starting point for a new recipe.

This relationship between effective conscience and emotional state is a starting point around which we intend to develop our forward-looking cuisine. This cuisine that Pau Arenos described as techno-emotional, which helps us bring dishes closer to certain memories and travel through time and space.

The cuisine at El Celler de Can Roca relies on painstaking analysis of each dish. The basic idea is to consider creativity as a way to convey feelings. The goal of our research efforts is to generate states of mind, while trying to find the perfect match between the sensory and emotional description of all the ingredients that make up the dish. Thus, we know that milk desserts take us back to our childhood and arouse feelings of tenderness, or that an acid taste and edible flowers are associated with euphoria and joy.

This is the only way. If cuisine is to make perfect sense, one needs to carefully study why things happen in the first place. Technology also plays a role. Distillation enabled us to separate a product’s soul from its body, making it possible to eat the impossible; earth.

When you eat the earth distillate, you go into a very interesting emotional shock. It feels like taking a leap in the dark; although the smell is familiar, the carrier is totally unknown.

Once you have tasted it, your mind relates the scent of earth to a certain state of mind, the feelings of nostalgia and melancholy engendered by the smell of damp earth, memories of rain, moss, nativity scenes…Personal experiences that have to do with the past, with time, with childhood memories.

The Pharmacy bar in Belgium takes you on a voyage of discovery with this recipe for their cocktail, Pineapple Express…