Proof of the pudding

From a life-changing moment in Saint-Etienne to gaining three Michelin stars, Sergio Herman is the Dutch chef with his sights on Antwerp, writes Kerry Spencer

“I learnt all of the basic tastes and recipes from my father. This was one of the best trainings and souvenirs of my life. It was very important to me and he was a huge influence on me. ”

“Growing up in the restaurant of my parents, Oud Sluis, I used to clean mussels at the weekends, working in the kitchen and the restaurant,” says Sergio, the well known chef of the Dutch province of Zealand.

Sergio also inherited a passion for the rich quality of Zealand’s land and sea. “If you are born here, you are born with the sea. Most weeks I go for walks on the beach and sit thinking about things. You smell and taste the sea, along with its produce. It’s a big inspiration to me that everyday we have fresh produce from the sea. I’ve been working here for 24 years, with this inspiration all around me. It is a very rich area, not just the sea, but the land, too.”

Sergio’s parents not only encouraged him to work in the restaurant during weekends and school holidays, they also treated their son to experience other restaurants. “My parents would like eating out. We’d travel a lot and go to the best restaurants in Belgium and the Netherlands.”

After training in colleges in Holland and Belgium, Sergio headed back to the small town of Sluis. “After school I went back to the restaurant, as my father was sick. I’ve been here ever since.

“As well as training at college, my father also trained me in the kitchen. He taught me to make traditional sauces and I learnt all of the basic tastes and recipes from my father. This was one of the best trainings and souvenirs of my life. It was very important to me and he was a huge influence on me.”

During the early years of Sergio’s time working in the restaurant, once his training was complete, he reached a turning point in his career; it was brought on by an encounter with Pierre Gagnaire, which made Sergio decide he had to up his game.

“At this point in time I was finding my own style of cooking. Then I went to eat in Pierre Gagnaire’s restaurant in Saint-Etienne. At that moment I thought to myself, ‘You are a fucking idiot.’”

Sergio describes the experience in his book, Sergiology, which was released last year, as “a wake up call.”

And so he did. Sergio’s insatiable appetite for creativity has led to three Michelin stars, with Oud Sluis ranked 21 in The World’s Best Restaurants list (2012).

“For me, it is very important to create your own style.” He says: “We have a lot of restaurants in the world, but not many of them have been able to create their own style, with their own vision.”

Sergio’s style is influenced by many factors; art, fashion, design and architecture. Sergio’s interest in the crossovers between art, design and cooking led to the creation of Sergiology in 2012. A 360-page tomb of recipes, it is far more than just cookery book. Presented in a black linen box, containing an audio device, inspiring photography by Stephan Vanfleteren and Tony Le Duc, plus a comprehensive compilation of Sergio’s inspirations, including a tattoo artist, an architect, a fellow chef, the sea, a female artist and DJ. The audio device provides the option to listen to, as well as read, Sergiology.

The inspiration to make Sergiology came from Sergio’s numerous trips to museums. He explains: “When I visit cities in Europe, or the rest of the world, I go to museums and I’m always looking for new sources of inspiration and creativity.

“Three or four years ago I had the idea to make Sergiology. If you are in a museum and you have one of those headphone sets it has a curator or artist speaking about the art. That’s when I had the idea to create the cookbook and put it together that way, so people could delve deeper into my way of thinking. So people can understand how I make a dish.”

Outside of the kitchen, Sergio takes solace in Ibiza, which is also featured in Sergiology. “It is my home, where I go to relax and forget everything,” he says. “Here I want to grow old and occasionally fish, prepare fresh almonds and pick herbs. Whenever I land in Ibiza I think to myself, ‘I’ve arrived home.’

“I feel an energy, vibe and atmosphere [in Ibiza] that I can’t find anywhere else in the world.”

Sergio’s priority at Oud Sluis is to remain true to himself: always creative, pushing the boundaries of culinary architecture. “This is so important. To see it, feel it, taste it and always have your own style.” He explains: “As a cook, in the beginning, it is important that you have a good restaurant with a lot of supporters, who visit you and have a nice meal.

“If reporters start coming, or the Michelin Guide, and they give you points or stars, of course, it is nice. But for me, in my life right now, I look forward to maintaining a standard and I just go for it.

“I am a lucky man and I am very grateful for the awards, but there are more important things in life than the awards.”

This year will see Sergio put the finishing touches to La Chapelle, a new restaurant and bar in Antwerp, scheduled to open spring 2014.

“It’s in an old chapel, the former chapel of the military domain. I worked with the famous Dutch designer, Piet Boon, who has created the space. There’ll be a bar and restaurant seating around 40 guests.

From ‘Cake of Peace’ to ‘Rosary’ both making an appearance in Sergiology – Sergio’s creations are far greater than just a simple plate of food. They are a work of art. The proof really is in the pudding, he muses: “You must eat my food to fully understand my style.”

A Recipe by Joakim Prat 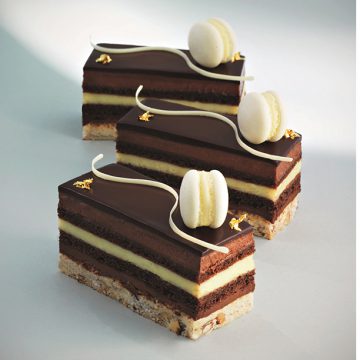 Master patissier and chocolatier William Curley shares this recipe for a citrus slice from his latest book, Patisserie…