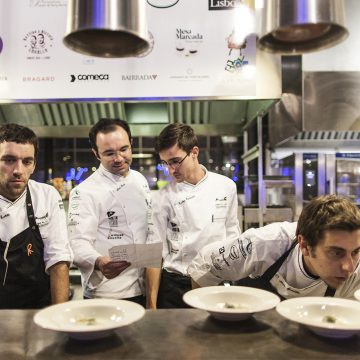 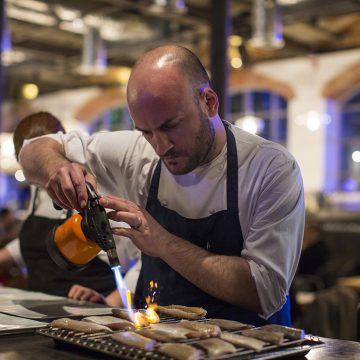 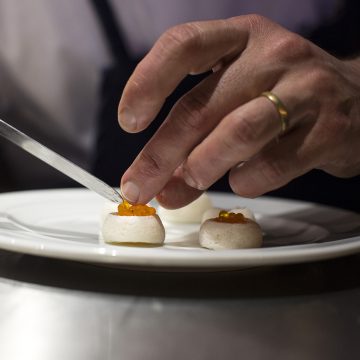 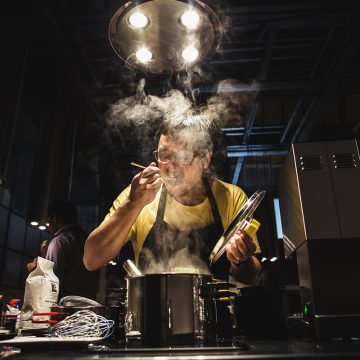 Every year in April, those in the Lisbon food and wine scene get excited about a small yet unique gathering.

Peixe em Lisboa is not as big as Madrid Fusión, nor as well organised and full of surprises as San Sebastian Gastronomika, and certainly not as busy and overwhelming as Mistura in Peru. Now, you may ask yourselves what could be so special about ‘another food event’. However, this event has something different to offer – a central theme that never changes and a big heart for emergent chefs and artisans.

It is all about fish! Peixe is the Portuguese word for fish, and local chefs and colleagues from all over the world are invited to present their work around that central theme.

The list of chefs on the cooking stage at this year’s event was very inspiring: Portuguese-born chef, Leandro Carreira, was one of the emergent stars. But we could also see several established chefs presenting their work with fish. Moreno Cedroni of La Madonnina del Pescatore in Italy, and Josean Martinez Alija of Nerua in Bilbao were the big names at Peixe em Lisboa this year, and the guests were very enthusiastic about their avant-garde ideas and techniques related to fish.

One of the top emergent chefs from Brazil, Thiago Castanho, presented Amazonian Fish on the Show Cooking stage. He prepared them with a number of unique techniques of his region, including the use of tucupi – the juice of a type of cassava that is poisonous but becomes a delicacy after undergoing heat treatment. His restaurant, Remanso do Bosque, is inside the Amazonian forest area, and Castanho presented classic Amazonian recipes, and some of his innovative ideas. The guests at Peixe em Lisboa were able to see specimens of Amazonian fish on display. He also offered edible flowers, from the curious Jambu plant, which can provoke a feeling of light electric discharges and numbness in the mouth.

A parallel event presentedYoung Chefs With Guts! – run by the group, Sangue na Guelra (meaning Blood in the Gills), a partner to Peixe em Lisboa, was also creating a buzz in Lisbon and in the social networks. The founders of the group – photographer Paulo Barata and philosopher and journalist Ana Musico, organised dinners with top emergent chefs at an unforgettable location – the LXFactory. This is a former factory turned into an urban-underground complex surrounded by artists’ ateliers and other studios. Graffiti and other urban art is much in evidence.

In an experimental atmosphere, the international guest-chefs received their fresh produce, talked to producers and prepared tasting menus with their own signature. The guest-chefs were: Leonardo Pereira (of Noma in Copenhagen), Alessandro Negrini(of Il Luogo di Aimo e Nadia, Italy), Hernan Luchetti and Nacho Baucells (of El Celler de Can Roca, Spain), Sven Wassmer from Focus in Switzerland and Carlos Fernandes (of M.B. – a Martin Berasetegui restaurant in Tenerife). A group of emergent Portuguese chefs – João Alves, Francisco Gomes, and João Simões – shared the kitchen with the guest-chefs. Two solo dinners were presented by Yoji Tokuyoshi(ex right hand of Massimo Bottura at Osteria Francescana, Italy) and chef Leandro Carreira (ex right hand of Nuno Mendes at Viajante in London). Both chefs have recently left their jobs, and hope to open their own restaurants soon. (Take a look at Leandro’s menu here).

Sangue na Guelra, which had already proven to be a great success in 2013, organised this year at Peixe em Lisboa, the first symposium embarked on the theme “Producers and Products”. Scientists, producers, journalists and food experts were invited to present their ideas and personal experiences at the event. João Henriques, a farm designer and environmental scientist, presented an exciting project about growing plants in urban areas. His project is coming soon to London to help chefs implement a real zero km production of vegetables and herbs. Leonardo Pereira, shared his Noma experience with guests, and interested them in his close association with local producers. Enrico Vignoli, of Osteria Francescana, presented statistics about the food chain and shared his profound thoughts about it with guests.

On top of all the activities, Lisbon provided an extra bonus of bright sunshine. According to the organisers this is an essential part of Peixe em Lisboa, together with great Portuguese wines, delicious food and warm-hearted people! And I am happy to concur!

Find out more about Luciana .

Try at hand at this fabulous dish from Chef Ana Ros ahead of her appearance at Northcote on Sunday 29th January.

Eric Ripert shows why he still tops the polls with this this elegant recipe for sea trout with finger lime and trout roe creme.

Lanshu Chen shows off her exceptional cuisine in the new book from The Northcote’s annual culinary event, Obsession.