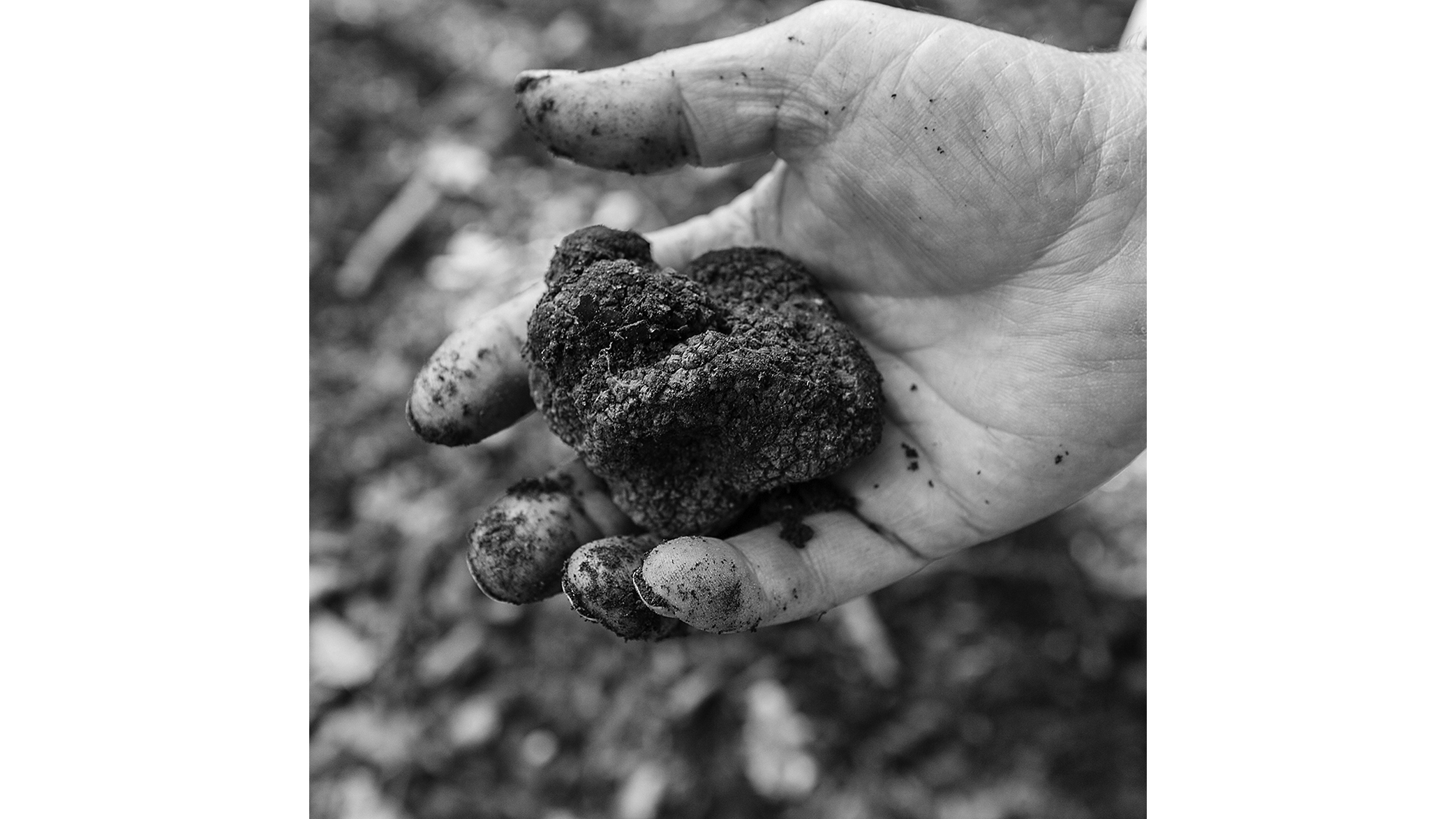 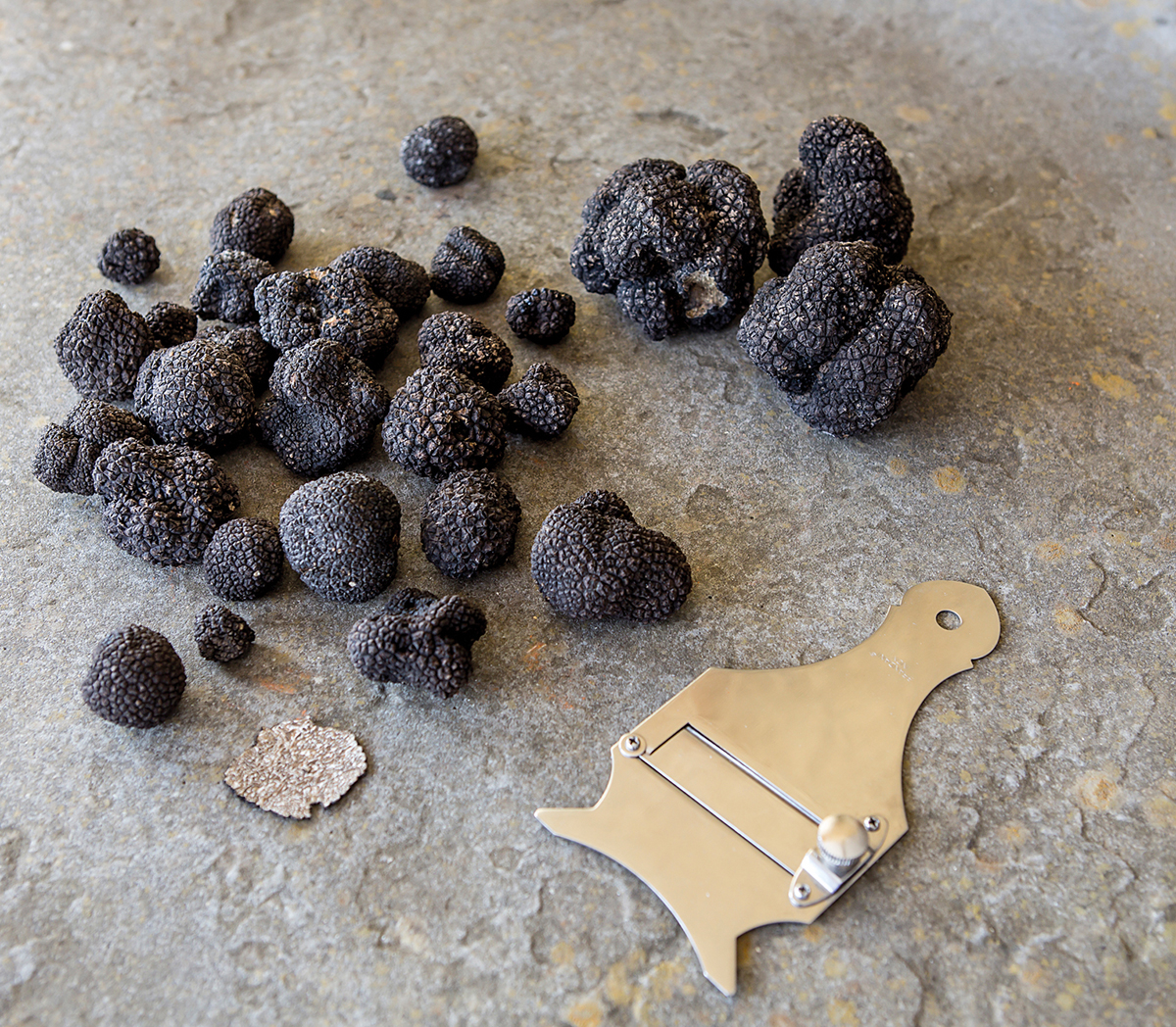 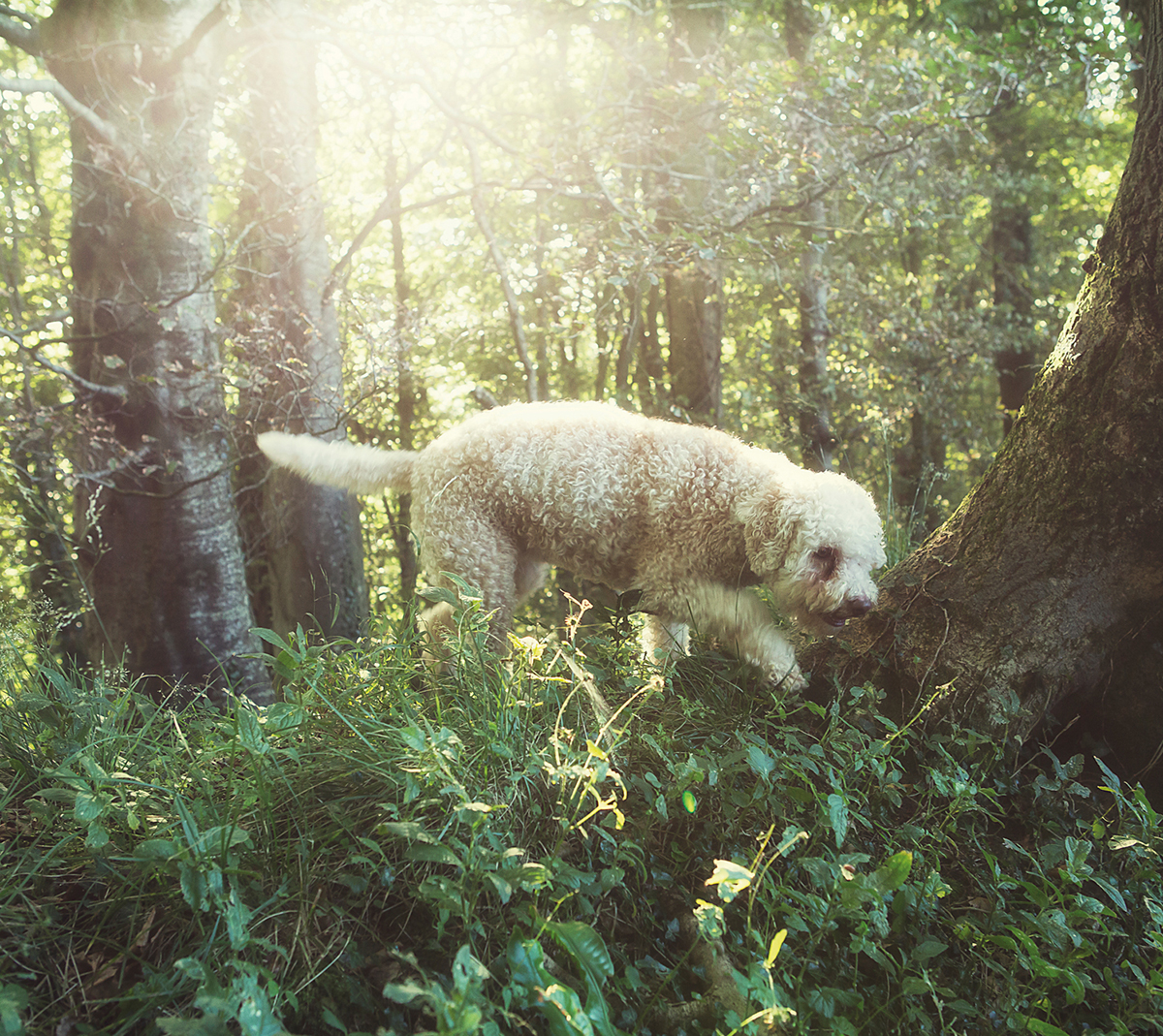 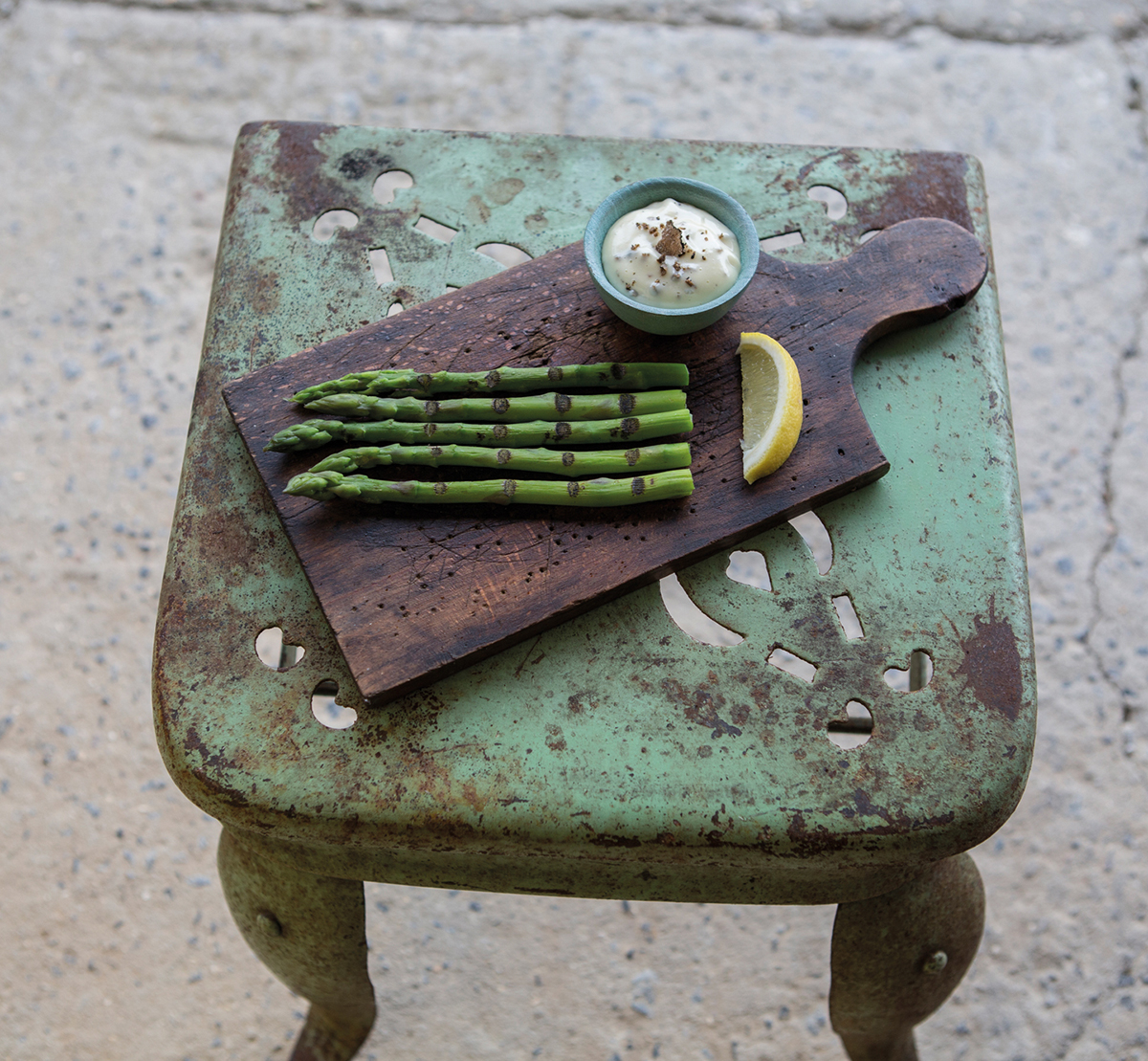 Thought truffles were only cultivated on the continent? As Marion Dean explains to FOUR, we grow some pretty special ones on British soil, too…

Whenever I’m asked what it is I do for a living, there’s always a long silence after I’ve answered. Of course, I milk it. Being a truffle hunter in Britain isn’t common practice, you see. I do other things, too. I train truffle hounds, harvest truffles for private landowners and I also have my own truffiere (truffle orchard), here in Somerset.

For me, it all started when I read an article on truffle orchards in the autumn of 2006. I was smitten. Gone, without any hope of recovery. The problems (there were plenty) were put on hold while I got on with the bits that were feasible.

A new puppy, Mufti, was the first acquisition I made. Historically, truffle hunters worked with pigs to hunt out the good stuff, but I wasn’t so keen. Announcing that I would train my own puppy, I was immediately asked if I could train dogs for others. Can you see how one thing led to another? Looking back, I don’t know how I was so confident, but I never doubted for one moment that this whole enterprise would be a success.

A mere hundred years ago there were whole families who earned their living from truffles, such as the Yates’ and Collins’ of Wiltshire. In reality there were probably truffle hunters for every major estate in all good truffle-producing areas of Britain. Information was passed from father to son so that valuable truffle locations could be kept secret and stay within the family. But what happened next? The industrial revolution, a Great Depression and social and industrial upheaval changed our way of living virtually beyond recognition in the 20th century. Out of sight and out of mind, truffles became the best-kept secret of all.

The most common type of truffles found on British soil is the Black Summer Truffle, which offers a long growing season in this country. Truffles aided and abetted this secrecy by growing underground and out of sight.

Truffles are not only hard to find, they are also extremely difficult to cultivate. By the end of the 1960s, scientists were developing techniques for impregnating the roots of seedling trees with truffle spores. Most of this research was done in France and Italy, eventually producing reliable supplies of impregnated trees for the commercial market. Each decade seemed to produce fresh advances in cultivation although the exact techniques were closely guarded secrets.

Truffles, however, still like to hold the upper hand. It can take five to ten years, or even longer in some cases, before an orchard produces truffles, while other orchards fail to produce at all. Despite this, a fresh wave of interest has spread to this country.

Without giving too much away, I now know of a couple of sites here which have produced cultivated truffles, but it will still be a while before these sites develop the strength to reach commercial quantities. In the meantime, the very few genuine British truffles that are found on private land are in big demand.

Imports, however, are easy to come by. These can be bought online, but I always add the warning that people should work out the price per kg before parting with silly money.

Talking money, buying a truffle should not involve remortgaging your house. As you read this article we should be in the midst of the truffle season when you can buy truffles at their most reasonable price. I usually start selling at about £260 per kg. Buy 30g or 40g for your first go, which will set you back about £8 to £10, or thereabouts, for your truffle. I could create quite a wonderful taste experience with that much truffle either as a nibble for a larger party or an indulgent feast for two.

As we move towards the end of the year, truffle prices steadily rise. In England, the price is not regulated, it is market driven, easily ending up at £600 to £900 per kg. Those sales can almost be called modest when compared with some online.

Like other crops, truffles are also affected by the weather. In the last three years we’ve had more than our fair share of extremes, but by and large we’ve had quite a good climate for the summer truffle, enough warmth to encourage growth and enough moisture to keep the soil just damp.

I have found ripe ones as early as May and late ones as late as March. Yes, that does only leave April—I’m working on it! Of course, the bulk arrive in the months of August through to November. All this information I am gathering is carefully noted and hopefully might be of use if and when my own orchard starts producing.

I find truffle hunting more exciting now than I did when Mufti was a puppy. That might sound strange, but in the beginning there was a huge amount of pressure to get results. I use truffle oil for training and nearly all truffle oil is synthetic, which at least guarantees it will give off the correct aroma as far as a dog is concerned. Mufti did her training with indecent haste. By the age of five months she charmed journalists and television producers with consummate ease. She understood she had to tell me where the truffle was, never once did she try and take it for herself or have a quick nibble of the profits!

It’s important to watch every move Mufti makes so that I can understand what she is telling me. We work in near total silence yet we are in constant body language communication. The setting for all this could not be more beautiful.

I favour the wonderful beech woods we have on the chalky downlands, because beech trees can be such generous truffle hosts. There are several other trees that host truffles too—the mighty oak, the easily recognisable silver birch and the hazel, to name but a few.

All the time Mufti is under the ‘working’ command I am expecting her to ‘indicate’ at any moment. She tells me she has found a truffle by lying down with the truffle between her front paws. She takes her work very seriously and each find must be paid for on the spot with a piece of cheese!

Finding the truffle is just the first part of the job, once home, it’s time for cleaning to start. Cleaning truffles involves washing them under cold running water and brushing with a toothbrush to get all traces of soil out of its deeply grooved coating. It takes absolutely ages! Only when the truffle is immaculately clean can you tell if there has been any damage. The bad news is that my truffles are sought after and therefore I need to part with them. Sometimes, for research purposes only, you understand, I need to keep one for myself.

Everyone asks what my favourite truffle dish is. I used to say venison steak with truffle-buttery mashed potatoes. This is undeniably wonderful, yet absolutely simple. Truffles add another dimension to whatever you put them with, potatoes carry the flavour well and venison seems the perfect match. Perhaps it’s the ‘wild woodland’ connection in the back of our minds that makes it so appealing. Roasted pigeon breast on a green salad with truffle shavings and a very light oil dressing is another favourite.

However, if you need converting, I would spoil you with truffle squash soup with scallops and crispy prosciutto. I make squash soup in vast quantities, always using my own homemade chicken stock. Reduce your soup to really thick consistency, and at this point I personally like to add extra truffle shavings to the soup and keep it on a warming heat to let the magical truffle infusion start. Grill the prosciutto to crispy and keep warm.

Scallops are often recommended as a raw partner for truffles, but I prefer mine lightly sautéed. Assemble your dish by popping a slice of truffle under the scallop and any left over shavings as an extra gorgeous decoration.

Some of the truffles that I have found recently have been of an outstandingly high quality. Their flavour and fragrance have surprised many, including some chefs of high repute. Please contact me if you wish to purchase large or small quantities of truffles. I can harvest and post on the same day, therefore delivering them in the most fresh of conditions.No fast planes. No trains.Just excellent British truffles, provenance assured.

Do not attempt to make your own truffle oil—even if well meaning people show you how to do it. Raw truffle in oil could make a perfect incubator for botulism. It must be processed at very high temperatures to make it safe. Visit Marion’s website www.trufflehuntersdogschool.com for more information about her book Discovering the Great British Truffle and the new Taste of Truffle experience days.

Blending dynamic passion and modest charm, André Chiang’s philosophy is reflected in his food. Try this recipe to see why…