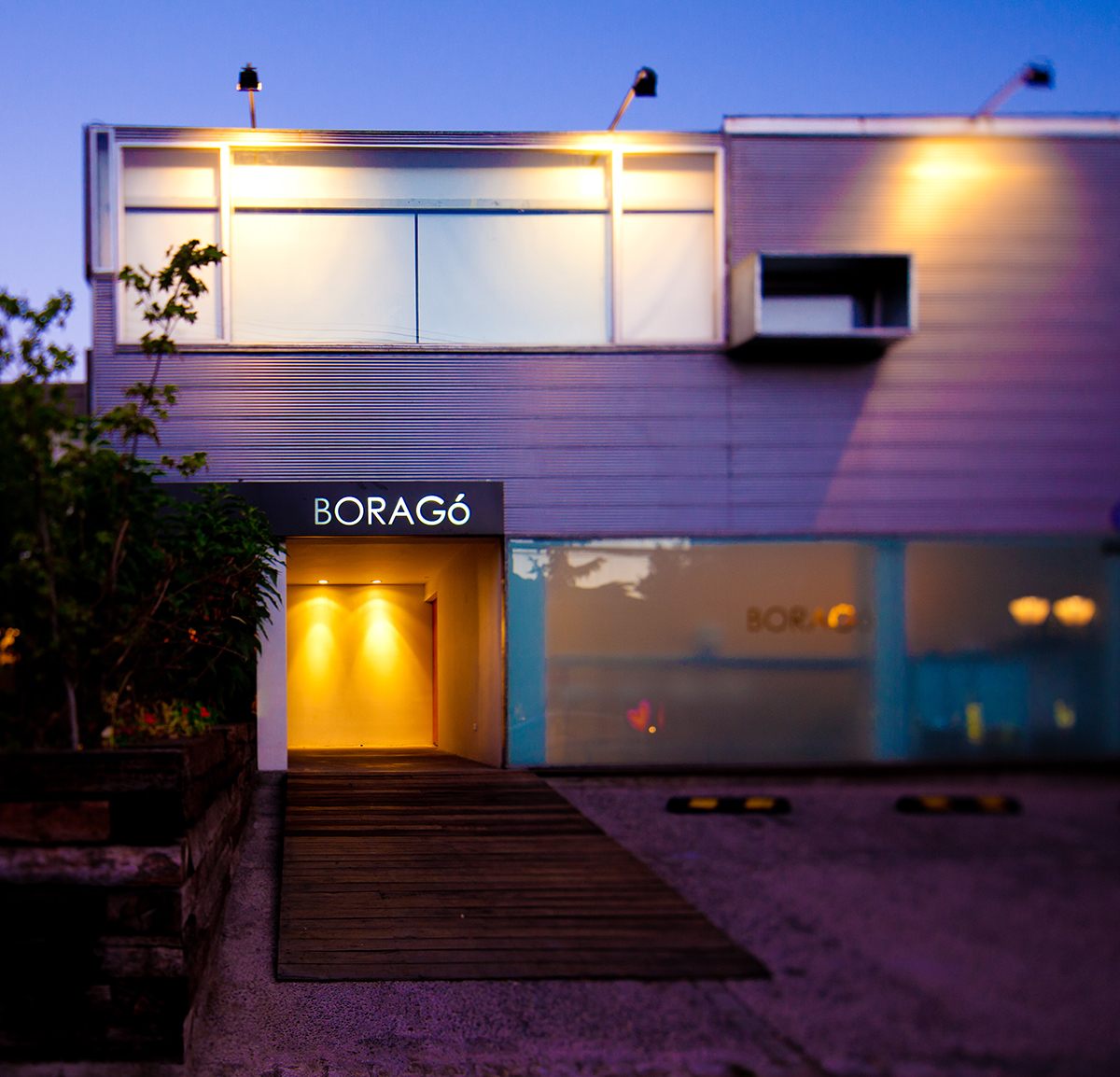 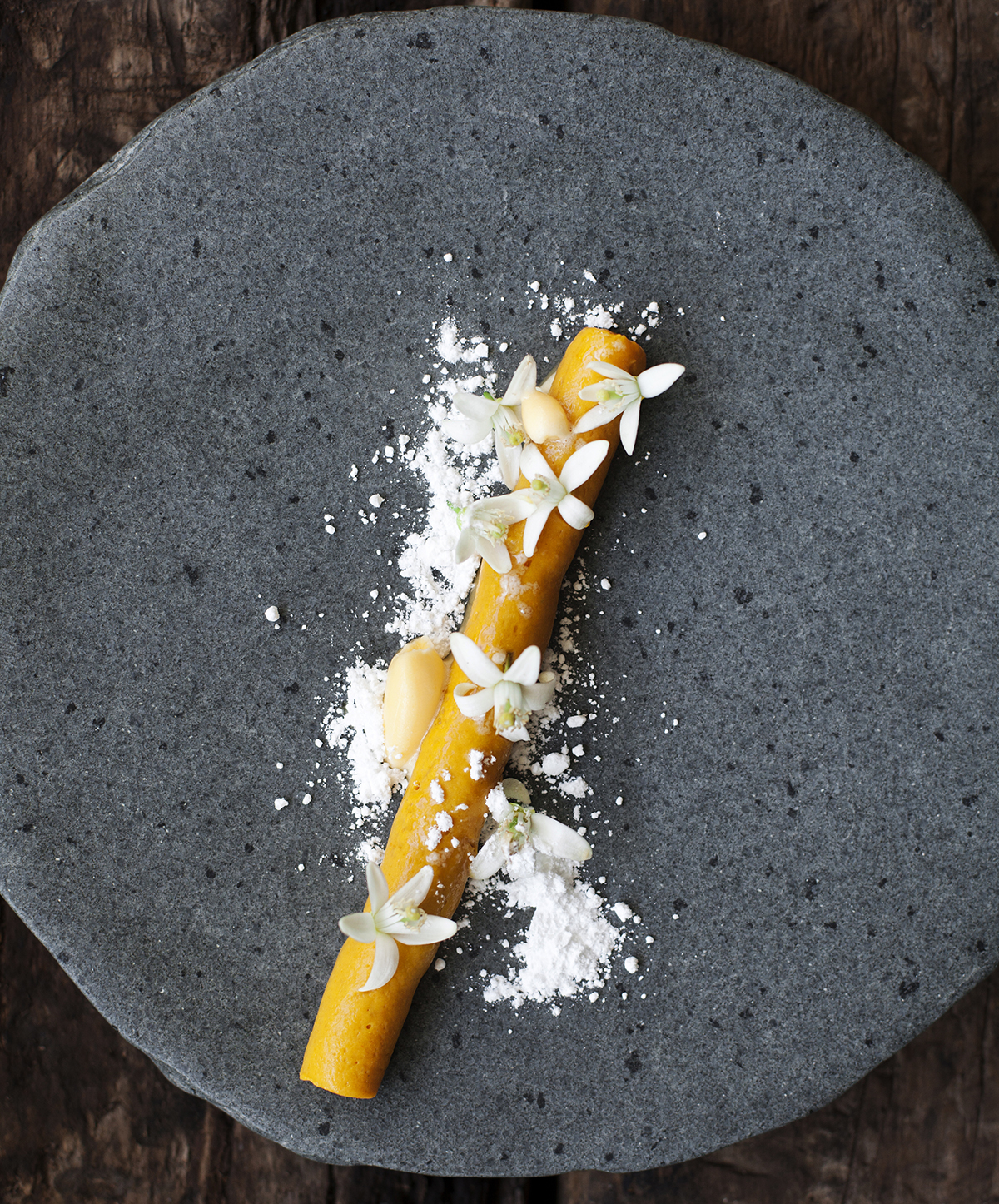 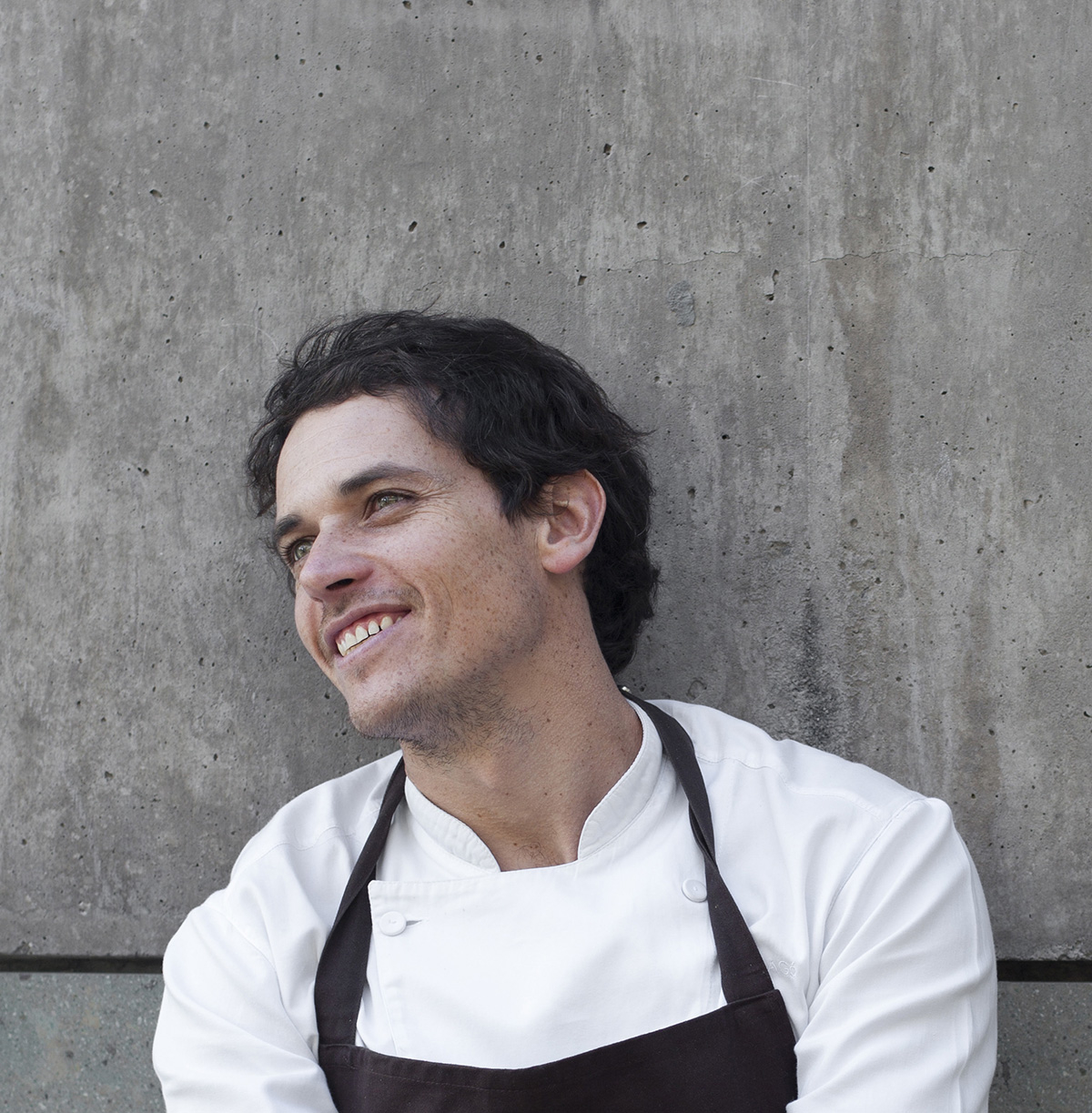 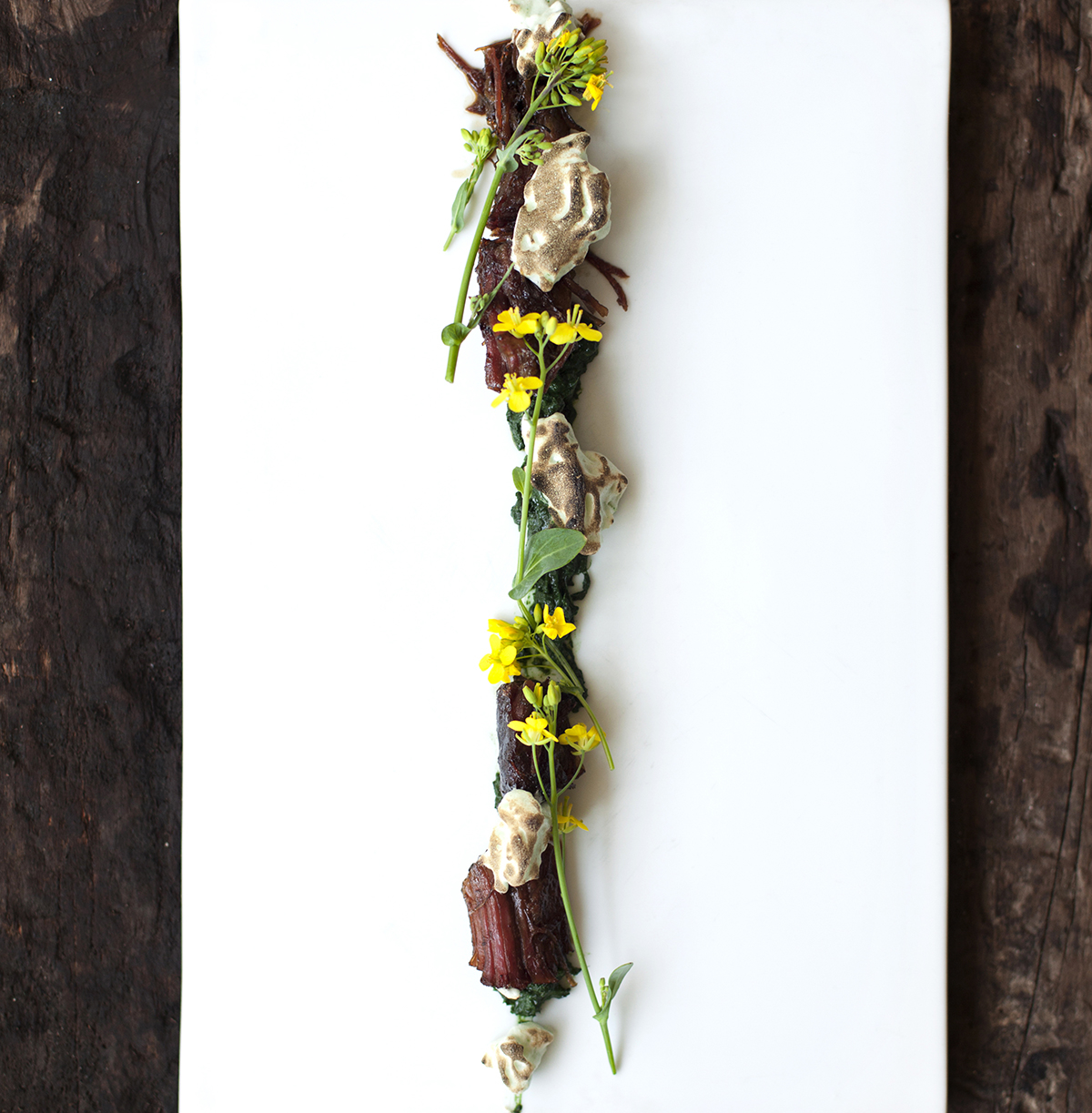 Native Cuisine of a New Order

“You would never say it, but they are mutant seaweeds, like lianas, but bigger, that grow on the rocks. When they are cooked they remind you of the taste of Jerusalem artichoke mixed with scallops.”

Negotiate discreetly with him, in a corner of the long kitchen, which is separated from the dining room by means of a rectilinear large window, as if it were a token of absolute transparency. Find some room in the crazy crowd made up of about 15 busy people. You will recognise Rodolfo immediately. His hair is flattened and pulled backwards or with ringlets wilting on his forehead. His back is bowed and his gestures are meticulous. He stands in the middle of the room, his muscles contorted as he plates dishes. It is worse than a block of nerves. A marble slab. As always, he is full of concentration.

An image that reflects the total accuracy of his cuisine, which is physical like few others; though it has an uncommon concept. When, at the end of service, you look into his fatigued eyes, you feel all his faintness, the change from tension to relief, the temporary gratification of the constantly shifting goal. Rodolfo—Rudy to his friends—reminds me of Pierre Gagnaire when he was just starting his career.

Guzman is 35-years-old, but he is already at the helm of a great project. He does not want to turn BORAGó into the restaurant ‘par excellence’ in his city, but to do like his mates Alex Atala (D.O.M., S São Paulo) and Virgilio Martínez (Central, Lima): to promote and update the Latin American nouvelle vague. The slogan is: endemic cuisine. The cuisine at the end of the world, from the other side of the world. For Guzman, this means the contingency of a country with its incomparable fortune, that is still not very well known.

“Chile is ready, it opens out to the world’s cultures. But it is still ignorant of its deep mysteries, of the wild vegetation, of the many endemic cultures that survive, miles and miles away, without any sort of exchange of views, without any comparison.” He did not say it officially, we take full responsibility of what we say, but Rodolfo Guzman has been dreaming of a project, concerning the emergence of the nation: ‘The Minga Project’.

“Have you heard about Minga? They are our typical wood houses, built on wheels and allowing the residents to move away depending on the season. Such moves take place during a sort of collective party— the houses are dragged by oxen and horses, or placed on a boat—the whole community attends this event. It is our version of transhumance, an experiment of nomadism that we have in our blood. A symbol of mobility, of the interdisciplinary nature of our project that will connect all cultures, producers, chefs, scientists, anthropologists and researchers coming from the four corners of our country and from the neighbouring countries, in Lima at the end of 2014.

“From the torrid desert in the north to the Arctic wastelands in the south, Chile is a huge nation that is extremely varied. Between the sea and the mountain there is the desolate vastness of Patagonia. Too many food realities are unknown. For this reason I want the Minga Project to be a cultural festival, but also a great folk festival, a meeting of artists, foragers and growers, an intellectual gathering open to all Latin-American emerging cuisines.”

On the menu at BORAGó you can find primitive dishes, wild products, coming from selected micro-agricultures. The locavorism starts here. With sea fruits, called loco—a type of Jurassic clams belonging to the abalone species, a real local treasure for which the Chileans go ‘loco’ for. Besides the loco, you can try the Picorocos and the Cochayuyos salads. “I’m gonna show you tomorrow. We will go with Tommy and Sergio to pick them up on the Quintay coast. You would never say it but they are mutant seaweeds, like lianas, but bigger, that grow on the rocks. When they are cooked they remind you of the taste of Jerusalem artichoke mixed with scallops.” Delicious.

It is an introspective cuisine showing an intimate metamorphosis of nature. No wonder Guzman went to a good school. One of the best, in fact. At Andoni Aduriz’s, the Basque witch doctor of Restaurant Mugaritz. A couple of seasons on the frontline to combine experimentation and poetry, and the result will “distort your point of view of the world forever,” the young Chilean says. A combination of tradition and innovation. He transforms the Chupe, a vegetarian roast of mushrooms with fresh and dehydrated morels into an intense cream. A masterpiece? Of course, even if it has to share its honorific title with the Pichanga de Cordillère from 1,000 metres, a variation of pickles, the personal version of a Chilean folk dish revised with celery, fresh cheese with nettle ash and elm salt, a reddish powder extracted from the bark of the tree with the same name, and… parasites. “Parasites are simply some excrescences of fungus—the most natural thing on earth—they grow on the bark of trees. Like the berries in the wood,” Guzman says.

It is the strength of Guzman’s touch. An incessant, hidden work for the cultural sedimentations of Chilean traditions, but with an innate elegance, a sharp style, which is immediately recognisable. At number eight, Rudy has almost reached the ‘pole position’of Latin America’s 50 Best Restaurant Awards. Last September, Rodolfo Guzman was given an ovation in Chile and all over the world, like a pop hero. Time changes: who knowswhy 40 years ago another big Chilean reformist, a leader of the National Unity, reached less unanimous consent than our curly-haired chef of today. 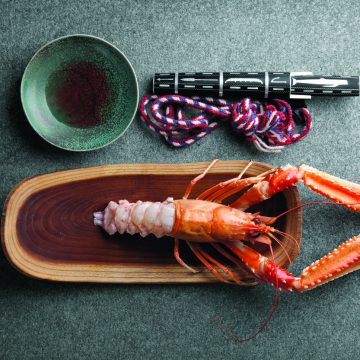 Rising from the ashes

Marc Veyrat is a defiant man on the rebound. Rebuilding his home, kitchen and restaurant after a devastating fire saw his dream turn to ashes earlier this year. Andrea Petrini meets the real hero of French-Alpine cuisine as featured in FOUR International edition.