Wojciech Modest Amaro became a legend in his home country overnight. Kasia Sova travels to Poland to meet the chef in his Atelier and to sample Moments from his menu

There is an uplifting yet subtle aura of celebration in the restaurant when I arrive at Atelier Amaro, in Warsaw. My interview is interrupted twice: first by a leading Polish politician who comes over to praise the chef and a second time by a team of TV journalists who choose Atelier Amaro as their hang out for lunch—they want to congratulate the chef on his achievements. “It’s never ending,” says Wojciech, with a broad smile. “It happens over and over again.”

There’s no wonder—I visit Wojciech barely a week after he received his first Michelin star. What makes it more significant is that this is also the first Michelin star awarded in Poland, unleashing a media frenzy. When I ask him if he feels like a celebrity, Wojciech jokes: “No, I’m a real star. I have a certificate to prove it!”

The mischievous smile and enthusiasm can’t hide the fact that the softly spoken Wojciech Modest Amaro looks tired—tired but comfortable, in an elusive, almost unreachable way that only content and fulfilled people can pull off when they know they’ve worked incredibly hard for their dreams to come true. Wojciech is clearly enjoying his moment in culinary history.

Appropriately, the dishes on his menu are also called ‘Moments’, offering no more than hints on a card to enhance my appetite; a list of Polish ingredients—some of them only vaguely familiar to me. I am about to eat dishes including the ‘Trout/Smoke/Leek’ and ‘Sweetbread/Juniper/Horseradish’, among others. When the food arrives I begin to recognise some of the aromas and flavours. However, they are presented in distinguished forms, textures and arrangements. Wojciech explains: “I want to touch people’s emotions—I want them to recall the smells and tastes from their deepest subliminal memory, but I also want to create a new reminiscence. An artist produces a piece that lasts centuries, communicating with people’s feelings. Food is so transitive—I have to create my pieces over and over again, for each individual. I am always challenged to craft that special moment on the plate.”

Despite Wojciech being drawn to the kitchen from an early age, his choice of school was determined by the bleak years of communism in Poland. Gastronomic options were as sad as overcooked cabbage; shops could offer little more than milk, bread, margarine and mustard, so his father encouraged him to study electronics. “Subconsciously I was still searching for creativity in my life and I didn’t enjoy the technical subjects. I wanted to study painting at the Academy of Fine Arts, but chose Political Studies in the end.”

In 1993, Wojciech found himself in London to improve his English, but he was hungry for a different kind of knowledge. “My first experience of the buzz of a restaurant kitchen in London was a revelation. The smells, sounds, movements—I was totally enlightened by the whole experience.Once I entered, I knew I would never leave.”

Unshakeable confidence and honesty prompted Wojciech to breeze straight into the famous San Lorenzo in Knightsbridge, Princess Diana’s favourite and a popular hangout among A-listers of the 1990s. “I just walked into the kitchen and told the head chef I had cooking in my heart. I was employed on the spot!”

After San Lorenzo, Wojciech worked in many of London’s top restaurants, but he didn’t waste his time where he wasn’t suited. “I would get hired, enter the kitchen, then leave if it wasn’t the place for me. It did seem arrogant coming from a young man without a work permit, but I didn’t want to work somewhere I couldn’t learn anything.”

Wojciech’s method paid off when he got a job at St Quentin and later Scott’s under Nigel Davis, former head chef at The Ivy. “It was huge. My madness in search of a mentor and the perfect environment had reached its climax. Nigel created a new chef out of me—he saw this chaotic, passionate, frantic young man and taught me the basics: I learned how to manage teams, how to run the restaurant and why a coordinated kitchen works so much smoother.”

Wojciech explains: “Until this point, my only concern was the food on the plate.” The learning curve continued as the young chef practised his craft with Christian Delteil, Richard Corrigan, Simon Shaw, Aiden Byrne and Angela Hartnett, to name just a few.

With Wojciech’s experience growing, so did the interest in the chef from back home in Poland, particularly from Jan Wejchert a well-known businessman and media mogul, with a huge passion for food.

In 2003, Wojciech began cooking for the members of the Polish Business Roundtable Club in Warsaw, led by Wejchert. Together, they created Amber Room, which opened its doors to the public in 2009, shortly before Wejchert’s death, on 31 October 2009, at the age of 59.

Having been named by the International Academy of Gastronomy as Chef de l’Avenir, in 2008, Wojciech wrote his first cookbook, Polish Cuisine of the 21st Century, which focuses on deconstructing traditional Polish dishes. The book became an instant bestseller and achieved the Grand Prix Littérature de la Gastronomique in 2010. It also opened the doors to elBulli, where Wojciech practised alongside Ferran Adrià, and René Redzepi’s Noma, with whom the Polish chef remains good friends. Wejchert’s death, just a month after the Amber Room inauguration, shattered the grand plans Wojciech held for the venue and he realised it was time to start thinking about finding his own place on the culinary map.

The ideas and theme of what Wojciech wanted for his restaurant had been brewing for some time. The ‘Nature Meets Science’ motto seemed a logical progression, given the wealth of Polish produce, proper seasons and deep gastronomic tradition before the blackout of the communistic era. It was, however, harder to accomplish than he had anticipated.

Wojciech spent 16 months and 60,000km driving the length and breadth of Poland to find the best ingredients. “Some of the farmers and producers I approached didn’t even realise what treasures they were cultivating or breeding. They thought I was mad with my enthusiasm for forgotten fruits, edible flowers, overlooked fish, disregarded mushrooms and strange names for what they considered to be weeds cluttering up their garden.

Those who did understand the potential of their produce thought I was crazy because of the way I wanted to cook and transform their harvest.”

Once again, inspired by the culinary wealth of his country, Wojciech wrote a second cookbook. In the beautiful Nature of Polish Cuisine he presents a catalogue of produce generated by Polish habitats together with brilliant recipes. The praise from the gastronomic world followed suit: the book took forth place at the Gourmand World Cookbook Awards in 2011. “It was a dream come true—the only part lacking in my mission to introduce modern Polish cuisine to the public was to open my own restaurant.”

After several failed attempts to open the right venue, Wojciech spotted an unassuming building on the edge of the picturesque Agrykola Park in the centre of Warsaw. “My heart started beating faster. I knew straight away it was perfect. It had everything I could ask for—a central location, yet in the middle of the park—the trees, the birds, the flowers and the landscape surrounding us creating the illusion of dining in the middle of a forest.”

Atelier Amaro is so peaceful it is hard to believe we are in the bustling Polish capital. The restaurant is bright and airy with a subtle and simplydesigned interior, inviting nature to be the lead act of the show. Staff keep the restaurant’s doors open in the summer to allow the outdoors in—the sound of rustling old oaks, the smell of grass and flowers—a symbol of Wojciech’s mission.

I later discover that the restaurant kitchen is not the only place where nature meets science. There is The Lab, where staff are encouraged to experiment and guests of a curious persuasion are also welcome. Moreover, 100km away, Wojciech runs a farm, where locals are employed to care for guinea fowls, quails, pigeons, pigs and lambs and to help pick acacia petals, chestnut blossoms or sweet flags; green strawberries, dogberries and salsifies.

The diversity of produce on the farm is enormous. Quite simply, it has to be to successfully cater for the restaurant’s menu and focus on seasonality.

“At some point I realised that dividing my cooking according to four seasons is not good enough. Poland is very rich in wonderful produce, but some of it passes as soon as it arrives or appears sooner or later than expected. Hence, I created Calendar of Nature—dividing my cooking into 52 weeks so the menu can change weekly, too.”

Each dish is created compliant with one of the “Spirits”.Spirit of Time means that all ingredients on a plate come from just one week; Spirit of Place—where the food not only comes from one week but also only one of Poland’s natural habitats: a forest, the Baltic sea, a meadow, a farm, a river, a lake, field or mountains. The third form in his calendar, Spirit of Tradition, helps create dishes when nature is asleep—these dishes are composed from ingredients that have been smoked, dried, salted, fermented, pickled or even burned.

When posed with my question of whether he felt pressure when opening Atelier Amaro, Wojciech makes a firm denial. However, only three months later—after the Michelin Guide announced he had won the Michelin Rising Star award, in 2012, he began to feel the heat.

“The pressure was immense. I had been doing my job the best I could, but so many people had their hopes so high and I didn’t want to fail them. It was pure happiness and exhilaration when we found out we were awarded the Michelin star several months later but above all, it was a huge relief.”

Wojciech believes that once the mind is relieved from this enormous stress, it is capable of generating even more. But he is not going to define what it is or name new goals. “All I wanted to do is to get this important, historic Michelin star, and now I want to focus on my work in The Lab, on educating young chefs and perfecting new ideas.”

He concludes: “It is an award in itself to come to the kitchen in the morning and see the brilliant smiles on my team’s faces and my satisfied guests. If I have led the way for new amazing chefs in Poland, the goal has been reached. If another Michelin star happens, it would be fantastic, but there won’t be any more star gazing.” 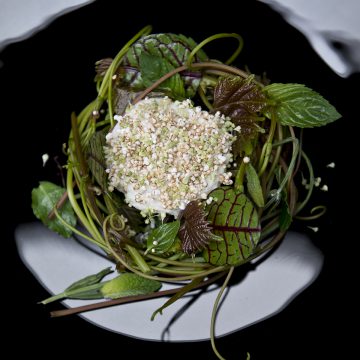 The educational Polish food lab, Food Think Tank, has announced its 5th and biggest project to date. With a vision to create a modern version of a forest in the very heart of a city, plus fine dining to compliment, they have created a crowd funding project to make this epic gastronomic dream a reality.

Start off your week with a tasteful treat by Chef Jack Fedde, as he shares with FOUR his recipe for ‘Pigeon Royale”…

On Wednesday 3 September, 2-3pm (BST) Michelin-starred chef Modest Amaro will be taking over @FOURMAGAZINE’s Twitter account to answer all your culinary questions…