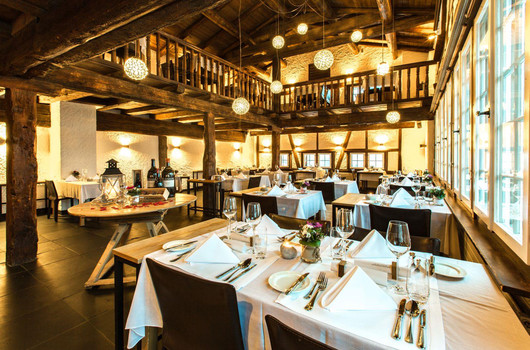 From cheese fondues to giant slices of cream cake…

The Arosa Lenzerheide ski resort offers a guarantee of snow and is impressive by virtue of its 225 kilometers of prepared slopes at altitudes of up to 2,865 meters above sea level. Wide slopes that allow for large radius sweeping turns and steep slopes to cut your edges on make the hearts of winter sports enthusiasts leap for joy. The Swiss winter sports paradise is not only known for its excellent slope quality, however. No fewer than 36 mountain lodges and restaurants throughout the ski region treat their guests to a range of culinary delights. Modern self-service restaurants, rustic alpine huts, and chic gourmet restaurants offer something for every palate.

The dishes are as versatile as the restaurants themselves. At the “Alp Fops” host Gian Malär serves exclusively local delicacies: barley soup, Swiss Mac ‘n Cheese, and traditional cheese fondue – with cheese made from the milk from his own cows, of course. The rustic lodge was built in 1886, has since been owned by the Malär family, and befits the stereotype of a Swiss alp like no other. At Gian’s you won’t need a menu. Instead, he likes to recount stories about life in the Alps, the Lenzerheide region, or the famous “A bell for Ursli.”

Boasting more international flair but no less cozy is the Motta hut. As early as their first winter, the siblings Bianca and Sergio Andreatta made it on the “Gault Millau” list of the best Swiss restaurants. The eclectic menu features dishes such as homemade Taglierini with prawns, Salsiccia luganighetta (Italian sausage) with tasty Ticino polenta, and crispy poussin. It is rare for anyone to leave the cozy sun terrace with its fur-lined loungers without first indulging in some delectable dessert. Tiramisù, Nonna’s chocolate muffins, and the giant slices of cream cake have a magnetic effect.

A wind of change is blowing at the Hörnli hut in Arosa as well, where the Urden cable car connects the Arosa and Lenzerheide ski resorts. One year ago, Hitsch Leu took over the lease of the Arosa Ski Club hut. Since then, a white, a blue, and a yellow flag can be found hoisted alongside the traditional Swiss flag and they are not just decoration. The flags indicate whether the homemade lasagna (white), the crispy spare ribs (blue), or the grilled chicken (yellow) are still available.

The Weisshorngipfel restaurant offers spectacular interior and exterior views. The modern summit restaurant features 360° windows, affording a panoramic view of a breathtaking mountain scenery. Delicacies from the in-house, open-view summit bakery are the highlights of the menu. Whether little pastries, cream cake, or the original Grisons nut pastry: at 2,653 meters above sea level the summit bakery team literally indulges its guests at the highest level and doesn’t mind being observed at work thanks to the open bakery layout.

However, even down in the valley, the winter paradise Arosa Lenzerheide leaves nothing to be desired when it comes to culinary delights: at the “Fastatsch” restaurant, operated by the Valbella Inn Resort, guests can enjoy a juicy piece of meat from the wood grill. In the gourmet kitchen at the “Maiensässhotel Guarda Val” Thomas Walz, Swiss Hotel Chef of the Year in 2014, re-interprets traditional Grisons specialties. The “Carn & Caschiel” restaurant offers a touch of nostalgia mixed with modern design and an exclusive cheese fondue selection.