The three-day festival saw headline music acts from Björk, Ben Howard and George Clinton. Plenty of other Indie-Folk-Rock music that played until the stars came out.

The culinary line up was what obviously caught our attention and we were excited to see the chefs who were getting involved and stepping outside their comfort zone and working in festival/camp site conditions. This year’s hosts included and , who did a tremendous job hosting long banquet tables of guests. They were joined by , , Neil Borthwick, Moro, Duck and Waffle, Kurobuta amoung others.

We enjoyed attending Scott Hallsworth’s ‘Japanese Comfort Food’ cooking class where we all gathered around a rustic banquet table and enjoyed getting involved, picking up some new Japanese cooking skills and having a laugh with friends.

Due to the nature of the festival, it attracts a very British, middle class audience who are after a fun, relaxing weekend with family and friends. There is no pretence and it is a very relaxed environment. It is also kid friendly and is made to be a fabulous family outing.

The award-winning festival (BestFestivalActivityAward,2013) has been running for five years now, so all the creases have been ironed out, allowing the festival to run smoothly like a well-oiled machine. The programme offers a detailed schedule, so you can plan your day around who and what you want to do. The team behind Lovebox and Secret Garden Party are the curators of the festival so it is in very good hands.

Wilderness was a great experience and something I would recommend keeping an eye out for next year.

Find out more about the chefs here…

Hospitality Action | It could happen to you

With a brand new campaign out that features some of the UK’s best chefs, HA highlights the great ways in which the charity works to help people in the hospitality industry.

Foodies know their festivals, and Wilderness Festival in the beautiful Oxfordshire countryside is not one to miss, running from 6th – 9th August. This year, Niklas Ekstedt and his Nordic cuisine are joining Angela Hartnett and Nuno Mendes at The Chef’s Table… 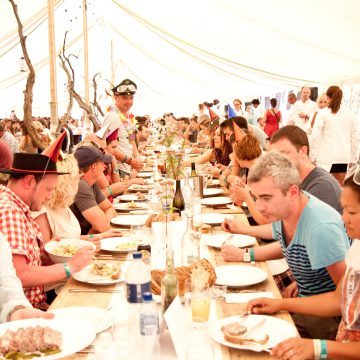