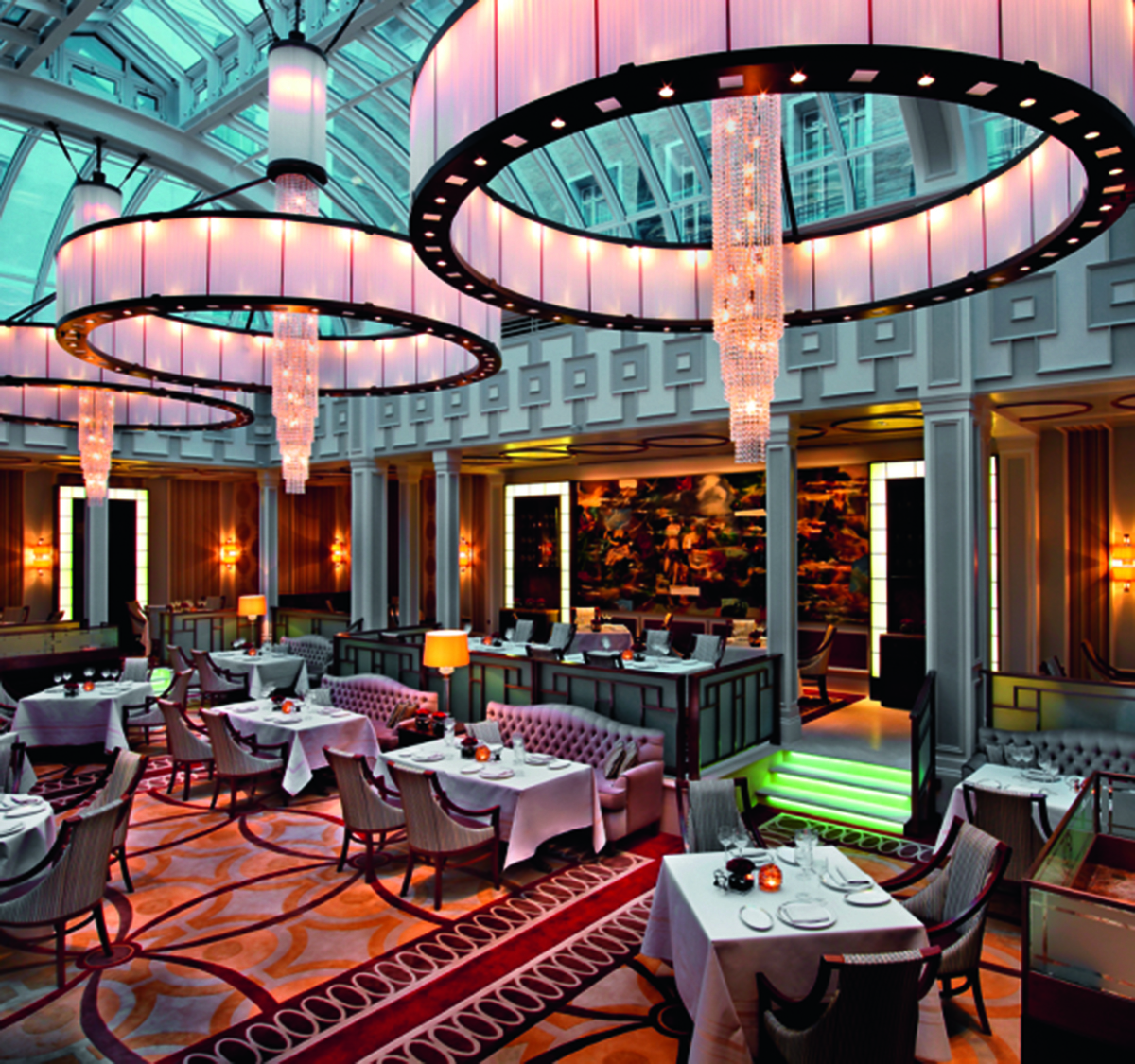 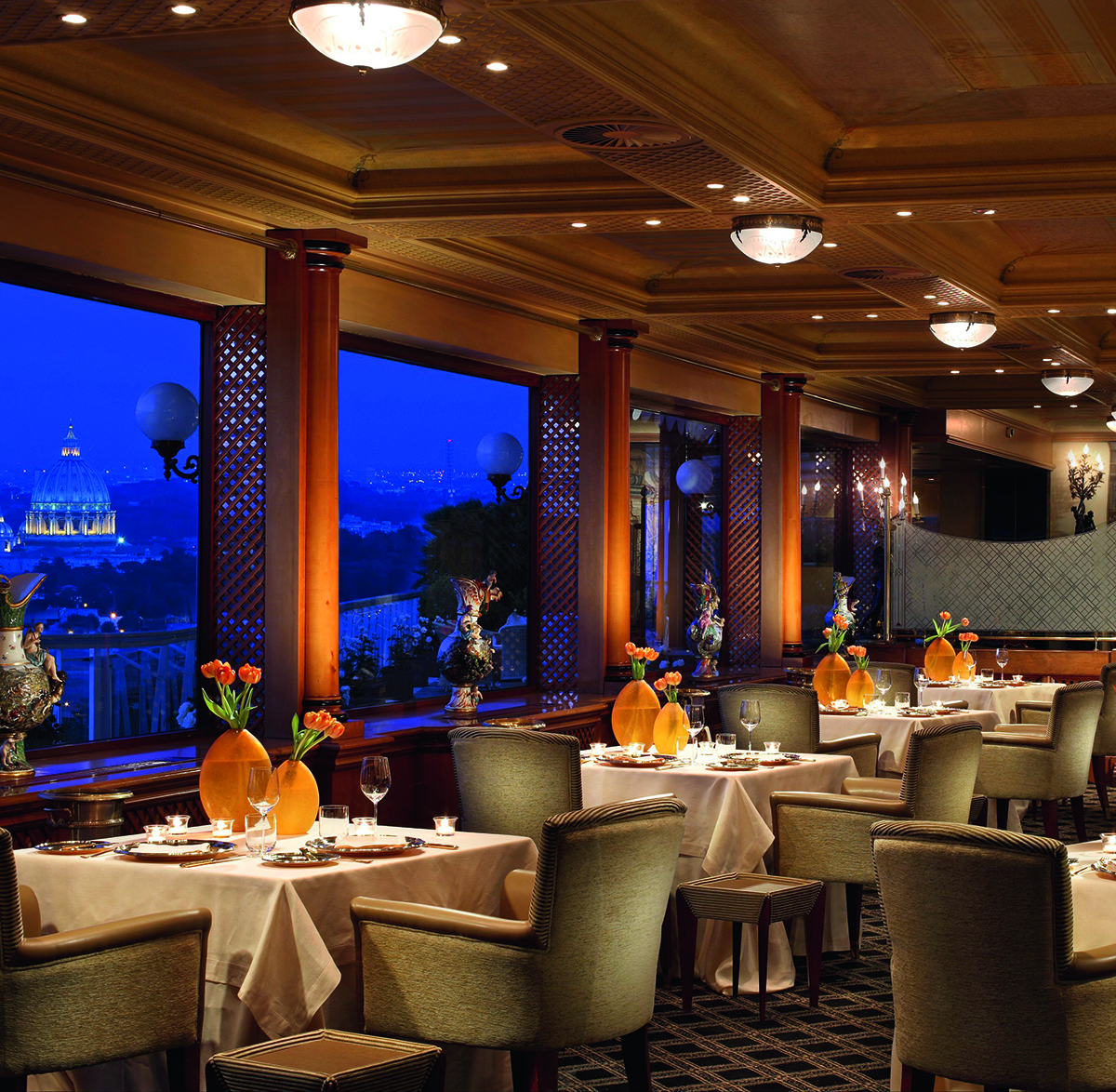 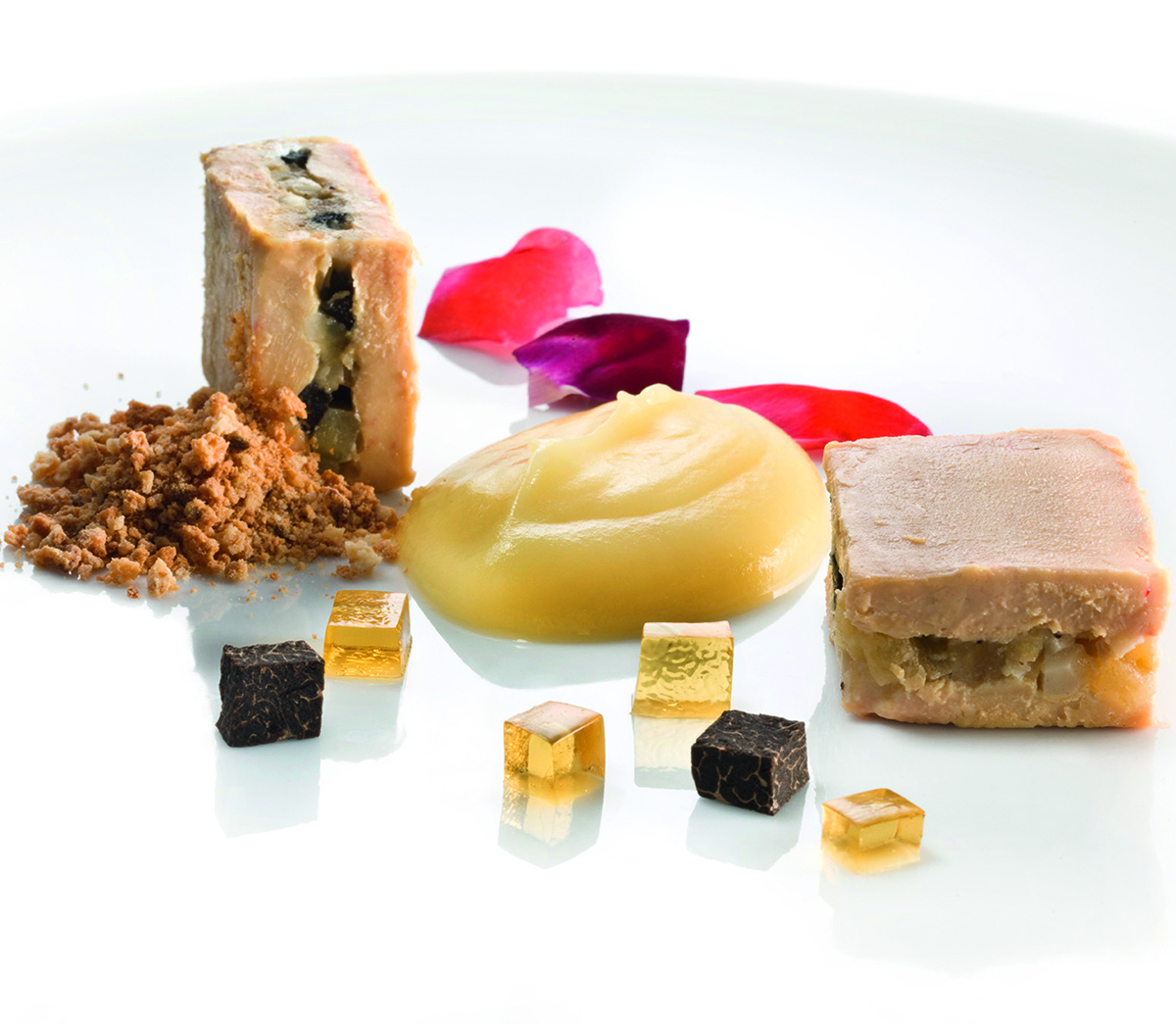 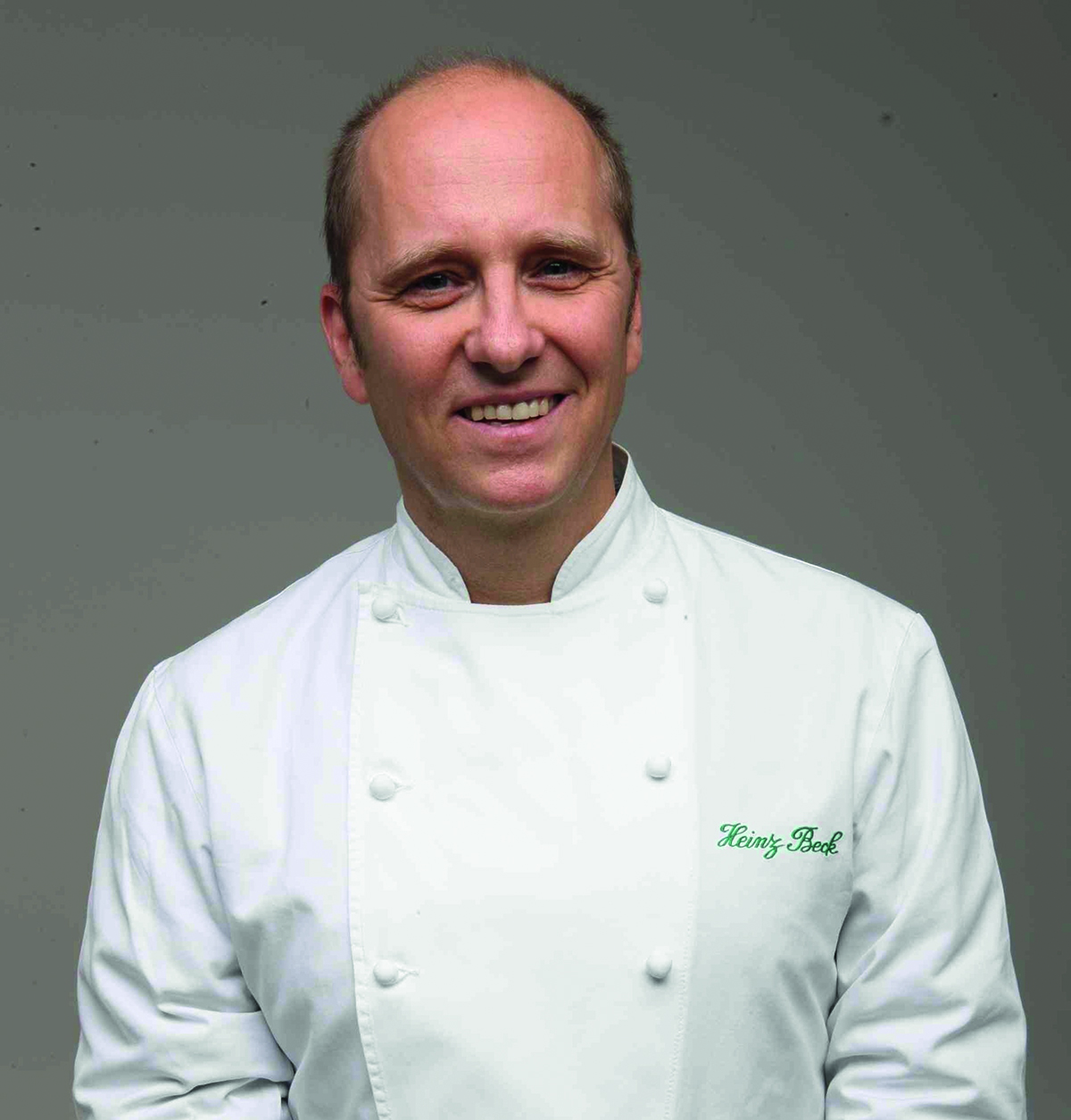 With restaurants scattered around Europe, Heinz Beck is the Bavarian chef who has conquered Rome and is now on a mission to make gastronomy healthy, as seen in FOUR’s International Edition…

“Each dish is a challenge that I face with passion and enthusiasm. The most difficult part is to create emotions in full respect of health.”

Considered one of the most famous exponents of the world of haute cuisine, Heinz Beck is the genius chef famed for his Mediterranean cuisine.

Born in Germany in 1963, Heinz Beck gained his professional culinary qualifications in Bavaria before starting out in one of Europe’s top restaurants, Munich’s three Michelin star Tantris restaurant.onsidered one of the most famous exponents of the world of haute cuisine, Heinz Beck is the genius chef famed for his Mediterranean cuisine.

Beck’s ambitious nature soon led him to join Heinz Winkler, the Italian-German chef, as a sous chef, helping him to launch Residenz Heinz Winkler in Aschau, Bavaria. Winkler, who in 1981 was the youngest ever chef to receive three Michelin stars, at the age of 32, has been a big influence in Beck’s career.

The Eternal City soon came calling for Heinz and it wasn’t long before he found himself in Rome. His first job in Rome was at La Pergola, located within the city’s magnificent Hotel Cavalieri, perched above the city.

Beck spent ten years working his way up to the position of executive chef at La Pergola, having been with the restaurant since 1994. During this time, his position as an important member of the cultural and culinary community of Rome was cemented when in 2000 he was presented with the Gold Medal of the Foyer of Artists Award, an International Award from La Sapienza University of Rome – the first time the award was presented to a chef.

In 2009 the lure of London proved too much and Beck opened Apsleys at The Lanesborough Hotel. The restaurant picked up a Michelin star in 2010. Apsleys, the first restaurant outside of Italy created by Heinz Beck, joined an impressive portfolio of restaurants, which also includes Heinz Beck Seasons at Ristorante Castello di Fighine, Siena; Café Les Paillotes, Pescara and La Pergola, Rome.

Beck is active in all of his kitchens, although spends the majority of his time in Rome. Apsleys is overseen by Beck, with the chef travelling regularly to London to meet with his brigade.

The executive chef at Apsleys is Heros De Agostinis, who started his career with an internship at La Pergola in 1995. After stints working for some of the world’s most impressive chefs, including three Michelin starred Heinz Winkler and Marc Veyrat, as well as running the kitchens at Hotel Kempinski in both Indonesia and Italy, Agostinis returned to La Pergola in 2009 and has spent the last three years as Beck’s right hand man.

Beck and Agostinis have created a menu at Apsleys that focuses on light Mediterranean-inspired dishes. The menu is traditionally Italian, with signature dishes including: seabass cannolo with celery and melon; black cod with chickpeas; slow braised veal cheek with apple purée and Jerusalem artichokes and carbonara fagotelli.

The wine list at Apsleys has enormous depth and includes some of the rarest vintages in the world, while the creativity and luxury of the menu work in harmony with the grandeur of The Lanesborough hotel.

Apsleys’ Venetian-style dining room, with its glass roof and plush upholstery, is arguably one of London’s most beautiful dining spaces. Designer Adam Tihany was enlisted to transform The Lanesborough’s grand dining room, resulting in a handsome, restrained Art Deco interior featuring breathtaking chandeliers. The company has been responsible for the design of some of the world’s most famous restaurants including Le Cirque, Jean-Georges and Per Se in New York.

Heinz’s interpretation of modern cuisine includes careful attention to the ingredients at hand and understanding how their flavours can transform. His profound understanding of gastronomy, particularly that of Mediterranean, has earned him global praise and a career besieged with awards.

Heinz is currently championing lighter, healthier dishes with his cookbook Ipertensione e Alimentazione (Hypertension and Nutrition). “Currently I’m collaborating in the writing of an interesting book on children’s obesity, it’s an issue that is undervalued very often.” Heinz explains: “Each dish is a challenge that I face with passion and enthusiasm. The most difficult part is to create emotions in full respect of health.” For Heinz, Mediterranean cuisine means “balance, harmony, and lightness,” keen to stress that a love of food, doesn’t have to come at the risk of your health.

In addition to tackling childhood obesity, Heinz has just launched his first restaurant in Portugal. Opened in October 2012 at the Conrad Algarve, Gusto by Heinz Beck fuels Beck’s relationship with the Hilton Hotel group. His latest restaurant will offer a fusion of contemporary Mediterranean cuisine with a Scandinavian-inspired design inside the restaurant.

The Nordic influence comes from Conrad Hilton’s father, Augustus, known as Gus, who was born in Norway, inspiring the Nordic-design and the name – Gusto. Heinz says of his latest Hilton collaboration: “Conrad Hotels & Resorts is famed for its flawless service and personalised approach. I look forward to building on this by bringing an original culinary experience to Conrad Algarve to be enjoyed by guests from across the world as well as local Algarve residents. Gusto will help define this new hotel’s reputation as a culinary leader.”

Heinz will be responsible for the concept and seasonality of the menu, which will feature delicacies from land and sea.

The restaurant is located in the stylish Quinta do Lago area of the Algarve. The resort is built in the style of an 18th century palace, with 154 guest rooms and suites designed by interior designer Miguel Cancio Martins.

In addition to the dishes the restaurant also offers an extensive wine list, cooking classes and a ‘Gus-to-Go’ range, an adjoining bar showcases innovative mixology, an exclusive Cuban cigar menu and an additional bar menu.

Heinz’s restaurants attract some of the world’s most famous politicians, royalty and Hollywood stars. Heinz even counts the First Lady, Michelle Obama, as a fan. “She loves the Fagottelli alla carbonara,” he says.

One of Beck’s favourite dishes comes from La Pergola, undoubtedly Rome’s finest restaurant. “If I had to choose one [dish] it would be like asking a father who is his favourite son.” Although he finishes: “I’d definitely say the battered courgette flowers with consommé of shellfish and saffron, which is also the image on the cover of one of my books.” He explains: “Every dish comes from an ever-changing idea and it transforms in a mixture of shapes, colours and flavours.

The weekend has never looked so good with this sensational recipe from Chef Heinz Beck, for duck ham and watermelon with foie gras gems…Delicious!

Top chef Heinz Beck shows us his recipe for veal tenderloin with dried fruits and gratinated pistachio, as featured in our Middle East edition…Yum!

FOUR looks at the latest in luxury bathrooms from sleek German designers, Knief…