“Onions, garlic, potatoes and salt are the basis for a great meal”, says Mark Poynton of Alimentum in Cambridge.

Mark Poynton is one of the UK’s leading chefs and is Chef Patron of the award-winning Alimentum restaurant in Cambridge. Within a year of arriving at Alimentum andtaking the head chef position, the restaurantgained three AA rosettes. Two of Mark’s regular customers were so impressed withhis cooking that they invested in thebusiness and he took over Alimentum in2010, becoming Chef-Patron. In 2011 and2012 the restaurant was named one of the ‘Top 100 UK Restaurants’ in the National Restaurant Awards and in October 2012 was awardedits first Michelin star in the 2013 guide, which it has retained for a consecutive year. Mark wasshortlisted for The Craft Guild of Chefs ‘Restaurant Chef of the Year’ award 2013.
In July 2014, Alimentum was voted number 10 in Square Meal Lifestyle’s Top 50 restaurants outside London. Mark entered the world of hospitality at the tender age of 15 when a friend’s mother got him ajob as a part time waiter at the Queen Hotel in Chester. During his time there he becamefascinated by the workings of the kitchen. After just six months as a waiter he persuaded thehotel’s executive chef, Ian McDowall, that he was serious about cooking and his career behind18 months with Paul Kitching at the Michelin-starred Juniper restaurant in Altrincham followedbefore Mark made a career-defining move by joining Daniel Clifford at Cambridge’s twoMichelin-starred Midsummer House. During his seven year tenure, Mark worked his way up from chef de partie to head chef, during which time the restaurant gained two Michelin stars,four AA rosettes, and 7/10 in the Good Food Guide.

So Mark, when and where were you born? Where did you grow up? What was it like?

I was born in Chester on 10/12/1980 and grew up on a council estate called The Lache, which was great fun with a strong community feel. There were no mobile phones or PlayStations etc. so I used to spend a lot of time outdoors having fun with my two older brothers and friends.

Do you have any favourite stories from your work life?

Not stories as such but certain moments I hold fondly, like when I found out that I got a Michelin star at Alimentum. Paul Foster and myself had fallen asleep following a big charity dinner at Nutters restaurant, before Chef Andrew Nutter woke us at 6am, in his Union Jack boxer shorts, shouting at the top of his voice announcing we’d received our first Michelin star!

What are you most excited about on the menu right now?

I’m really excited about a new dish I’m working on of Cod and Onions. This sounds quite simple, but it’s very complex in the cooking and presentation as well as being full of flavour.

Describe a normal working day from start to finish.

A normal working day starts with me checking in with my number two, Richard, that everything is going to plan for the day and that suppliers and staff are behaving themselves! I will then have the same chat with my office manager Caitlin and FOH team. That will then leave me with enough time to check through emails and work on new dishes and ingredients before lunch service, which starts at 12 and generally finishes around 3pm.

Following lunch service I will chat to suppliers about what’s new and required ingredients for new menus, and it is at this point I usually talk with my head sommelier, Maxwell. We discuss what’s happening on the wine front as well as viewing, smelling and tasting any potential new wines that may perfectly pair with dishes on the menu and any new dishes.

Just before dinner service I will cook any new dishes for the restaurant team to try along with the wines that Max has suggested for them. Then at 6pm, we begin dinner service, which usually goes on until midnight before I head home to my fiancée for a well deserved glass of wine or beer and sleep.

What ingredients can never miss in the kitchen/pantry?

Onions/garlic/potatoes and salt because those ingredientsare a meal in themselves but when added to others, anything can happen.

What do enjoy cooking on your day off?

On my day off I like to cook comfort food, such as roasts, pasta bakes and suet pudding. 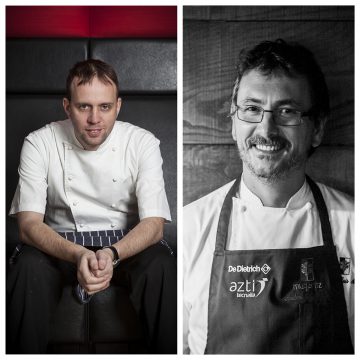 Avant-Garde! Battle of the Chefs

This week, two Michelin-starred chefs battle it out over FOUR questions to find out which is more avant-garde | Presenting Andoni Luis Aduriz v. Mark Poynton…