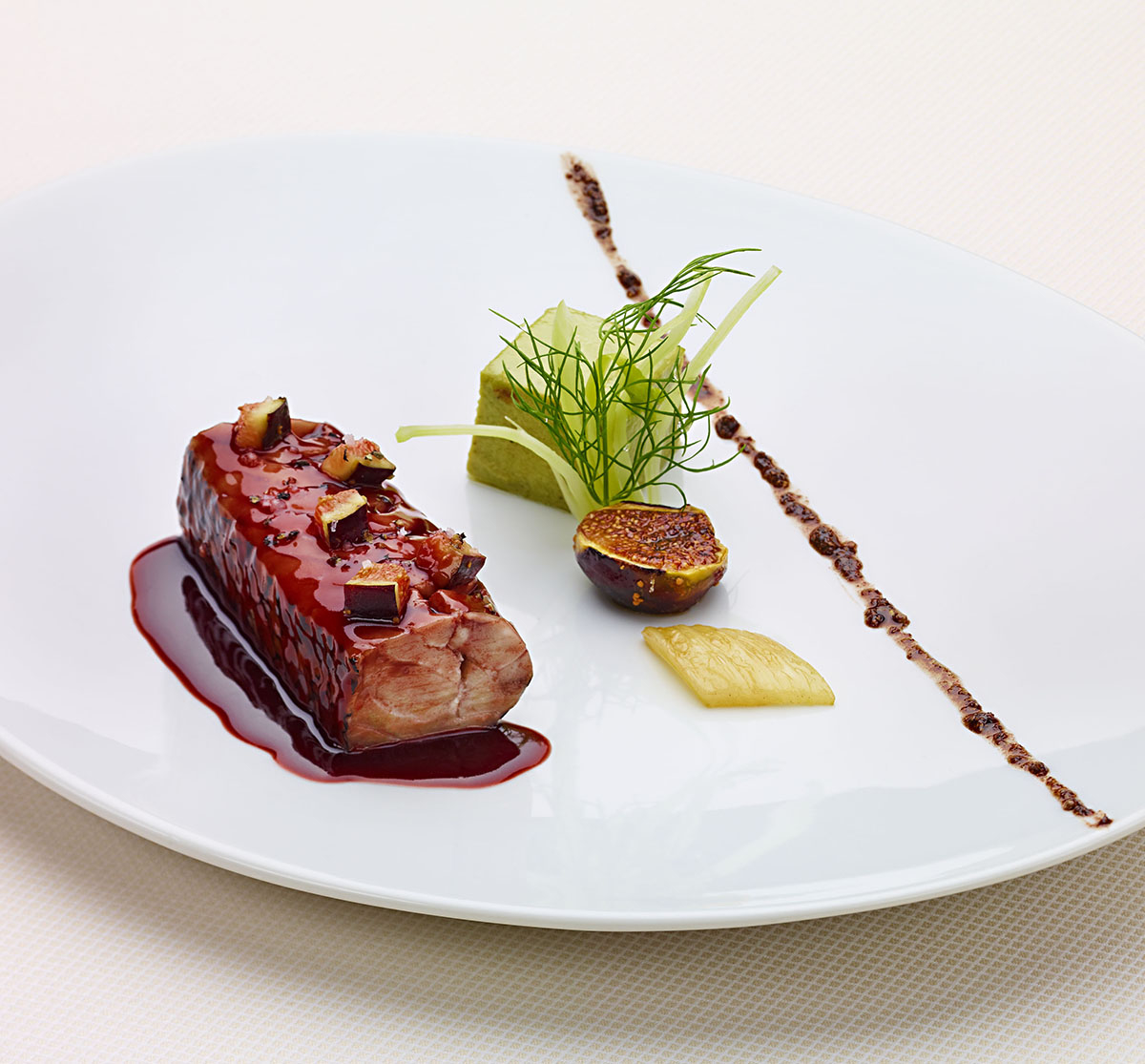 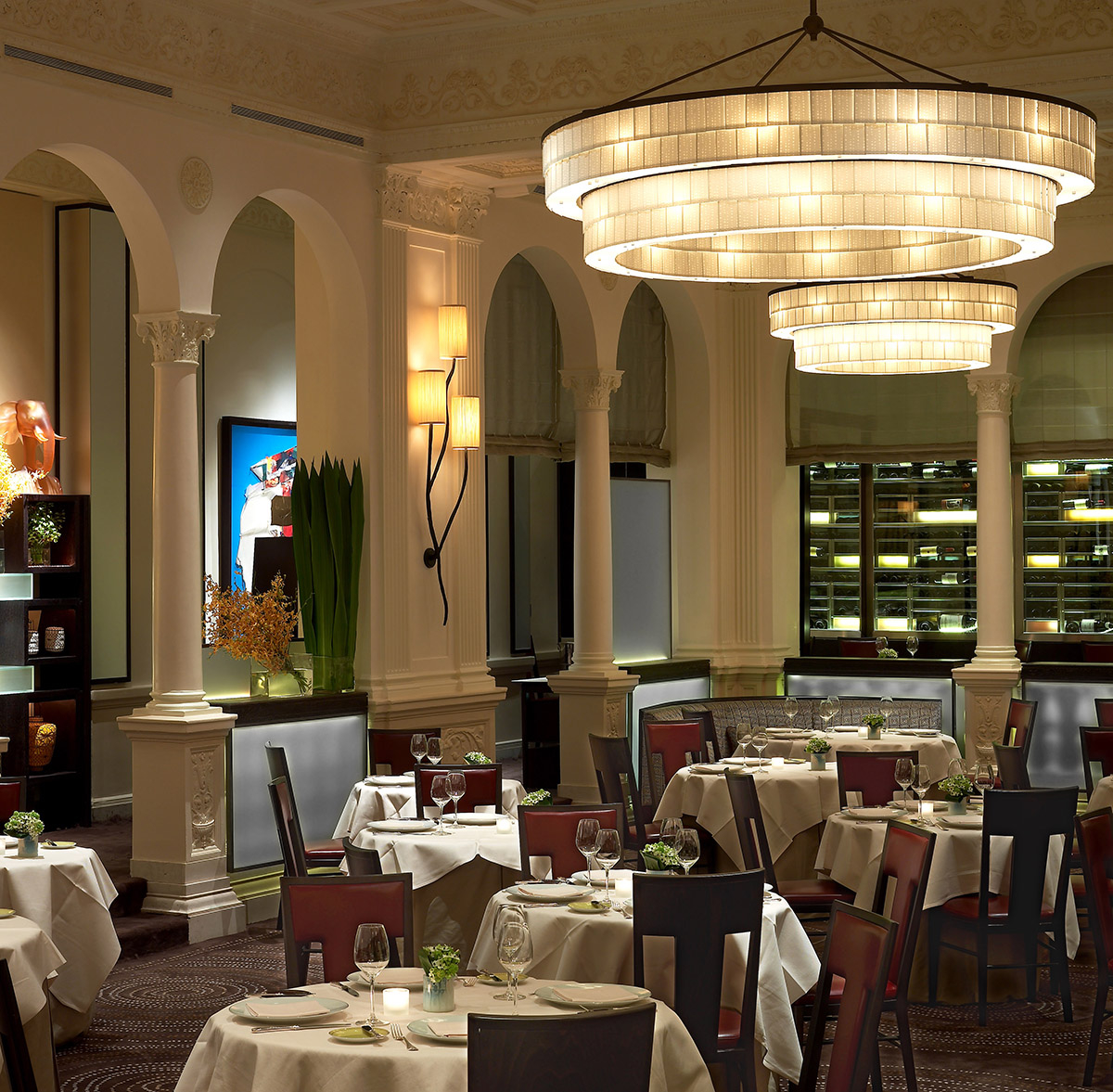 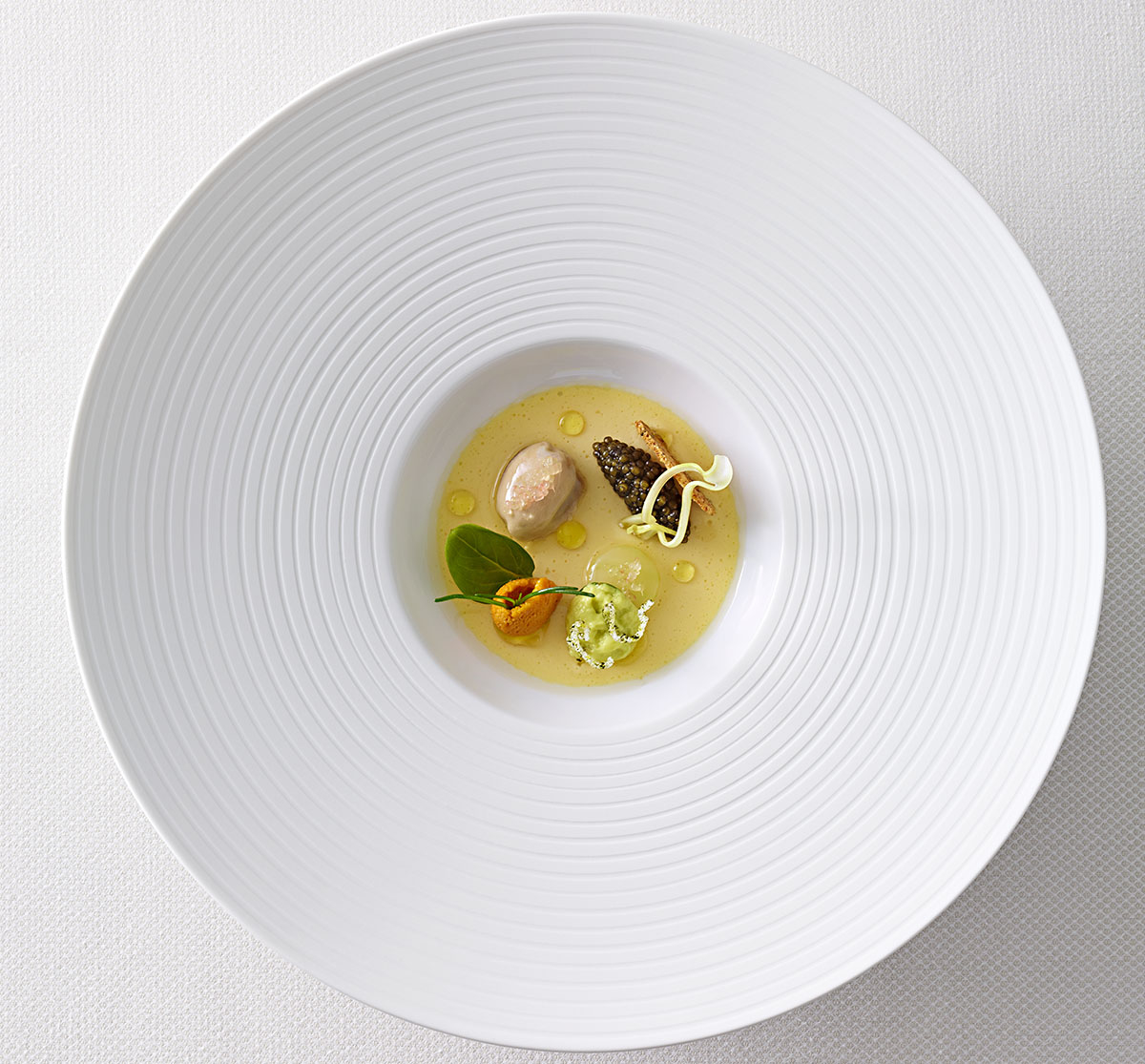 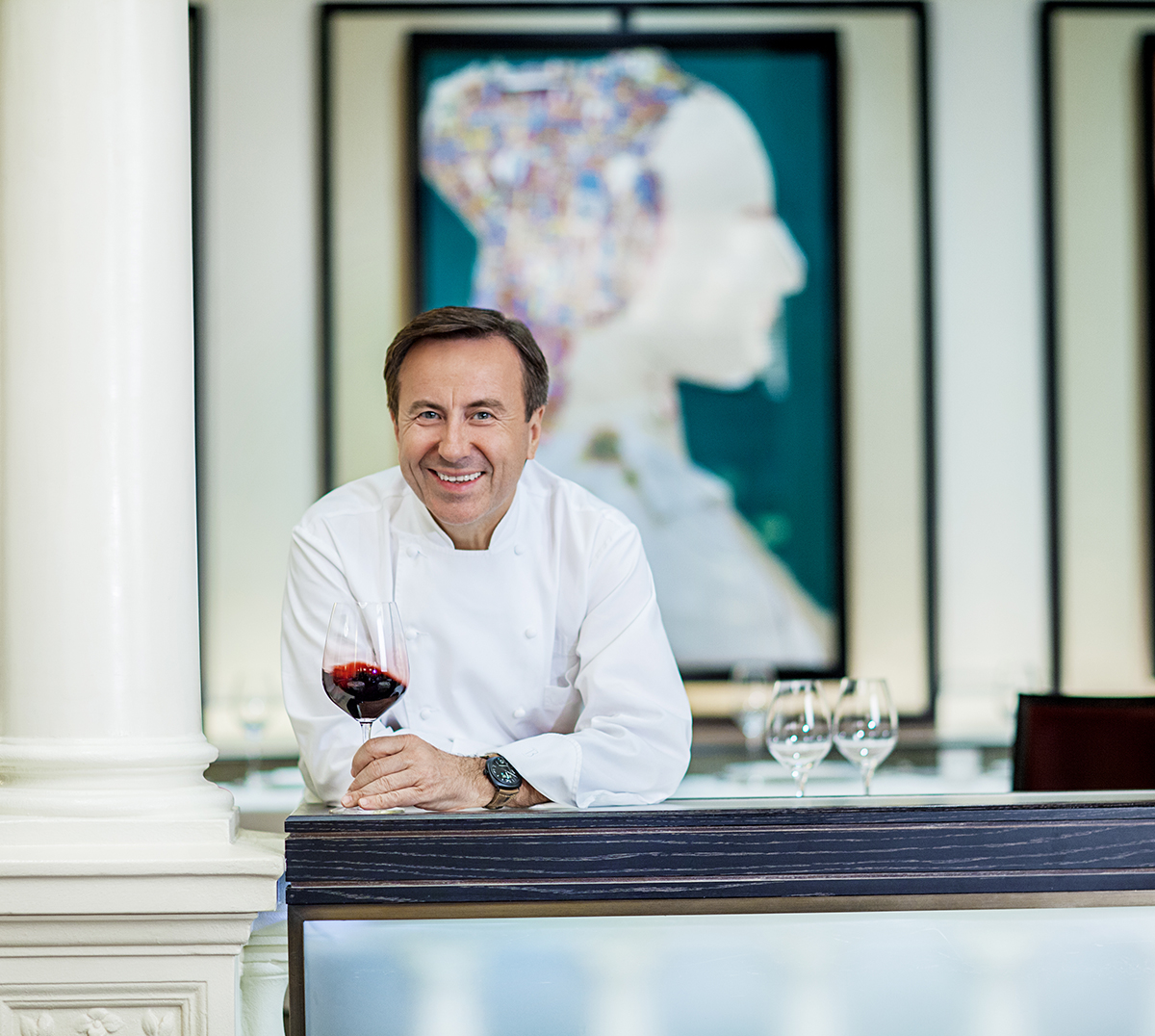 Daniel Boulud is not only one of New York’s greatest culinary achievers, but with accolades such as No.40 in the coveted World’s 50 Best; he’s also recognised globally as a leader in the art of gastronomy, writes Kerry Spencer…

“I wanted to be the new generation of French restaurantswhen I first arrived in New York and that meant keepingone eye on tradition and one eye on evolution.”

Sitting down to interview Daniel Boulud at his London restaurant, Bar Boulud, at the Mandarin Oriental hotel, I’m instantly at ease. Daniel is warm. A man with a big heart and passion for, not just gastronomy, but people, too. He’s currently in London to meet with fellow chefs, share ideas and celebrate the best of the best at The World’s 50 Best Restaurants awards—which, notably, he’s been recognised this year at number 40 on the list. However coveted, it’s not considered to be his greatest culinary achievement. It’s the three Michelin stars he holds at restaurant DANIEL—one of seven in New York City to be recognised with three stars—that Daniel Boulud is most proud of. “I’m very proud of this achievement,” he says, “To be at this level in New York City, with so many restaurants and talented chefs around, it’s wonderful. But before even Michelin came [to visit the restaurant], we already had four stars from the New York Times.”

A wonderful example of Daniel’s ability to both delight and surprise his guests is the dish Florida frog legs fricassee—fusing French dishes and techniques with the very best of American ingredients. Daniel was a trailblazing chef when he first arrived in New York and paved the way for many others, including Eric Ripert and Jean-Georges Vongerichten, to follow in his French-American style of cuisine. “I’ve done wonderful things in these last twenty years in New York, not just with DANIEL, but my other restaurants, too,” he says.

It is his flagship restaurant in the Upper East Side, where Daniel spends most of his time. “DANIEL celebrates its 20th anniversary this year and it remains where I live—above the restaurant. It’s where I spend my days when I’m in New York. Although DANIEL is only open at night and closed Sundays, so that gives me the chance to visit my other restaurants.”

Daniel understood from a young age that the key to a successful career as a chef would involve a fine balance—that of harmonising tradition with evolution. He says: “I wanted to be the new generation of French restaurants when I first arrived in New York and that meant keeping one eye on tradition and one eye on evolution.”

Born on the eve of the birth of nouvelle cuisine, in 1950s France, Daniel grew up just outside of Lyon. Daniel was trained by the grand masters of French gastronomy—the pioneers of nouvelle cuisine—Roger Vergé, Georges Blanc and Michel Guérard, who were considered among the finest chefs of the 20th century.

Armed with training in the best of French techniques and an understanding of seasonality and ingredients, Daniel arrived in New York after a stint in Washington, D.C, where he was employed as a private chef for the European Commission.

Daniel began to make his name in New York as the executive chef at Le Cirque, from 1986 to 1992, where, during his tenure, the restaurant became one of the most popular in the country.

In 1993, Boulud went solo with his first restaurant, DANIEL, in Manhattan’sUpper East Side, the city’s most exclusive neighbourhood. In 1998, restaurant DANIEL relocated and the original DANIEL was re-launched as Café Boulud, before launching db Bistro Moderne and Bar Boulud, also in Manhattan.

Since Daniel’s arrival in New York in the early 1980s, the city’s food landscape has advanced dramatically—from the variety of cuisines on offer to the standard of food and service. Daniel says that he has grown with the city. “Food culture [in NYC] has evolved, not just on the French side, but Korean, Chinese, Japanese—on all sides. As a chef and restaurateur I’ve evolved, too. But from the beginning I felt that I wanted DANIEL to be a restaurant that is important for New York and really represents its location.” Daniel explains: “Seasonality has always been a driving force. What makes restaurant DANIEL special is the fact that, although I’ve never taken myself too seriously, I’ve always taken the business seriously—from the attention to each guest to the atmosphere of the restaurant. There are few places like DANIEL—where you, the guest, are really made to feel so special.”

Boulud’s staff at DANIEL includes a brigade of 35 chefs, of which the average age is 25-26 years. A young and celebrated team, headed by Jean François Bruel, who value their one-off guests and regular visitors in equal measures. “New York is not just a destination city— people live there as well. We have the locals who support us and they’ll know the name of everyone at the restaurant and come in once a week or every two weeks.” Daniel explains: “I never wanted DANIEL to just be a place where people come to make a pilgrimage—we also need regular customers.”

While Daniel recognises the importance of keeping on top of trends, he balances tradition with evolution to satisfy old and new guests, he says: “We have customers who have been coming to us for many years and want certain dishes and wines on the menu, but we also want to attract new customers of a new generation.”

Daniel creates new interpretations of traditional dishes and uses Asian influences in his menu in dishes such as the mosaïc of quail with pickled hon shimeji, which is served with Muscat grapes, sherry gelée, wasabi cress  and dandelion marmalade. Daniel explains: “We might like the combination of a dish, but we’ll try and create a new interpretation of it every year by using a different technique or composition. Not every recipe is a classic—some are more spontaneous and seasonal, while others are classics that we don’t want to interfere with.”

Daniel uses the USA as his larder, admitting that if an ingredient found in the west coast is of better quality than its east coast counterpart, he’ll use it. “If I find wonderful duck in California and I cannot find the same quality in New York or the east coast, of course, I buy the duck from California. In America, distribution and the quality of food we get is amazing, so the produce arrives in the best quality.”

This autumn sees the launch of Daniel’s sixth cookbook, My French Cuisine. The book visits recipes from restaurant DANIEL, but also include more accessible recipes for the home cook, with a foreword by Bill Buford, the American journalist who has spent the last two years researching in Lyon. Boulud follows in the trend for highlighting his ingredients, visiting farmers, fishermen and suppliers, on a journey of his favourite produce, in the book.

Daniel is recognised both in France—awarded the Chevalier de la Legion d’Honneur in 2006 by the French Government—and in USA—serving as chairman of Bocuse d’Or USA and inducted into the Culinary Hall of Fame in January 2013—firmly cementing his legacy, as one of the great influencers of modern French cuisine.

Find out more about Daniel Boulud .

Don’t forget to pre-order your copy of #FOURUSA here…