Blaine Wetzel fishes, forages and farms. But what makes him stand out from the rest?

The 26-year-old chef was born and raised in Washington State, USA, and has worked in the kitchen since the age of 14. “When I was still in high school, my parents stayed at The Phoenician hotel in Scottsdale.” Blaine explains: “I didn’t get to go, but they brought back a video of their stay. I was so impressed I called the chef and asked for a job. He told me to come down when I finished school. So six months later I just showed up. The chef remembered me, and I started the next day.”

12 years down the line and Blaine is head chef at The Willows Inn, Lummi Island. The secluded and unspoiled island, part of Washington State, is positioned off the north-west Pacific coast, off the south-west waters of Canada in the archipelago that includes the San Juan Islands and the Gulf Islands in the Salish Sea.

Blaine is one of the young protégés to emerge from the New Nordic Cuisine scene, having worked under René Redzepi as chef de partie at Noma in 2009 and 2010, with René describing Blaine as “a rare and amazing talent.”

Before relocating to Copenhagen to take up his position at Noma, Blaine worked in some of North America’s top kitchens, including Michel Richard Citronelle in Washington D.C. and Aubergine at L’Auberge Carmel, Napa Valley.

Blaine was midway through his year-long stint in Copenhagen when he spotted a Craigslist job advert seeking a seasonal chef in Lummi Island. Six months later, in late 2010, he joined The Willows Inn.

Lummi Island is a foragers dream. Blessed with the island’s fresh produce, including salmon, orca, blackberries and wild roses, Blaine’s cuisine is characterised by island life.

Creating brilliant tastes, textures and visually stunning dishes defined by the island, Blaine has use of The Willows Inn’s smokehouse to cure and flavour fish and meat. He also holds regular foraging outings, teaching his guests how to use organic and sustainable farming techniques in the hoophouse and about the edible island foliage. Everything on Blaine’s menu is made fresh each day, with every dish telling a story of the land.

When Blaine started at The Willows Inn, he had one part-time sous chef and one dishwasher working in the kitchen with him. Less than two years later and Blaine has more than ten staff and The Willows Inn is well on course to becoming one of the next leading destination restaurants in North America. 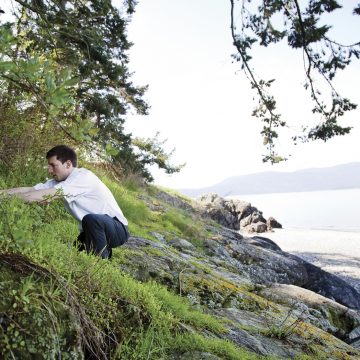 Boy On An Island

Kristian Baumann of restaurant 108 pop-up in Copenhagen’s NOMA, shows us why he is the talk of the town with this recipe for pollock fishcakes…Yum!

Rene Redzepi has shocked the world over by announcing his plans to convert his 12-year-old award-winning restaurant into an urban farm, complete with new look restaurant and a floating island. 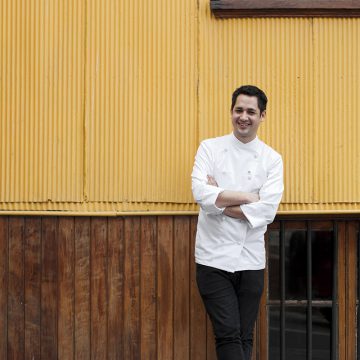 One to Watch | Francisco Araya

Francisco Araya is the executive chef at Alegre Restaurant at the Hotel Palacio Astoreca, Valparaíso, Chile. And, with a resume to impress even the most jaded of culinary critics—including a stint at Mugaritz under chef Andoni Luis Aduriz and even Ferran Adrià’s El Bulli—he’s certainly a culinary figure to keep your eye on…