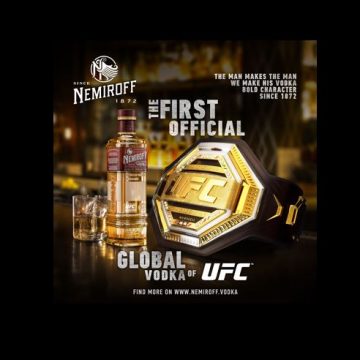 Premium-quality Ukrainian vodka brand, Nemiroff, has continually partnered with strong-charactered individuals who strive to be their ultimate best. Their latest partnership with the Ultimate Fighting Championship (UFC) is no different, and Nemiroff’s sponsorship of the event brings the stature of the brand as an “Indomitable Spirit” to life.

As from September 2018, Nemiroff Vodka has been working the with UFC as a global partner and will continue to do so on a long-term basis.  Nemiroff is the first, and only official vodka sponsor of the franchise. Global Chief Marketing Officer of Nemiroff Vodka Company, Irina Zhygunova, explains, “This alignment is natural for Nemiroff Vodka, as both brands share a common DNA – a fighting spirit.”

A strong global audience gaining exposure to the Nemiroff brand via media and onsite activations at the local level was one of the driving factors that put this partnership into play, along with several other significant determinants. Irina comments, “As we grow our audience and distribution we will align with UFC fans on a grassroots level.”

The shared characteristic of willfulness of both brands makes this partnership an authentic one, illustrates Irina: “We take our inspiration from men around the world who make their own way and stand out from the crowd.  The UFC fighters are not only inspiring but inspire others.  We make our vodka for those who inspire.”

“Our vodka is for the invincible, confident consumer.  Our audience is free-spirited,  strong and energetic and they relate well to the UFC fighters. There is a natural synergy between both brands.  The plans to create a stronger UFC platform are in alignment with the growth we are expecting for Nemiroff,”.

“In terms of exposure, we are working with the UFC on content creation for their audience.  Their fans at home and at the live events have already seen our logo and bottles in the octagon.  We’ve also worked with the UFC to create video content that plays during the fights,” said Irina Zhygunova.  With the UFC recently signing a broadcast deal with ESPN, the sport will be brought to an even larger global audience, and so, Nemiroff’s reach will, too, expand.

With Nemiroff Vodka already one of the top ten vodka brands worldwide, this partnership is set to catapult the brand to even greater heights.

Read more about the partnership and the UFC here.