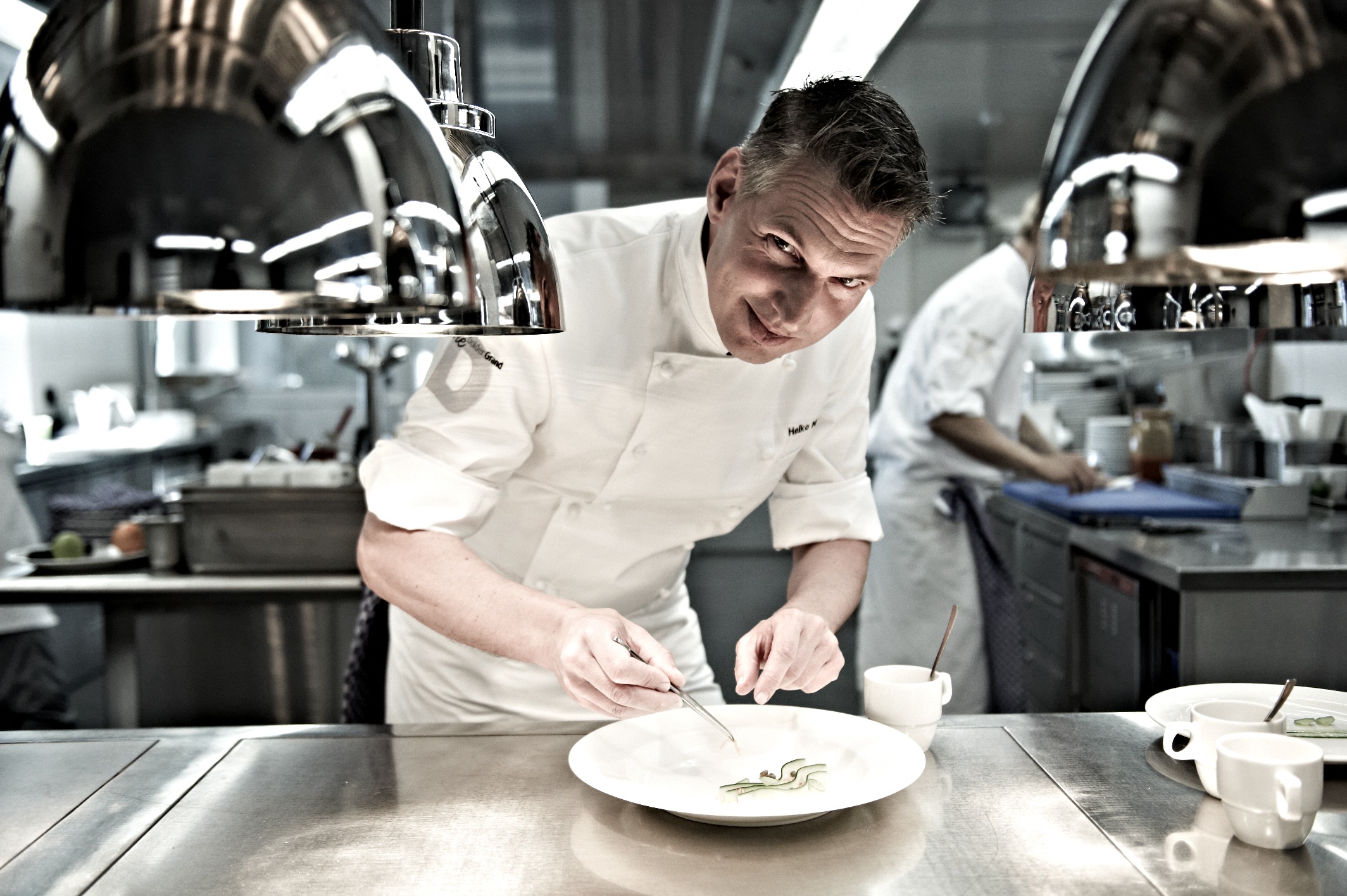 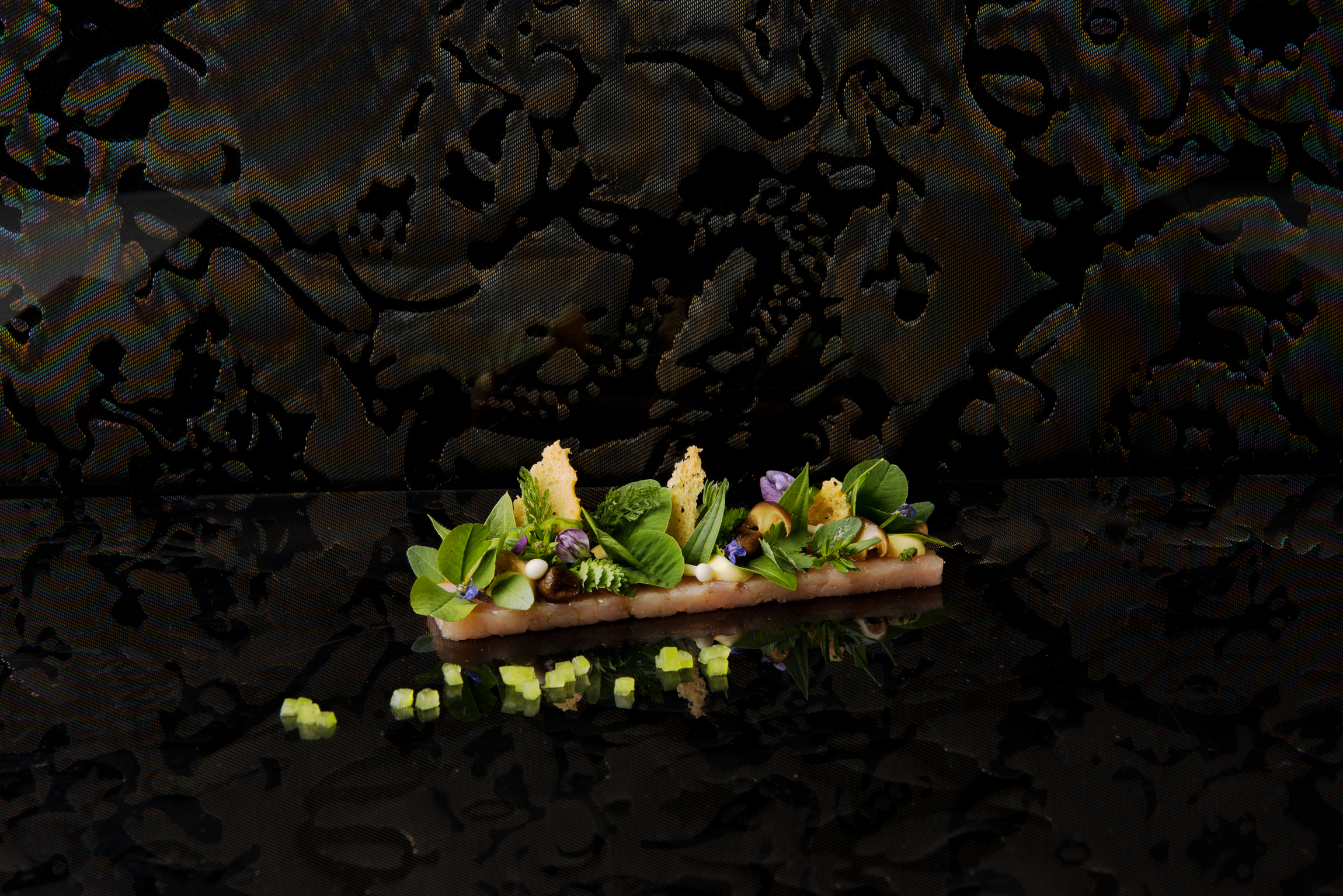 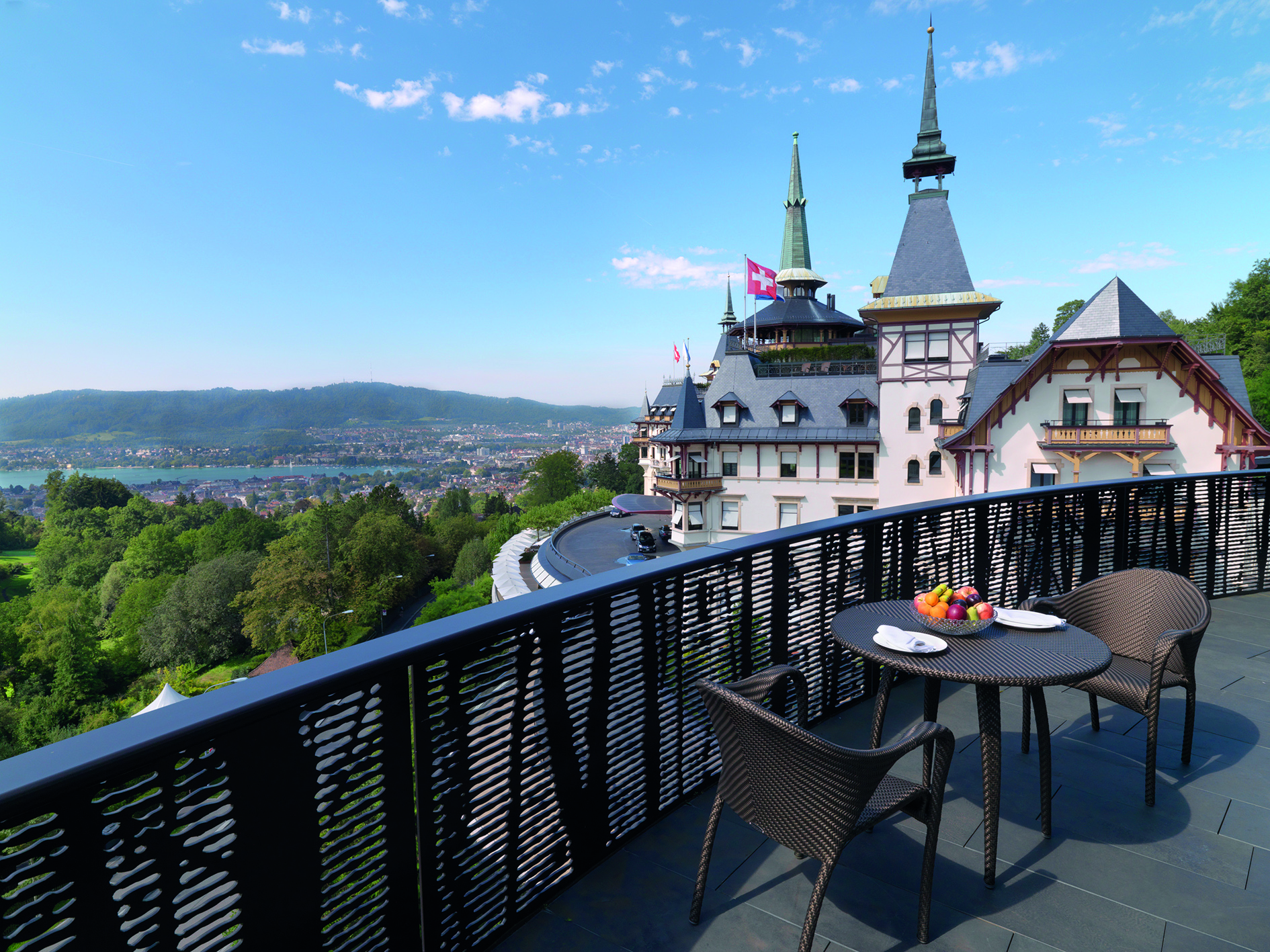 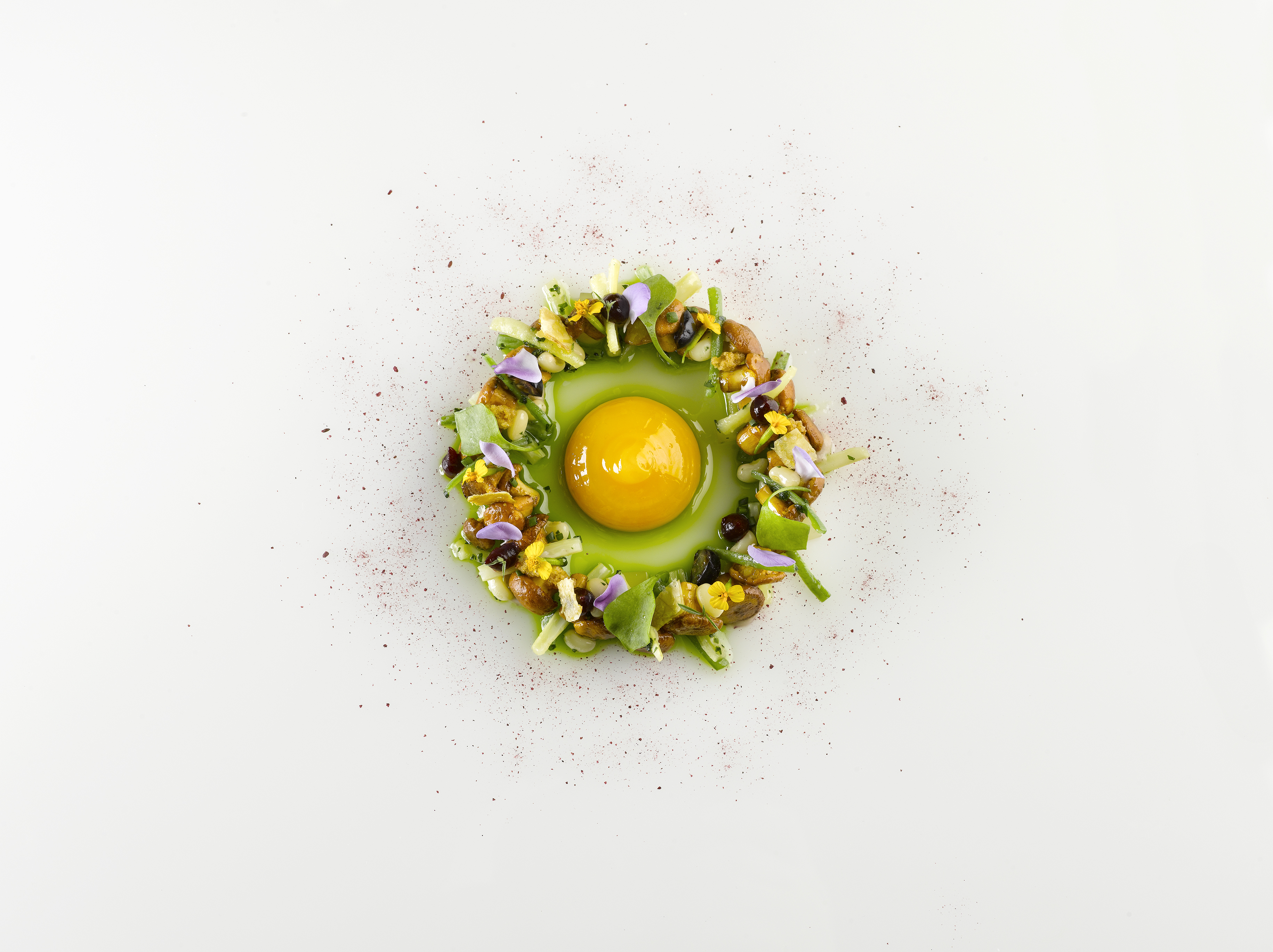 Heiko Nieder has refined his style and puts a spell on his guests with modern, surprising, and very poignant creations that originate in the mind’s eye. An experience highly recommended by Ingo Scheuermann.

As you drive up the Adlisberg in Zurich, the majestic Hotel The Dolder Grand rises on the forest’s edge. A Grand Hotel at its best. It underwent a substantial renovation by star-architect Norman Foster between 2004 and 2008, providing it with a new modern glow and shifting the main building, which dates back to 1899, into the right light. It is a special, almost magical, place where you access a unique world. Ambiance, service, and quality offered at the highest of levels. It is wonderful when a platform for the best of cuisines is offered in such a setting. At the in-house fine-dining restaurant The Restaurant, the subtle modern-chic theme is continued. There are truly few more beautiful restaurants in the world.

Right from the start, Hamburg-born Heiko Nieder’s culinary developments shine through. Since 2008 he has been refining his style until mastering his current philosophy, which reflects the house ambiance whilst effortlessly integrating with the main concept.

How does such a cook come to be and what are the key moments in his development? How does a young cook emancipate himself from his mentors? In his earlier days, a younger Heiko never wanted to become a cook, as ‘’it makes you get fat’’ he reminisces today with a wink, not having ever had any such problems. His grandmother, however, was a cook at the Hamburger Schlachthof canteen, where he would visit during his childhood holidays. The smell was distinctive and the process of creating good food out of select ingredients (in those days one could still find honest home-made food at canteens) left a lasting impression. His family would also consistently cook with local and fresh ingredients. After completing a tea and vanilla import/export internship, Heiko Nieder reached the conclusion that a 9 to 5 office job was not suited for him. At the same time, a neighbourhood friend who had trained as a waiter and cook would often take him into the kitchens. By showing him the in’s and out’s, as well as how to appreciate good quality produce, Nieder had little choice but to learn how to become a cook.

Next to the Atlantik, the Vier Jahreszeiten was the go to place for a cook apprenticeship in Hamburg, especially as they offered a variety of positions (banquet and various restaurants), which would provide a broad insight into the profession and its many processes. ‘’Back then, one would have to wait for a whole year after applying due to high demand, which I spent by branching out into a Page internship that has granted me a deep understanding client-focused service’’, explains Heiko Nieder. He was ultimately a valuable apprentice and not cheap labour (how it often is nowadays), as the aim was to impart true skills and knowledge. After the completing military service, Nieder worked as a young Commis in Hamburg’s legendary Le Canard under the tutelage of Josef Viehhauser – classic cuisine that opened Nieder’s eyes to product quality and the art of ‘less is more’. However, Michael Hoffmann who acted as Viehhauser’s kitchen chef was a defining figure. His positive obsessiveness is a trait that Nieder adopted as his own. ‘’Michael made me into a cook, and with his enthusiasm transmitted his life’s pursuit of the perfect dish’’ reminisces Nieder, while adding ‘’I was recommended my next career step towards Dieter L. Kaufmann by Michael, in order to perfect my craft and precision, a time I still draw from today’’.

A cooperation between Hoffmann and Nieder was planned to take place in the then newly opened Vau in Berlin, which was owned by a regular guest of Viehhauser’s. ‘’Networking is essential for me, as it has allowed me to go far in both my private and professional life’’ says Nieder. However, Nieder did not end up staying at Vau, and moved on to become Sous- and then Headchef for Kolja Kleeberg. During this time, Nieder was able to fully exploit his innovative prowess due to the creative freedom and independence that he was offered and this was what drew him there. “Ultimately, we were always a bit ahead of our time at Vau and put on small and big surprises, never to impress but purely to enter new territory. I think that still stands out today.”

His networking also put him in touch with the Dorint-Group, with whom he planned a gourmet-restaurant at a new hotel in Bonn, where the plan and concept was developed around Nieder being head chef and his close relationship to the restaurant manager. In 2002 L’Orquivit burst onto the scene, with Nieder producing modern yet independent cuisine, which led to the development of the first version of his ‘own’ cuisine, characterized by the varied influences of the then developing Internet and numerous visits to restaurants world-wide. In spite of it being the peak of popularity for molecular gastronomy, Nieder did not let it overly influence him, but did however adopt modern techniques into his repertoire. It was through another friend in his network, Jens Rittemeyer who he met during a stint with Dieter Mueller, that he learnt of an opening as Head Chef of the newly opened Dolder. After an intense learning process, Nieder began working at The Restaurant in 2008. ‘’Ultimately, it was something in between winning the lottery and a fairy tale’’, he claimed. He then unconsciously initiated the rapid development of the Zurich gourmet scene. Success did not take long to follow, despite the somewhat traditional and expectant Swiss clientele, who gradually succumbed to Nieder’s cuisine – including a midday amuse-bouche menu (‘’One can definitely find inspiration in Dieter Müllers format’’) as a representative cross-section through current menus. “At the moment, we are always busy, the lunch business is worthwhile,” says Heiko Nieder. “Ultimately, I simply want to entertain my guests with extraordinary taste experiences, without offering them a show. It also has to be light, so that the guest should always be happy to have one of our homemade pralines at the end of the up to 12-course menu.”

How do Heiko Nieder’s taste experiences come to be? First and foremost with moderate surprises that have not yet been tasted, produced in a particular manner or combination, without being too demanding – Nieder’s kitchen is created with the enthusiasm for a great product: “I cook what I like” describes Nieder when discussing his first creative steps. On his continuous search for products, Nieder found a sea urchin from the Faroe Islands, which has a slightly sweeter taste than the usual briny tang. He immediately came up with innovative associations, for example; pairing it with cantaloupe and accompanying this with a sensational sesame dressing, using a base of oil made from unroasted and roasted sesame and homemade black tea vinegar, a dialectic of sweetness and earthiness.

Thus a wonderful bridge is built between the inherent sweetness of the melon (enriched with sea urchin aroma) and various fungi elements (enoki and silver ear fungi pickled in soybeans as well as their gel) to bring the dish together. The bridge element is composed of rice wine foam, an iodine-rich jus composed of samphire and kelp, with Paztizz tops for herbal accentuation. A way in which sea urchins have certainly never been eaten before – surprising yet catchy, unusual but trustworthy.

The entire creative process is solely in Nieder’s head, only after the recipe has been written down do a few samples get prepared, which in turn are used for fine-tuning. ‘’Quite rarely does a thought-up dish turn out to be a flop’’ confesses Nieder with radiating proudness and a wink.

Such a way of working is only accessible to Chefs who possess rich experience paired with a talent for highly associative thinking.

Commenting on recent developments Nieder said ‘’I have ultimately gotten better since my marriage and the birth of my children, because I move around less and have to concentrate on my immediate surroundings, so in turn my cooking has become even more Nieder’’.

And this can be clearly seen, as he has in recent times been utterly unimpressed by popular fashions and trends. Instead he has concentrated on conjuring subtle yet surprising flavours with profound, essential, yet light sauces and is undoubtedly on his best form yet!