The way to Peter Goossens’ heart is via Flanders and all of its wonderful produce, writes Aimee Pavitt exclusively for FOUR’s International edition…

It’s not that I’m expecting gushing superficiality; I’m just taken aback by his modesty. I guess actions really do speak louder than words. After all, to become one of the youngest chefs ever to earn two Michelin stars takes a lot of hard graft.

Peter Goossens is quietly spoken. He gets straight to the point, but measures his words. At first contact, he is succinct and reserved. This isn’t what I am expecting. In his native Belgium, he is a star. He features on culinary reality TV shows and has even co-created a cooking channel (Njam) to encourage people to eat well at home.

It’s not that I’m expecting gushing superficiality; I’m just taken aback by his modesty. I guess actions really do speak louder than words. After all, to become one of the youngest chefs ever to earn two Michelin stars takes a lot of hard graft. And even if winning a third Michelin star, plus a Gault Millau rating of 19.5/20 is enough to make a chef a household name, Peter Goossens is more concerned with the integrity of his work, rather than the razzmatazz that comes with the accolades.

When I call for a chat with this highly mediatised yet mysterious chef, I am both dazzled and confused. Having gained so much recognition for his work, is he not eager to conquer the world, to put Flanders on the culinary map? “No,” is the short answer. In any case, he doesn’t think it wise to spread himself too thinly. Perhaps he’s right, if you reduce the supply, you increase the demand. Let the world come to Hof van Cleve, it’s worth the detour!

Kruishoutem is a charming village located in the Flemish Ardennes in the Belgian province of East Flanders. This nugget of geographical information is very important, because it truly defines the man and the food. As he puts it: “Local produce is the DNA of my cuisine. I work a lot with local and regional produce, such as white asparagus and seafood —the sea is only forty minutes away from us here, I need look no further! I use sole and cod, langoustine and shellfish all from the North Sea. So it wouldn’t be easy to do Flemish cuisine elsewhere, not with fresh produce. It is difficult enough to find good staff right here,” and, Peter says, it is also a prerequisite that his team have a real feel for Flanders. “I like for my team to be authentic. But I do have some young people who started out working for me and have gone on to set up their own restaurants elsewhere.”

So while Hof van Cleve can certainly be considered an incubator of international culinary excellence, Peter Goossens’ roots are firmly planted in Flemish soil, along with the produce he cherishes. “We work a lot with local vegetables. In the old days everyone had a vegetable garden, which is good because they’re full of anti-oxidants. I think we’ve lost the notion of eating seasonal produce. Timing is essential at all levels, in nature like in cooking.”

This respect for nature is reflected in Hof van Cleve’s menu, which is redacted in such a way that it describes both the provenance and seasonality of the ingredients, while also taking diners on a sensory journey. The destinations include: Market Walk, Field, Garden and Woods and Freshness of Nature (as well as an à la carte menu).

This holistic approach to eating is close to Peter’s heart and one of the reasons behind his television work. “Njam is something we created with Studio 100, which is quite big in Belgium. I think these programmes are really important because they enable people to see how a dish is prepared, and so they are inspired to start eating well at home. I encourage people to use good, local produce and more importantly seasonal produce.” Peter uses strawberries as an example of how consumers often eat of out season.

“You know people eat strawberries and raspberries no matter what the season, these days, but we should only be eating what is freshly grown this season.” Chef Goossens has to wait all year round to indulge in his own personal passion for white asparagus, but as he tells me: “It’s worth the wait,” and he kindly shared this little pearl with the readers of FOUR: Asparagus; Flanders style. “Boil the white asparagus in salted water. Next, take an egg and boil for five minutes, before removing the shell. Mash with a fork and mix with melted butter to make a liaison. Add pepper, salt, nutmeg and finely chopped flat parsley and serve over the asparagus. When they’re in season, I eat this every day!”

Asparagus aside, I ask the chef about the new look Hof van Cleve. The restaurant recently underwent a complete renovation, which was finished in the space of one week. The result is stunning sobriety. The attention to detail is astounding.

Peter and his wife, Lieve, designed the restaurant themselves with the help of architect Francis Van Damme. There are no fashion follies or fads, but carefully selected pieces by Belgian designers; pieces that reflect both complex craftsmanship and clean lines. For chef Goossens this design is a natural and coherent continuation of what he does in the kitchen. For example, the porcelain designed by Anne Van Hoey is called ‘Geometry’, which brings us to Goossens’ penchant for precision. “At Hof van Cleve, the key word is ‘taste’. The ornamental element of my restaurant should reflect great taste: the taste of the food, but also the great taste of my clients! Precision is key. There is no room for error. Everything is modern and everything is Belgian. It is contemporary and fresh. But the key thing is to make it feel comfortable. You know, eating isn’t just about a meal. It’s an experience. The venue and the kind of welcome you receive are very important. It is vital to make people feel relaxed and for them to have a good time. The food is part of it, naturally, the client must always leave with a smile on their face.”

Peter Goossens entrusts this task to Lieve, who manages front of house, making Hof van Cleve somewhat of a family affair. In fact, if we set aside the style, elegance and Michelin stars (bear with me) the word that springs to mind when talking with this chef is ‘wholesome’. Funnily enough, when he bought Hof van Cleve, one of the conditions of the sale agreement was that he would not serve ‘gastronomic’ food for the following five years. I never had the chance to ask how that made him feel, but I should not imagine it bothered him too much, because ‘prestige’ is not a buzzword for Goossens, though ‘produce’ and ‘precision’ are. And despite his deeply private nature, I really sense that when he opens his restaurant, he opens his heart. For chef Goossens, home is where Hof van Cleve is. 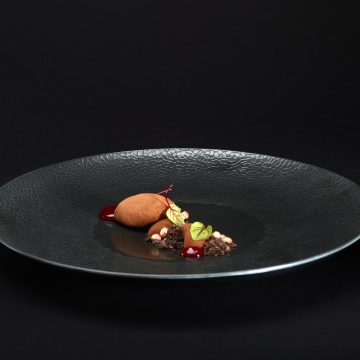 Here at FOUR we can’t quite say goodbye to chocolate week, so why not stretch yourself and try one of these starry recipes by Peter Goossens, Gaetano Trovato, Vincenzo Guarino and Heinz Beck? 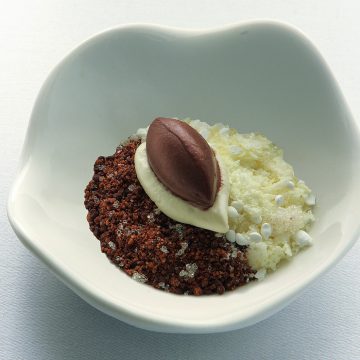 Peter Gilmore, the acclaimed chef of Quay in Sydney, gives you a recipe to sweeten up your week…Yum! 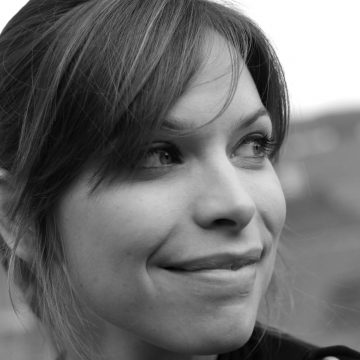 In 2003 Aimee swapped Manchester for Paris as she embarked upon her ‘year abroad’; an integral part of her French Studies degree. She never came back. After completing her degree at the University of London Institute in Paris, Aimee moved to the continent in 2003. She worked in public affairs for a large ‘solutions provider’ in the pharmaceutical field before realising that this left a bad taste in her mouth. In search of her appetite, she took to translating as a way of honing her writing skills. Once she had become sufficiently annoyed with bettering other peoples’ work, she decided she should take up the plume herself. Unsure what to write about, she thought it best to start with what she knows: eating, living in France and latterly being a mother. She is also a voice-over artist and an ambassador for the city of Lyon, where she now lives with her partner Olivier and their son Reuben-Miles. To her great dismay, she is somewhat of a hit-and-miss chef and a complete disaster in the baking department. 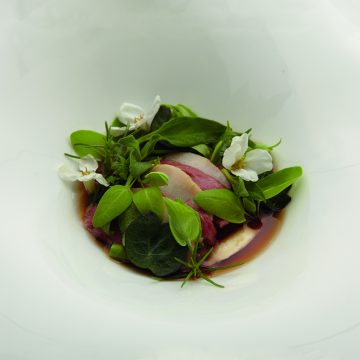 A Recipe by Peter Gilmore