Pierre Gagnaire has 11 restaurants to his name. Aimee Pavitt talks to the nicest man in the kitchen about the swinging sixties, Sin City…

“I try all the time to explain [to people] that what I do is cooking, quite simply. It is tender, it is gentle, it is love. That is all. I am no scientist. I simply try to bring joy to people through my food.”

Anyone who has ever hadthe pleasure of talking to Pierre Gagnaire will surely tell you how passionate he is. You’d expect that from one of the world’s finest chefs, but there’s more to it with Pierre. His is a special kind of passion, it’s not fuelled by ambition or perfectionism, it’s a passion of the purest kind: love. Pierre loves food, of course, but what struck me most when talking to him was his love of people. He tells me that all he wants to do is bring joy. It is as simple as that.

When Pierre calls for his interview, he is just about to open his restaurant in Courchevel, for the winter season. I imagine the clattering of an industrious kitchen, the sound of which is muffled by the snow and the swish-swoosh of skis upon it, and most certainly by the rumbling of some of the world’s most discerning tummies. Les Airelles is no ski shack, it is the most refined (Rhone) Alpine dining experience imaginable and it is close to Pierre’s heart as he spent many holidays here as a child. All this musing makes me wonder, with restaurants peppered around the world, from Las Vegas to Tokyo, Paris and London, does location inspire his creations? For example, The Parlour menu at his London restaurant, Sketch, has a section devoted to ‘comfort food’. Well, it does rain a lot in London.

“The location doesn’t inspire me so much as it draws me in.” He explains: “I am inevitably carried along by the atmosphere of a place because depending on the location I see things in a different light. Each new place generates its own energy and that means that I operate differently.

“I adapt. Take Las Vegas for example, it’s a great city; it’s a party city, it has a dense population and a lot of fast and fried food. At Twist, rather than resist those aspects, we embrace them and turn them into something elegant without it being ridiculous.”

So how does this translate at Sketch? As a small boy, Pierre dreamt of London and all that the swinging sixties represented, “British cuisine was really being turned around at that time in large part thanks to what Sir Terence Conran was doing.”

“London is a multicultural melting pot with its own specific codes; codes that are constantly being turned on their head with new foreign influences and cultural references. Worlds collide: the banking world is juxtaposed with the creative spheres of music and art, not forgetting sport. In the midst of this blend, I try to create something that is true to myself while also reflecting the city. The people are the cultural wealth of the city and they make up the subtle diversity that I really love.”

The menu at Sketch reflects this sense of humour with dishes such as Plankton soup and a foie gras burger served with ‘Sketchup’. And yes, it does contain a secret ingredient and no, he will not divulge it.

Indeed, an exploration of Pierre’s philosophy and recipes by Jean-François Abert is entitled Lucide et Ludique (Perceptive and Playful). As a Commandeur des Arts et Lettres, Gagnaire’s countrymen certainly recognise his contribution to the arts, but isn’t there a scientific element of this culinary exploration? The line goes quiet and I’m not sure that I haven’t heard a small sigh of exasperation.

I try to explain that my question is in no way pejorative when he comes to my rescue. “I try all the time to explain [to people] that what I do is cooking, quite simply. It is tender, it is gentle, it is love. That is all. I am no scientist. I simply try to bring joy to people through my food. To make people happy.”

The menu at Sketch also showcases some great British produce, including West Mersea oysters served with a lemon and ginger emulsion and dill, so I ask Pierre what his favourite British classics would be and I am delighted to discover that his fish and chips simply must be accompanied by mushy peas (“J’adore!”) and that he also really enjoys a smoked haddock soufflé (which features on the Gallery menu at Sketch).

For a chef whose cuisine strides confidently forward, while graciously acknowledging the past, Pierre loves the invention of the gastro pub.

“It’s a wonderful idea because it’s a way of preserving British culture with a focus on quality. What could be nicer: great produce and a sincere approach to cuisine that people enjoy in a warm and cosy atmosphere? It’s wonderful!”

Atmosphere is important to Pierre. Above the door of his Parisian restaurant are the words: ‘Prends le temps’ (Take the time). In his latest newsletter, he says: “Time to gather, time to share, to love and to rest.”

I tell him his family are very lucky to have him but he assures me it’s quite the opposite: “I am truly passionate about what I do, but personally I find that it can be destabilising. I couldn’t do it without the support of my family. Mind, I’m no spring chicken, so it’s true that the foundations of my family have long been laid and they are very solid.”

So who cooks for him? Can a chef of his calibre possibly enjoy eating out? “Of course!” He exclaims: “I can take pleasure in a simple bowl of rice but I do love to eat well. We alone are responsible for what we put in our bodies, so I go where I know I like the food and go to enjoy the food. Not to analyse it. You know, we chefs are not very rich, but we eat like princes!” He tells me some of his favourite places to dine in London: “I like the Roux brothers’ restaurants, Scott’s and an Italian place near Sketch called Cecconi’s.”

I have one last question, before chef Gagnaire really must get back to his team: Why the name ‘Sketch’?

“Ah, because it’s like the French ‘ébauche’… nothing is ever finished, everything is a work in progress and the best is yet to come.”

One wonders how on earth this cuisine could get any better, but I guess we’ll let Pierre tell us where to start. He has just opened a new restaurant at the Berlin Waldorf Astoria, Les Solistes (The Soloists). He may not be an internet sensation, but he’s certainly an international one and thankfully so, because the whole world really should be dining (if not dancing) the Gagnaire style.

Pierre Hermé is a French pastry chef most famous for his macarons, many of which have unusual flavour combinations. FOUR catches up with him to see what he’s been up to…

Paying homage to French Master, Pierre Gagnaire, FOUR gives you his recipe for a French classic with a Scottish twist for Dundee Pinky Foie Gras….Yum!

A contemporary and memorable recipe to try from award-winning chef Pierre Gagnaire, which is sure to excite and enthuse even the palette. Enjoy! 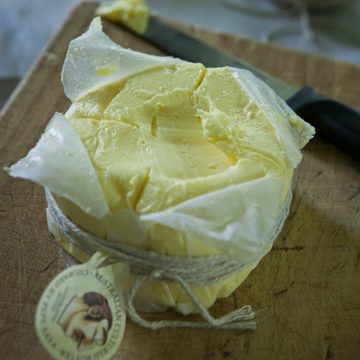 Pierre Issa (AKA Pepe Saya), butter maker, tells us about his day.