These days Eric Ripert is equal parts TV personality and chef. But it’s the fish he cooks at his New York restaurant Le Bernardin that’s the real star, he tells Rosie Birke for FOUR’s International Edition…

Eric Ripert is not an easy man to pin down. After weeks of trying and failing to set a date for our interview, we finally talk on the phone while he takes a break from filming his latest mini-series. “On the Table”, which started on the online Reserve Channel in July, is a series in which the French-by-way-of-New York chef interviews and cooks with A-list celebrities.

“We have fun,” he says now in his still-thick Gallic tones. “I’m cooking with people from inside and outside the world of food – personalities from music, art and Hollywood.” He won’t be probed too much on who his guests are, though fellow celebrity chef Anthony Bourdain appeared in the first episode, and he does reveal he’s done one episode with Pink Floyd legend Roger Walters – which goes some way to showing how comfortable Ripert feels among others at the top of their game: be they fellow cooks or rock and roll stars.

It’s hardly surprising, given his natural charisma and media-friendly appearance – all athletic build; white teeth; tan and a full head of silver hair – that this chef has made the leap from the kitchen to the screen, but which world does he prefer? “I like both,” he insists. “I find both experiences very interesting and today I’m at an age where I can share my knowledge of food through media and TV, and also through mentoring my team at the restaurant. I have about 45 cooks, and my two sous have been here for 18 years. I usually shoot [television] in New York which allows me to do both, so I’m often at the restaurant.”

Over the past two decades, Ripert has built up a reputation as perhaps the world’s best seafood chef at Le Bernardin, which is currently rated as the 19th Best Restaurant in the World and where he holds three Michelin-stars. Here he cooks elegant, simple dishes that revolve around the best sustainable American seafood from the east coast, working in influences from around the globe, as well as from his upbringing in the south of France. After so long in the same kitchen, it would be easy to get comfortable and send out the same favourite signature dishes, but the chef is devoted to making sure his repertoire at the restaurant is always fresh.

“We change dishes all the time and it’s constantly evolving,” he says. “Lately we’ve had some fantastic wild salmon from Alaska that I’ve been serving with yuzu sauce and pea and wasabi purée.

It’s very simple and refined. We cook it unilaterally – only from the bottom, very slowly. The salmon is rare, but cooked and warm – it has the consistency of custard because of the slow cooking.

“I’m also excited about the seafood medley – which is served in a sea urchin shell filled with cooked sea urchin custard and topped with shellfish: scallops, clams, caviar, langoustine, shrimp and crab, served with a dashi broth which is smoky thanks to the bonito flakes it’s made with. That’s very popular right now – at the table we pour the dashi on top of the shellfish and the custard.”

As is evident from the above dish, while he concentrates on American fish and seafood from the east coast (“I believe the east coast produce has a much better flavour than the west coast”), Ripert is inspired by international influences – something he says grows organically from his location in a global capital. “In New York we’re very lucky because we find great quality ingredients from all over the world – we use some Asian, some South American and techniques from all over the place. It’s a natural fusion because we’re inspired by our surroundings which are very multicultural.”

That said, he admits missing the European produce he grew up with and cooked with in France under his mentor Joël Robuchon – the chef that would eventually send him to America. “It’s different from Europe,” he says. “It’s difficult to match the beauty of turbot and Dover sole, but the fish we get is tasty and fresh. I still use a lot of influences from the Med – I’ll always carry it with me and I can’t forget how good it is.”

In a world increasingly colonised by futuristic cooking processes, Ripert’s kitchen is comparatively classic, with a lot of pan-searing and grilling – the fast, light cooking required for the best fish and seafood. “We use mostly traditional gas and heat – we don’t cook sous-vide, because it doesn’t make sense to. You want the fish to be very fresh and cooked very fast, so yes, we’re more traditional. In terms of molecular technique, we use some at times, but only if it elevates the fish. It’s not about cooking for the technique – it’s more about incorporating it into our traditional way.”

Much of the fish is barely cooked at all, and some of it never comes close to a flame (there are whole sections on the menu marked ‘almost raw’ and ‘barely touched’), with Ripert marinating, finely slicing and curing some of his produce in dishes like wild striped bass tartare; baby fennel, crispy artichoke, black olive oil and lemon. He cites the Japanese fish and seafood culture as very influential. “I think in Japan they do a fantastic job – I’m very inspired by that,” he says.

The chef’s obsession with the fruits of the sea is something that’s been with him since his cooking days in France, where he was a poissonier for over two years. It’s the the delicate, easily-spoiled nature of the protein that still excites him. “I’ve developed an expertise and a love for it,” he says. “For the last 20 years I’ve been cooking fish – it’s very challenging because fish is very delicate, the flavours are subtle and I like that challenge.

“The fish dictates everything we do. Everything, each element on the plate, each ingredient should be there to make the fish better. We like our food to look good, but we’re more obsessed by the mantra ‘the fish is star of the plate’.” 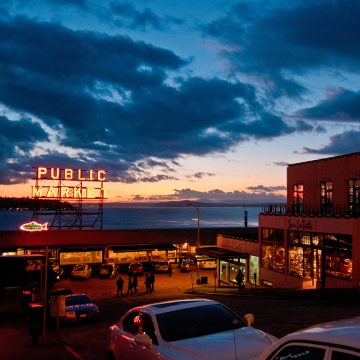 A Recipe by Eric Pras 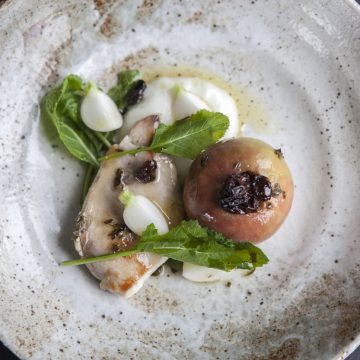 A Recipe by Eric Snaith

What’s better than enjoying Sunday with some great food? Chef Snaith gives you a recipe for partridge breast, turnip, baked apple to just that… 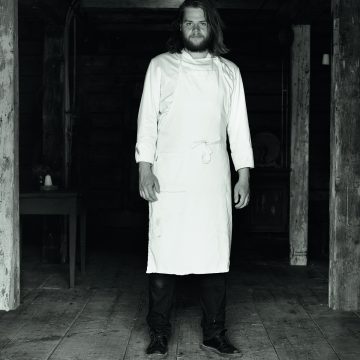