This week seafood master, Nathan Outlaw tells FOUR about what inspired his Michelin Star cooking and what we can expect from him in 2014…

How did it feel the moment you found out you had received your second Michelin star?

Brilliant! It was a culmination of lots of hours and hard work from everyone here at Restaurant Nathan Outlaw. I’m very proud of my team. Many of them have been with me for a long time and it’s fantastic for everyone to have their skill, passion and hard work recognized in this way.

Do you feel the same about Michelin stars now as you did when you were working hard to gain them?

I never really worked to gain them! My work isn’t all about Michelin stars although, of course, I recognize the importance put on them in my world. It’s about personal standards and natural progression. I’m never satisfied and will always look for something to improve on. My main aim has always been, and still is, to make my customers happy whilst maintaining the freedom to cook the food I love to cook. It’s more about building a reputation.

How does it feel being the only chef in the UK to hold two Michelin stars for a fish restaurant?

It surprises me that, as we are an island nation, there aren’t any more. However, we are a nation of meat-eaters and seafood is a niche market. Of course, I’m very happy that I am at that level!

What was the first culinary skill you mastered and when did you master it?

Making fairy cakes with my mum aged about 4. Professionally, it would have been how to use a knife correctly when I first started college. Mind you, I could already do it as my dad, who is also a chef, taught me. Knife skills are crucial in my line of business, not only how to handle them but which one to use for which job and how to look after them. Believe me, you get lots of cuts before you master it!

Who or what inspires you the most?

That’s a really hard thing to pinpoint. I suppose my answer would have to be snippets from everyone and everything. It depends on what’s happening at the time or who is around. It can be produce that I see growing, something that arrives from the suppliers, talking to the fishermen, the chefs in my kitchen, other chefs, something my kids say…the list is endless. Recently I’ve been inspired by the work of April Bloomfield and Mitch Tonks. Over my career, I suppose I’d probably say Rick Stein and Gary Rhodes.

Again, a difficult question to answer. I always think I could do better so being proud doesn’t really come into it. I suppose if I could pinpoint some highlights they would be gaining my first Michelin star at The Black Pig when I was twenty five, being awarded 2 Michelin stars for Restaurant Nathan Outlaw, having my first book ‘Nathan Outlaw’s British Seafood’ published and opening Outlaw’s Fish Kitchen in August this year.

What are you planning to bring to the table at the Melbourne Food and Wine Festival in March next year?

I’m very excited about cooking there. I’m looking forward to taking the fish and seafood locally and putting my ethos of cooking on it to see what happens. It should be great fun and I’m seeking to learn lots from the experience, as well as showing people there what I’m about.

Do you have any other plans in the pipeline from now until then?

I’m going to take a chunk of January off as it’s the only time of the year I do that. In early 2014 I have a TV series called ‘Hook It, Cook It’ being broadcast on Fox International Channels. I’m co-hosting with my friend Valentine Warner. I also have another book ‘Nathan Outlaw’s Fish Kitchen’ due for publication in May. To be honest, after what’s happened in 2013, anything is possible!

What is your go-to meal after a long shift in the kitchen?

Usually left over bread and cheese. Mind you, these days I’d rather go to bed and get some sleep than eat. I think I must be getting old!

If you could take a plane ride to anywhere in the world for just one meal, where would you go and why?

That changes too! I would love to return to Asador Etxebarri in Spain but I’d also like to do a tour of the best restaurants in Japan because of the seafood. I’ve never been there. Mind you, I think it might be a bit challenging at times.

This short film by Great British Chefs gives you an insight into Nathan Outlaw’s 2 Michelin-starred cooking, which champions the locally sourced Cornish ingredients found near the seaside town of Rock. 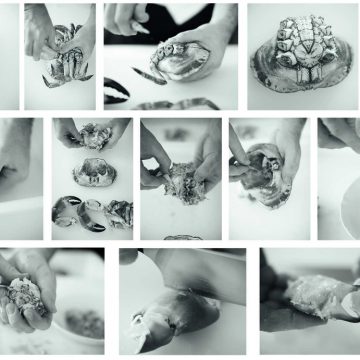 How to prepare shellfish by Nathan Outlaw