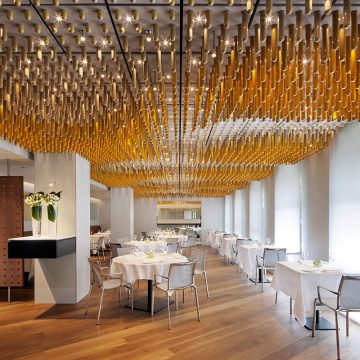 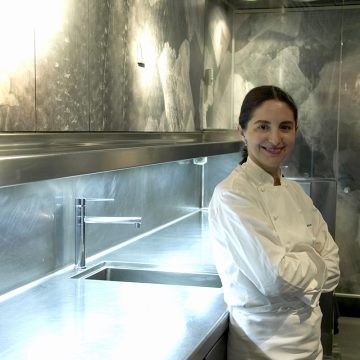 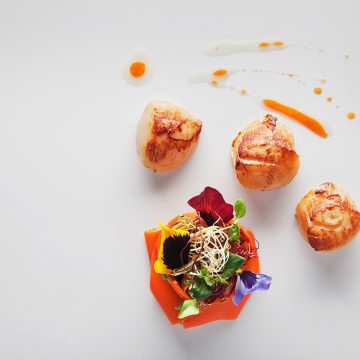 FOUR catches up with Elena Arzak of 3* Arzak in San Sebastian and 1* Ametsa with Arzak Instruction at The Halkin by COMO in London’s Belgravia, to find out what she has been up to…

What are your first memories of being interested in food?

There are a lot! When I was a child the food was very important in our family and one of my first food memories is eating rice milk with cinnamon at home. Rice milk is a traditional Basque dessert and I used to love going into the kitchen to find boiling milk on the stove with rice and cinnamon. The aroma was unforgettable! I alsoremember entering the kitchen of our family restaurant[Arzak, in San Sebastian],which has been running for over a hundred years,and smelling the cooking crabs. Crabs are very traditional in Basque country and I can recognise the smell anywhere. I still remember the first time I ate a truffle, too. The first bite I didn’t like and I remember thinking it tasted a little like eating earth but the second time I tried it I fell in love.

Where do you get theinspiration to createyour dishes from?

I get inspiration from all over the place. I am inspired by the cooking of my family and the food in the restaurant andwhere I live in Spain, which is characterised by traditional Basque cooking. I am also very inspired by the movement towards avant-garde cuisine. Even looking out the window gives me inspiration. If I see a blind covering the window with a lot of stripes, I think to myself, ‘I could do a dish with a lot of layers’. You can find inspiration in everything!

What was it like working under the tutelage of great chefs like Albert Roux, , Alain Ducasse, and ?

I was very young when I had the possibility to enter into these kitchens and I knew it was a huge honour. My father told me, ‘Elena, make sure you open your eyes. It’s good to look with your eyes. Don’t thinkof it as copying but as a way of bettering yourself. Every restaurant is another world. It has its own personality and the chef has his own cooking.’ When I first entered these restaurants, I knew they were very high level and I was only starting out [as a chef], so I had to keep telling myself, ‘Elena, it’s a long way until you can do all of this!’ That’s why I always tell the young chefs I meet to be patient because you need time to learn. The one thing I learned from all of these extraordinary chefs is that whatever you do, do it right and do it well.

Can you describe your philosophy?

Every chef has their own unique philosophy. I work in tandem with my father, which is something very unique to us. I would describe the philosophy of our food as a signature cuisine defined by the Basque culinary spirit, whichis both evolutionary and cutting edge.

What are a few of your most indispensible ingredients?

Our cooking is filled with the spirit of Basque cuisine so I like garlic, parsley, fish and peppers. We always adapt and experiment with our ingredients, too,though. We like using ginger, as they do in Asia, for example, but we adapt it to the palate of our patrons.

Can you describe your menu and how often it changes?

The menu is based on the market. We change it every day. It is a menu that is composed of 5 small appetisers. Then there is 5 half plates and two small desserts. What’s on the menu completely depends on the season and on the markets. We put the menu in the middle of the table but we are open to change, to fit in with taste and allergies. If someone doesn’t like one plate, then we change it. For example, if someone doesn’t like lobster, we change it. If you’re a vegetarian, don’t worry. If you don’t eat egg, don’t worry – we’ll change it! We are very open to all of that.

How has your style changed over the last few years?

Our signature cuisine is traditional Basque with a modern twist. In the last few years we’ve played with multi-sensorial cooking where all the presentations are important to the final dish. We present fish on a screen, which we worked together with Philips to create, which adds atmosphere to the plate. We like that our guests take part with the emotions of our dishes.

Having restaurants in both Spain and London — 3 Michelin-starred Arzak inSan Sebastian and Ametsa with Arzak Instructionin Knightsbridge — how do the locations differ and how do you adapt your cooking to fit in with each location?

London and San Sebastian are very different. In the beginning, when we first opened Ametsa with Arzak Instruction, it wasn’t easy. We are always learning from suggestions from our guests and from the responses of our critics. We always take the criticism in a good way, though — it’s a way of improving. We also have to pay attention to our patrons here and adapt our style to their taste. For example, we’ve noticed, people like green vegetables here a lot more than they do in San Sebastian. It’s the same with pickles and spices — we like pickles in San Sebastian but people like them a lot more here. Spices are much more available here than they are in San Sebastianand you can use them a lot more liberally because it’s a very multi-cultural city.

What was it like being named Veuve Clicquot’s Best Female Chef in The World’s 50 Best Restaurantsawards,2012?

I felt very surprised and very emotional. Imagine my parents and the staff at Arzak! They were very proud. For me, belonging to a group of chefs that work very hard to achieve what they do makes me very proud. I’m very thankful!

What is it like being a female chef in the sometimes very male-dominated culinary industry?

It’s a very matriarchal societywhere I live and grew up in Basque country in Spain and at restaurant Arzak, most of the chefs in the kitchen are and have always been women, so for meI’ve never had to question my importance as a female chef. I know there are women around the world who are in a very different situation, so for me the award [The Veuve Clicquot World’s Best Female Chef award] is a very special way of remembering Madame Clicquot, who was very advanced in champagne in France, and is a celebration of those women.

I will be going to Mani with Helena Rizzo who has been nominated as this year’s Best Female Chef and I’m really excited about celebrating with her!

Ahead of his visit to London to cook at Lyle’s London with James Lowe, FOUR speaks exclusively to top chef André Chiang to see what we can expect from his Octophilosophy…