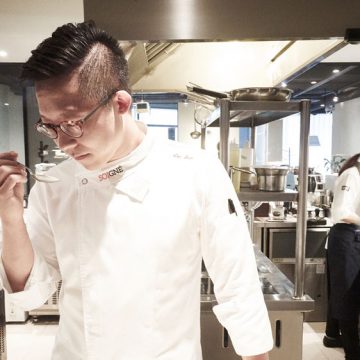 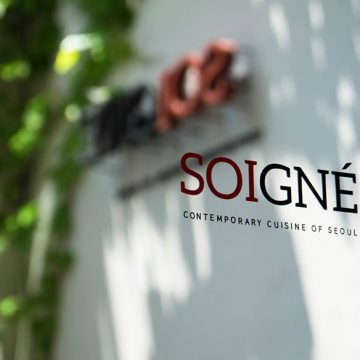 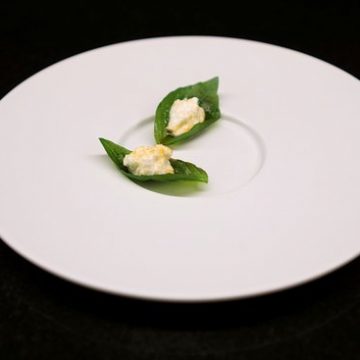 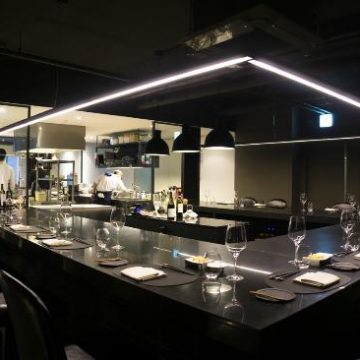 FOUR speaks to Jun Lee of Soigné, in Seoul, to find out who are his biggest inspirations and how he begins his creative journey in the kitchen…

Jun started to take cookery seriously from middle school. After graduating Kyunghee University majoring in Culinary Arts, Jun stages at ‘MADELINES’ headed by chef Susur Lee, learns the basic principles and virtues that a chef should always bear in mind and heads to CIA, New York to further his culinary studies.

During CIA, Jun stages at Thomas Keller’s ‘Per Se’ (Michelin 3 star) and learnt wholeheartedly the philosophy of cuisine art. Jun then follows Per Se’s head chef Jonathan Benno, and becomes an opening member of ‘LINCOLN’ a Michelin 1 star, Italian restaurant.

After returning to Seoul, Jun has showed a series of dining parties and pop up restaurants, starting from [JUN the PARTY] to [JUN the PASTA] se1, se2, [JUST DESSERT], [MILKSHAKE & POTATO CHIPS]. During these projects, Jun becomes more certain on his own culinary philosophy that the most important part in cuisine and dining in general is communicating and understanding. With this philosophy Jun has opened the enjoyable SOIGNÉ.

I have always known I wanted to craft something. I was obsessed with making things when I was younger. I realized as I grew older that food was a way for me to fully express myself. One of my earliest memories is from elementary school, standing on a chair in my kitchen, frying eggs on the stove.

I believe that I hold the same philosophy as any artist, musician, or director; that of limitless creativity. My platform is cooking, but my actual philosophy is not linked to anything culinary. That’s why my team and I change our entire menu every season, and host new pop-ups every month. I like to think of Soigné as more of a museum or a workshop, rather than just a restaurant. All of my teammates are the curators. We translate an art form into an edible dish.

Honestly, I’m not great at plating! But the important point for me is that the plating must be intrinsically linked with the personality of the dish. I very rarely use flowers in the presentation of my dishes, for example, unless the flower brings an absolutely necessary taste or meaningful element. My artistic vision is not about color or presentation. A dish can be extremely simple, but deliver a complete artistic philosophy. It is okay for plating to look dull, if it expresses the entire character of the ingredients and flavors. That is art.

My cooking philosophy specifically is that all aspects of each dish should work together to ultimately communicate something artistically. Individual ingredients are important, but so is harmony. Each item in the dish has its own job to do to be a part of the whole.

This is probably best explained through an example of a Soigné dish. We are currently serving a Napa cabbage dish which uses just five ingredients: butter, cabbage, seaweed, nutmeg, sunflower seeds. It’s a very dark dish, and the sauce covers everything. Nothing unnecessary is added to make it more ‘beautiful.’ The sauce is very creamy, and easy to consume, while the cabbage is fibrous and requires a little more work from the mouth. The respective, seemingly ‘unequal’ quantities are thus cancelled out by the amount of effort it takes to consume them. What’s more, the leftover creamy texture in the mouth provides a lasting echo of the dish, even after everything has been eaten.

In this way, the color, the textures, the quantities; everything is planned to meticulously work together to produce the required artistic effect.

Can you explain to us how the creative journey of your dishes begin?

It always starts with heavy pressure on my shoulders and a lot of stress! First, I try to brainstorm. I pick keywords and take note of every imagine that comes to mind. I don’t start with an idea and then come up with keywords. I start with everything that’s in my mind, and let the idea come from there. I try to identify similarities between the things I’m brainstorming, to hone in on a specific theme.

Google image searching is also a huge help. I don’t often Google existing dishes. Instead I’ll google a theme or an inspiration. I’m currently Googling all things light green, for example, for my next Korean zucchini dish.

It’s not always a pleasurable experience. I love to create something but it doesn’t mean I love the entire process!

Do you have a particular dish that was a favourite to create?

My original ‘baby’ was the spring onion dish which remained as the very first bite of our amuse bouche for the first ten seasonal menus at Soigné. For this dish, I took scallions – a very common seasoning ingredient in Korea – and served them with fermented clam, mascarpone cheese and lemon marmalade. I wanted to remove the scallions’ typical spiciness, and the mascarpone helps to take off the edge. The marmalade gives a similar fragrance to the scallion flower. I believe that this amuse bouche gave the perfect first impression of Soigné, and hinted as to how the rest of the courses would unfold. It took Korean ingredients and flipped them around, with a fresh culinary background.

My second favorite dish has to be the egg custard with domestic escargot, from our first episode menu. This dish was inspired by a traditional Korean anju dish of spicy sea snails with raw scallion and chili, which is usually served with egg an omelet roll to soften the harshness of the spice. I wanted to deliver something unusual, that at the same time tasted familiar. I took the way the egg and the spicy sea snail interacted together and reinterpreted it.

Korean people have often told me this dish reminded them of something, but they couldn’t be sure what. I know why, but they don’t know (laughs). Once I tell them the truth, they put the puzzle together and realize why they felt a connection to this dish. That’s the thing about fine dining; people want a luxurious experience, but they are always eating as people very strongly tied culturally and personally to their own memories and experiences of food. That is my job as a fine-dining chef; to bring harmony between luxury, and people’s backgrounds.

I also loved this dish because domestic snails are one of the least popular ingredients in Korea. They’re much milder, and with more of a seafood flavor, than meaty, European snails. I wanted to make this ingredient popular. Caviar, lobster, truffle … these are very easy ingredients to add to a dish to make it impressive. I believe it’s my obligation to discover ways to elevate a more diverse range of ingredients.

One of my most memorable moments would be when I was just started out in the cooking field, working as a stage at Chef Thomas Keller’s Per Se. One day I was put in charge of cooking a Korean meal for the restaurant staff. Staff meals were a big deal at Per Se. There were seventy staff. I was given an unlimited budget, and lots of time to prepare. One of the dishes I prepared was a cucumber kimchi side dish. When I came into work the next week, after my staff meal, I saw that my kimchi cucumber had been placed on the VIP board, as one of the dishes to be served to VIPs. Chef Jonathan Benno had put it there, along with braised short rib.

This moment really broke the stereotype of food, for me. At Per Se, there was no definition of a ‘staff meal’ or a ‘VIP meal’. The food for VIPs can be the same for the food for staff, if it’s good. Since then I’ve continued to try and break this food stereotype. I’m still working on it at my restaurant.

Chef Keller’s Oyster and Pearl is one of my favorites. It’s a very simple dish, with poached oyster, egg cream, and tapioca. It’s delicious, and conveys all of the wit of the chef himself. Sometimes people try not to see the original of certain luxuries; for some, a pearl is a valuable jewel, for oyster farmers, a pearl is the byproduct of a food ingredient. There is an invisible wall. A disconnect. This dish really played with that idea. I also love playing mind games with food!

Whose restaurant would you most like to eat at and why?

Per Se, probably! I very much admire Chef Keller.

I’d also like to try Next, in Chicago, by Chef Grant Achatz. He also operates an episodic menu, and has the freedom to do some fantastic, crazy things. We ran a movie themed menu a couple of years ago, which was actually less popular than I expected, because a lot of the context for Korean guests was missing. Next recently had a movie themed menu too, which looked great, and contained dishes inspired by famous movies and iconic visuals. I would have liked to have tried that menu, having also experimented with that concept myself.