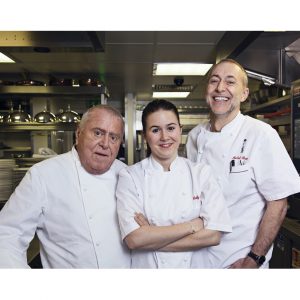 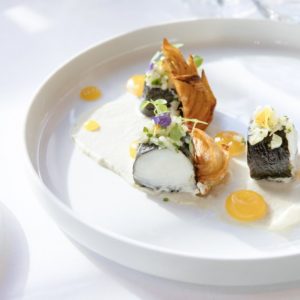 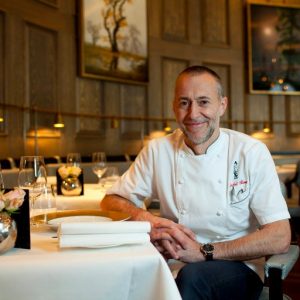 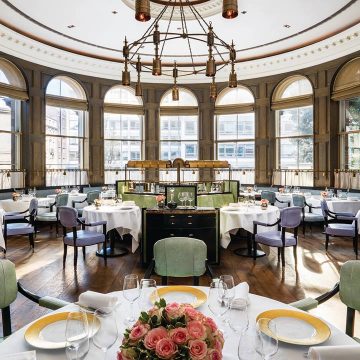 To celebrate the 10th anniversary year of Roux at The Landau, The Langham, London is delighted to host a one-off celebratory evening with three generations of Roux chefs cooking in the Roux at The Landau kitchen together for the first time on Friday 24th November.

To commemorate 10 years of Roux at the Landau, father and son team Albert Roux OBE and Michel Roux Jr will be joined by Michel’s daughter Emily for an unforgettable dream team effort. As commented by Michel: ‘Roux at The Landau has enjoyed such a success over the years and it is fitting to unite with Dad and Emily for this 10th anniversary year. We are all really excited’.

Tickets for the night will be priced at £395 with 10% of all proceed going towards Roux at The Landau’s chosen charity, DEBRA, the national charity supporting individuals and families affected by Epidermolysis Bullosa (EB).

The evening will start in the award-winning Artesian, with Belle-Epoque Champagne provided by Perrier-Jouët, followed by a delectable five-course tasting menu against a backdrop of live music and a baby grand piano. Each of the five courses will be accompanied by one of the following fine wines: Gevrey Chamberlain 1er Cru, Domaine Jacques Prieur 2012, Pinot Gris Sonnenglanz Grand Cru Domaine Trapet Alsace 2011, Puligny-Montrachet Les Referts 1er Cru Olivier Leflaive 2014 and Château Doisy Vedrines, Sauternes 2003. The dinner will be followed by a Louis XIII tasting.

At the helm of the event is Chris King, Executive Chef of The Langham, London and shortlisted in this year’s Hotel Cateys as ‘Hotel Chef of The Year’. As a protégé of the Roux family, Chris has championed the partnership with The Langham, London from the start. As he commented: ‘It has been so satisfying to see the fruits of this partnership develop. It all started here at Roux at The Landau and we are very proud of what has been collectively achieved’.

In quick succession to the 10th anniversary year, January 2018 will bring several exciting developments to Roux at The Landau including a new look interior with a counter island where guests can interact with chefs whilst enjoying seasonal dishes for which the Roux at The Landau is known.

As commented by Michel Roux Jr: “we are absolutely delighted to celebrate Roux at the Landau’s ten-year anniversary. Over the past ten years, London has become a melting pot of international cuisines with some fantastic additions to our culinary landscape, so to reach this milestone is an incredible achievement. We are very proud of the team’s extraordinary work’.