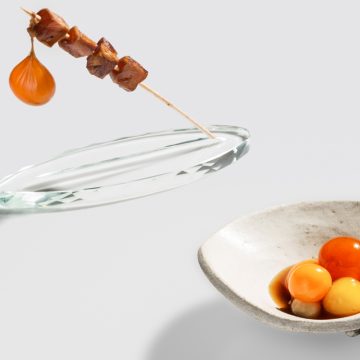 Those who wish to experience this renaissance man in his element will get their chance when Quique Dacosta shows the Restaurant Ikarus in Salzburg’s Hangar-7 what he can do in November 2017.

It may sound like a fairytale, but this is the reality of Quique Dacosta’s incredible career: as a teenager, he started out working as a kitchen porter in the restaurant that now bears his name. Since 2009, the head chef has run the Quique Dacosta Restaurante, stunningly surrounded by the Mediterranean and one of just nine Spanish restaurants to have been awarded three Michelin stars.

But a life spent over the stove was not the one he had always dreamed of – when he first came to Dénia aged 14, he wanted to be a DJ. Today, he is more than happy to compare his work to his one-time dream job: “What the two professions have in common is the idea of transforming something. A DJ makes music from individual sounds, while a chef takes organic raw ingredients and turns them into a culinary experience.” Luckily for us, the gourmet side of him won out.

But it is not only the story of the Quique Dacosta Restaurante, which has been named amongst ‘The World’s 50 Best Restaurants’ during the last years, that is extraordinary: wherever possible, the Michelin-starred chef uses locally sourced produce from within 75 km of his restaurant on Spain’s Costa Blanca. Rather than restricting Dacosta, this has the opposite effect, creating an outlet for his endless curiosity, his passion for research and his creativity: all of the character traits that sing out from his dishes.

Dacosta’s style is all about pushing boundaries. He and his team push flavour, concept and technique to the very limits of what is possible, finding individual nuances in each. What results is a culinary language that is unmistakeably the mark of a chef at the top of his game.

The self-taught chef’s menus consist of upwards of 30 dishes, delicate masterpieces that represent the diversity of the different regions of Spain. Culture, tradition, flavour and story-telling are all brought together to form his minimalist dishes. And his philosophy has remained the same for more than 15 years: high-quality produce, perfect craftsmanship and respect for nature. This has given birth to creations such as tea of mantis shrimp and leaves of artichoke from Vega Baja, and langoustines on the grill, green curry avocado and corn. But named as one of Spain’s 25 most elegant men, Dacosta’s fame extends beyond the walls of his kitchen.

Visitors to the Valencia Museum of Illustration and Modernity in 2015 were able to experience a very special exhibition, as Dacosta had depicted there the long road he had taken to find his contemporary, Mediterranean style. Not to mention his long-established career as a popular author, with five books to his name.