From March 2015, The Club at Café Royal will be launching ‘The Domino Effect’, a series of international guest chef collaborations, starting with Chef Paco Roncero.

Created to celebrate Café Royal’s 150th anniversary as a London landmark this year, the series will see a number of high profile international chefs collaborations in the newly launched Domino Room restaurant. ‘TheDominoEffect’ will launch on18 March 2015, when renowned two-Michelin-starred Spanish chef Paco Roncero, will be collaborating with Café Royal’s executive chef Andrew Turner, to create a special seven-course tasting menu. The menu, served in theDominoRoom, will be available to the public to experience for a limited period, as well as Club members.

The lineup of guest chefs is growing fast with The Costardi Brothers of Milan continuing ‘TheDominoEffect’ in Spring 2015. TheDominoRoom is part of the hotel’s Private Member’s Club offering fine dining to Club members and hotel residents. Returned to its original glory, theDominoRoom boasts stunning and beautifully restored cartouche and decadent artwork.

Paco Roncero is one of the leading representatives of avant-garde Spanish cuisine, not just within Spain but also internationally. He is currently the executive chef and director of the Casino de Madrid and its two-Michelin-starred restaurant La Terraza del Casino.

In 2014, Roncero famously opened Sublimotion, the most advanced and innovative restaurant ever imagined which is located at the Hard Rock Hotel in Ibiza, the first hotel in Europe by the famous brand. Sublimotion caters for just 12 guests per service, and is equipped with a room surrounded by 360º of projecting screens and state of the art systems to create chromatic and aromatic environments, control the room´s humidity and temperature and offer specific music or sounds to offer guests a completely unique experience.

Paco Roncero is also executive chef of restaurant Barbarossa by Paco Roncero, in Shanghai ; of Versión Original by Paco Roncero in Bogota; gastro-bars Estado Puro in Madrid, Ibiza and Shanghai; and of the gastronomic multi-space Sinergias in Platea Madrid. 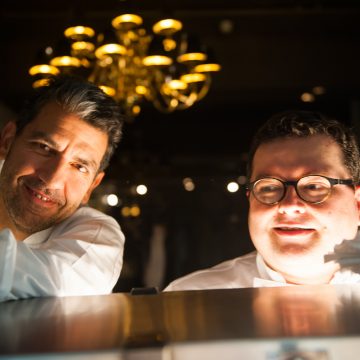 Fresh seafood is always guaranteed to please, especially with this tasty recipe from Hotel Cafe Royal, London. Give it a try and enjoy…

Aurelio Morales, the rising star of molecular gastronomy and pupil of Michelin greats, Ferran Adrià and Paco Perez, is bringing his extraordinary dishes in London for the next month as part of a chef’s takeover series. FOUR speaks to Aurelio about what is next for this talented young chef.