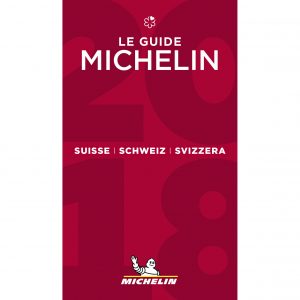 With 118 Michelin-starred restaurants in the MICHELIN Guide Switzerland 2018, an increase of 40% in ten years, Switzerland confirms the vitality of its gastronomy.

Michelin has unveiled the new MICHELIN guide Switzerland 2018, which has a total of 118 Michelin-starred restaurants.

“The standard of Swiss cuisine continues to be particularly high: Switzerland is still the country with the most Michelin-starred restaurants per capita,” says Michael ELLIS, International Director in charge of the MICHELIN guides. “In less than ten years, the quality of the gastronomy has steadily improved, with the number of star-rated restaurants increasing by 40% between 2008 and today“.

All the three-star restaurants in the previous selection retain their awards this year: B. Violier – Restaurant de l’Hôtel de Ville in Crissier, Schauenstein in Fürstenau and the Cheval Blanc by Peter Knogl.

This year’s new selection in the MICHELIN guide awarded Einstein Gourmet in St. Galle two stars, where chefs Sebastian Zier and Moses Ceylan, both from Germany, serve a creative cuisine that is full of flavour in a sophisticated setting overlooking the city. The Taverne zum Schäfli, housed in a lovely half-timbered house in Wigoltingen, in the Canton of Thurgau, has also been awarded two stars: taking over from his parents only two years ago, the young chef Christian Kuchler offers high quality remarkably precise cuisine, in which every dish is put together with both finesse and creativity.

Fourteen new restaurants have been awarded one star in the MICHELIN guide selection for 2018, including The Japanese Restaurant, located in the hotel The Chedi in Andermatt (UR) serving authentic Japanese dishes, and the IGNIV by Andreas Caminada restaurant in St. Moritz. Chef Andréas Caminada, whose Schauenstein restaurant has three stars, has expanded into St Moritz with the restaurant concept that already earned him a star the year before in Bad Ragaz: a cuisine rich in flavours with dishes to share in a relaxed setting. Locanda Barbarossa in Ascona (TI), Löwen – Apriori in Bubikon (ZH), Tosca in Geneva, La Table du 7 located in La Chaumière by Serge Labrosse in Geneva / Troinex, Stiva Veglia in Ilanz / Schnaus (GR), Weiss Kreuz in Malans (GR), Café Berra in Monthey-Choëx (VS), Regina Montium in Rigi Kaltbad (LU), Die Rose in Rüschlikon (ZH), Table de Mary in Yverdon-les-Bains / Cheseaux (VD) and Rigiblick in Zurich also receive one star in the new selection.

The Principality of Liechtenstein hosts its second MICHELIN-starred restaurant with Torkel, a historic house among the vineyards offering classic cuisine.

In total, the MICHELIN guide Switzerland now has 96 one-star restaurants.

Finally, evidence of the increasing success of the Bib Gourmand, which is increasingly coveted by chefs and is popular with the public too, the MICHELIN guide has 153 Bib Gourmand establishments, 30 of which are new this year – double the number ten years ago! Symbolized by a representation of Bibendum (Micheline Man), the Bib Gourmand rewards establishments serving a full high quality menu (starter, main course, dessert) for a maximum of 70 Swiss Francs.

Because simply being selected for the MICHELIN guide is in itself synonymous with quality, a new distinction has been included in the MICHELIN guide Switzerland 2018 this year: the Assiette Michelin (Michelin Plate). Symbolized by a plate and cutlery, this award is attributed by inspectors to restaurants in the guide that have neither a Bib Gourmand nor a star. It means “quality produce and skilful chef: quite simply a good meal”. The MICHELIN guide Switzerland 2018 will be available from 13 October for 33.00 Swiss francs in Switzerland, €29.95 in Germany and €30.80 in Austria. This new selection lists a total of 931 restaurants and 514 hotels in all comfort and price categories, including: