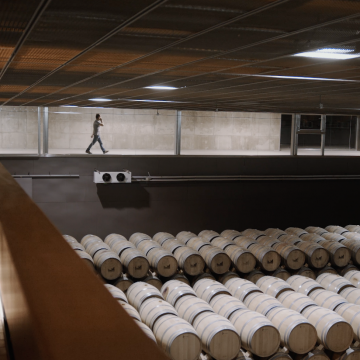 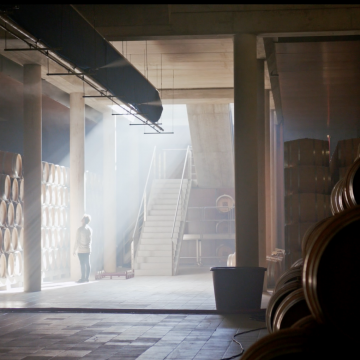 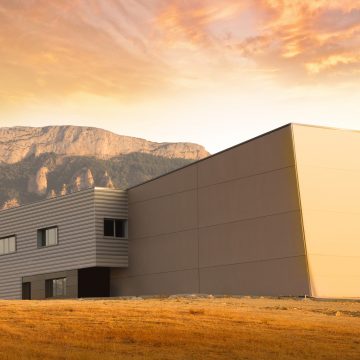 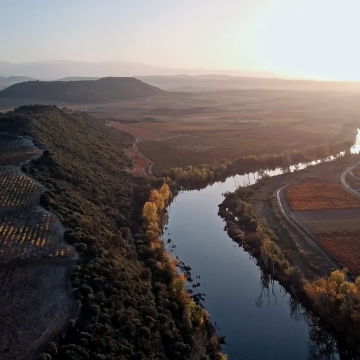 Javier Ruiz de Galarreta founded the Araex group 20 years ago, bringing together nine small and medium wineries from the Rioja Alavesa region. In just a few years, Araex became one of the main drivers of the production and export of the entire qualified designation of origin. The Alava-born entrepreneur recognised the signs of his age and created Spanish Fine Wines in 2001, a second union that grouped other wineries from other respected Spanish regions.

Today, Javier Ruiz de Galarreta continues to create new wine ventures, characterised by quality, global projection and respect to the roots and identity of Spanish vineyards. From the production of prestigious wines to the organisation of tasting panels, Araex-Spanish Fine Wines Group’s activities stand out for their excellence and vision. Among their latest initiatives the current collaboration with world renowned winemaker Michel Rolland is especially remarkable.

It all started with Araex. Where did the idea come from?

I read the report of an international consultant on the corporate structure of the wine sector in DOCa. Rioja, which concluded that the sector was too fragmented to effectively affect the markets. So I decided to create the Rioja Alavesa Export Group, whose acronym is Araex, an instrument which was dynamic and large enough to enter international markets.

Had you worked with wine before founding Araex?

The thesis of my Master’s Degree in Business Administration dealt with the marketing of Rioja wine in the UK market. That was my first in depth contact with the world of wine. I found it fascinating, especially because the Rioja Alavesa region, which is the subregion that is closest to my hometown, was starting to reach its historic peak and expertise.

Why did you limit to this small subregion of La Rioja?

I received initial support from the Chamber of Commerce and Industry of Alava. Logically their condition was that my project created an export group that focused on Basque wineries of the Rioja Alavesa region. I also found it very challenging to succeed in international markets with the wines from this subregion, which was relatively unknown at the time. And the fact is that, until the early 1980s, the great traditional producers were all located south of the Ebro River, in the Rioja Alta region, and monopolised exports.

What makes the area so special in your opinion?

I quickly realised that the Alava region of the DOCa. Rioja was perfect for my project. The Rioja Alavesa region has a great potential for quality. The best soils for growing Tempranillo in the world are right here. Therefore, to exploit this potential, I brought together a group of nine small and medium very different producers, to create a portfolio that was as broad and as individual as possible. It seemed that the international wine industry was waiting for the arrival of the wines from Rioja Alavesa. Our export engine started with this potential, both in the European markets as in the United States, although it has been slower in the latter.

Was it difficult at first to break through to the big and powerful La Rioja names?

On the contrary, the fact that the Rioja Alavesa region had different structures, small and medium wineries, opened the doors for us. There were many import companies in search of individual wines, from family business, as they had done in France and Germany. And that was exactly what we could offer: the singularity and the expression of the terroir of the vines located in the Rioja Alavesa subregion.

When did you decide to create a second support pillar?

Shortly after the constitution of Araex, in 1993 I started to think about diversifying our offer. Thus, in 2001, I created a second group of wineries called Spanish Fine Wines. This group allowed us to optimise our structure and design a comprehensive global Spain-wide portfolio with a specific positioning strategy for each of the Rioja Alavesa brands: Labastida, Montebuena, Baigorri, Luis Cañas, Amaren, Altos R, Heredad de Baroja and Lar de Paula.

Which of these growing regions have developed better in general?

We were amazed that the Albariño was easier to export than Rueda whites. We have had no problems when long-term marketing our superpremium Albariños without lowering our prices, however the Rueda whites have always suffered from outside pressure on their prices. The boom of the Rueda region helped their marketing at the beginning, but later the prices started to decline due to the rapid growth in supply.

Meanwhile, we have managed to solidly position our Rueda wines in the press and the market based on a enormous branding effort. This year we will manage to output 700,000 bottles of Rueda, representing growth of 30%.

What does it look like for the Spanish Fine Wines reds?

Toro has worked well from the beginning, however, the case of Ribera del Duero has been more difficult. In the middle of the last decade, it was clear that Ribera del Duero was not as strong as we had thought, compared to other collective brands. In that region, only a few well known brands stood out. The Ribera del Duero wines are traded at a high price, forcing many growers to take a step back. Today, prices are structured more evenly, which significantly improved sales of this product, especially in Central Europe, the U.S. and Mexico.

With Pago de Cirsus you have also included a Premium Navarre wine that will soon receive the Vino de Pago qualifi cation.

Navarre is a special case. The wines generally work well, especially in Old World countries where, in a sense, they occupy the place of the more modern wines of the New World. This is justified with international grape varieties used in the region of Navarre. The cuvées of Spanish and French varieties are the norm, the wines are generally considered modern, i.e. ripe fruit and good concentration. The region needed more dynamic brands to achieve greater repercussion as a growing area. So we focused on the individual branding of Pago de Cirsus, a winery that only uses their proprietary harvests.

How will you guarantee the future success in the marketing of Rioja wines?

We must flee from standardisation. Rioja has a strong image. It is the most important collective trademark in Spain. And that, paradoxically, is also the problem. Our task is to manage the offer by segmenting it, because we cannot enter the markets today with a collective trademark without providing a segmentation by different levels.

Isn’t it necessary to address the origin and type of wine in a more specific and accurate way?

That is included in the segmentation I was referring to. Why do small and medium enterprises speak so little about the terroir or growing region where their raw materials are from? I think the slogan of Rioja’s promotional campaign, “A thousand and one Riojas” is really good. There is not just one Rioja, but many Riojas that together present a wonderful wine list. It isn’t difficult to get achieve differentiated positioning, but it requires more effort and dedication; we need to think more tactically.

If we take a general look at the Spanish wine sector, how do you see its export potential?

I think it has a greater potential as an exporter of wine. Spain has always been valued for its export volume, not for the quality of its products. For a producer country, the price-value ratio is still excessively good. And I used the word “excessively” on purpose, because the prices of many Spanish wines are too competitive compared to similar products from other countries. But that is changing now. Markets are accepting a slow increase in the prices of Spanish wines. In the future, the growth of Spanish wines will be achieved through the value of the product, not through volume. But that requires a better positioning of the wines.

What can we expect from The Grand Wines?

Araex and Spanish Fine Wines will market The Grand Wines’ products: Villa Conchi cavas, which brings together five types of cava; a Vino de la Tierra (quality wine) under the Gran Sello trademark; and the R&G project, which stands for Rolland & Galarreta. R&G has given me the opportunity to work with Michel Rolland, the best known wine producer in the world as a fully integrated partner, not only as a consultant, and produce a wine from each of the three growing regions, Ribera del Duero, Rioja and Rueda, under his direction. Last October, our triplet produced 800,000 bottles. About 450,000 are Rioja Alavesa R&G. This is clearly an ambitious volume, but the prospects are excellent, especially because these premium wines have an unbeatable price-value ratio. R&G will soon become one of the leading Spanish brands in the premium wines market.

What is Gran Sello?

It is a brand with three lines of regional wines from Castilla-La Mancha, produced at Bodegas Muñoz. The three qualities are Clásico, Gran Colección and Edition Limitada (Classic, Great Collection and Limited Edition). Together, these wines have their own marketing style. They are accessible wines with a light structure and easy to drink.

What prompted you to jump into the cava sector?

We simply saw the demand. The Scandinavian markets, China and Russia have a true and continued demand for cava, so we decided to respond accordingly

What type of cava are Villa Conchi’s sparkling wines?

We opted for fresh and light cavas, which is what the international demand requests. We did not want a very vinous-style cava, we have left that to other producers. The base of the white cuvées are the three traditional varieties of cava, with a touch of Chardonnay. It was also important to be careful to not go beyond Brut. We sell Brut Nature, Extra Brut and Brut. With Rosé we also focused on the international taste. Obviously, it’s a pink cava, but it’s not too intense. With the cava it is important to achieve an above average positioning. That, for us, is a great challenge. We want to reach one million bottles by 2014.

What is the secret to cavas’ success?

Cava, as a product, has many advantages. It is easily understood and its lightness makes it enjoyable. We must not forget that the base wines cannot be chaptalised in the production of cava. On average, cavas are below 12% alcohol, which really pleases the consumer and is completely in-style.

However, it is very important to note that it is a sparkling wine of the highest quality that must be preserved with yeast for nine months in the bottle by legal prescription. This is a very valuable product with an extremely good price-value ratio.

Looking at the group as a whole, what does the future look like?

With the changes promoted in recent years, Araex-Spanish Fine Wines has planned a major development until 2016. The international market is becoming more agile, faster and, above all, more demanding, which is why we have a very diverse portfolio to react to a rapidly changing demand. Our wineries offer the best quality for both on-trade and off-trade strategies.

Given the high level of specialisation of our producers, we can also cater to certain premium market niches. Our perception is that this is a stage marked by the ability to respond to the needs of international markets and guarantee optimal quality for all sales channels.