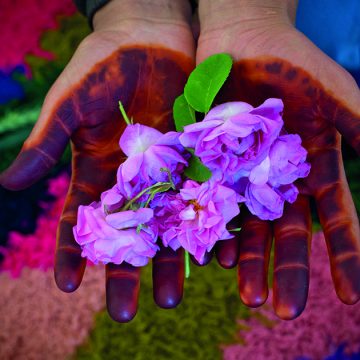 Fat of the land | Valley of the roses

Arriving in Marrakech in early May, I was greeted by a riot of roses. Colours cascaded from deep carmine red to the merest blush of pink, punctuated by acid-drop yellow and attention seeking orange—never a favourite. These were blowsy blooms that grow tall and proud on upright stems with their fat and juicy flowering heads.

So far, so good: after all, I had come to research roses and their importance and use in Moroccan food. And so what if these roses were rather municipal, very “hybrid tea”? At least here are the roses I thought as we flashed passed well-tended beds lining the main road into town and onto the Palmeraie. When I arrived at Dar Ayniwen, a charmingly eccentric hotel converted from the family villa and set in its own lush tropical gardens, even my bed and sunken bath were scattered with rose petals. How wrong could I be?

The following morning I set off to the souk, Marrakesh’s labyrinth of a market. The deeper you penetrate its narrow, crowded alleys, the more chaotic and noisier it becomes. Whether alone or with a guide, be prepared to be constantly accosted with offers of sweet mint tea, the best babouche (slippers) and goodness knows what else—carpets, tagines, baskets, leather bags—need I go on? I was on a mission to find my culinary roses, I was told the Spice Market was the place to start and I was not to be deterred.

Long before it finally revealed itself, the air was pricked with the bittersweet scent of skinjber (ginger) mixed with karfa (cinnamon), naffa (aniseed) and other familiar spices. The stalls were lovingly laid out in rows of ground spices, smooth-sided and piled into impressive peaks, qalb dyal sukkar (cones of pressed sugar) and baskets of unnamed and—to me—unknown twigs, rocks, branches and leaves, each one an essential part of the spice treasury of Moroccan flavours.

Centre stage, there were the tiny dried baby rose flower heads, an arresting shocking pink, some tightly budded, others with petals spilling out. Pressing them lightly between my forefinger and thumb, they released an overwhelmingly heady scent—there was no doubt, these are the treasures I was after. Whether mixed with—according to some—41 different spices and ground for Ras el hanout, the spice mix so liberally used in Berber cooking or distilled into a pervasively perfumed rosewater to scent sweetmeats and sugared treats, these pungent roses are as important to Moroccan food as parsley is in Britain.

Back in my hotel, I was treated to a rose-based cookery demonstration. Rabbit stuffed with pears and almonds was lightly charged with Ras el hanout and finished with rosewater for an astonishing depth of flavour, and Chbakia, a popular sweet of Morocco, made from a rose-scented dough twisted into rose shapes and then deep-fried and scattered with sesame seeds. As I tucked in during my poolside candlelit dinner, I wondered what my travels the following day would reveal.

After breakfast, I was collected by Mustapha, resplendent in his traditional Berber robes, but driving a very modern 4×4, who would guide me into the Valley of the Roses where my roses—the heavily perfumed rosa × damascena or damask rose—flourish. The drive was spectacular; twisting roads climbed up past ruined kasbahs, the traditional houses with four towers where if you are lucky storks will stop by and build their extraordinary nests, and steep valleys scooped out of glinting, grey rocks. We stopped briefly at a salt mine to break off lumps of rock salt and then continued towards the snow-capped mountains of the High Atlas.

It was pretty obvious when I had finally arrived in rose land as suddenly everything from shop fronts to signs, shutters and roadside umbrellas turned rose pink. Boys lined the roads selling rose-wrapped hearts on a string, even the roundabout art in El Kelaa M’Gouna, rose-city central, had gone rose mad. Huge roses, fashioned out of a gaudy pink plastic, adorned their centres.

Damask roses flower here in April and May and apparently up to 4,000 tons of rose petals are harvested annually from the 4,200km of planted roses. As well as their use in food, they are distilled for perfume and traditional medicines. If you are expecting to find huge fields of roses, similar to the vast expanse of tulip fields you see in Holland, you will be disappointed.

Agriculture is still practiced along traditional lines with the land, divided into small fields owned and worked hard by local families. It lies in fertile strips along the banks of the rivers M’Goun and Dades that make up the Valley of the Roses and towered over by the foothills of the High Atlas. Fed by the mountain snows, the rivers water these narrow, lush plains so the farmers can count on three harvests a year. Such crops as maize, various animal feeds, vegetables or trees that, depending how high up is their land, produce walnuts, figs, apricots, peaches or olives make up the annual cycle.

Roses, an important cash crop, are still grown in the traditional way. Planted around the edges of the fields and left unpruned, they grow tall and bushy over the years. The flowers, surprisingly small and unimpressive were it not for their vibrant colour, lurk shyly behind the leaves. Picked in the morning before the sun can scorch them, they are then laid out to dry or taken in great haste—as the fresher the flower, the higher the content of their volatile oils— to the distilleries in town. They may be huge factories supplying the likes of Chanel or other famous perfumiers to small craft distilleries with traditional shining copper stills were anyone can buy the highly prized essence or oil of roses to diluted rose water and an astonishing range of lurid pink soaps, creams, lotions and potions.

It is spectacular countryside. Staying in Dar Jnan Tiouira, Mustapha’s seven-roomed kasbah built by himself and his brothers using old-fashioned materials and techniques, waking to the sun bursting over the hills, walking in the fertile fields, eating tagines or visiting souks, was a real joy. As an added bonus, every so often, passing the fields, I would glimpse that vibrant pink, a reminder that here is the heart of Morocco’s rose country.