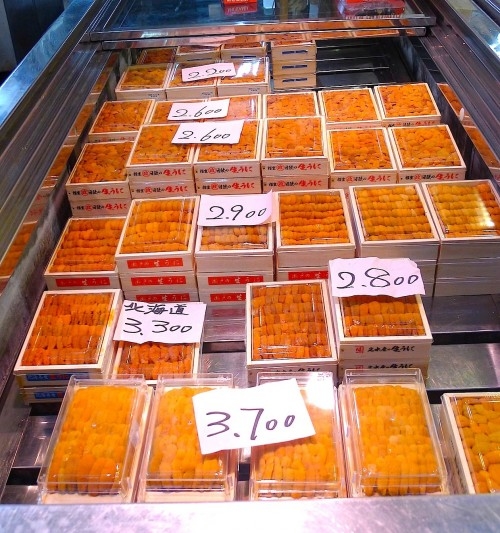 At 7:00am, Tsukiji fish market is seething with activity. Fishmongers bearing sloshing trays of seafood weave precariously through the market’s crammed stalls, sidestepping sushi chefs with wicker shopping baskets, brusquely elbowing past the photo-happy tourists that have managed to sneak by the security guards. Ignoring the chaos, Yoshitaka Ebashi, president of the wholesale company Kaiho, which specialises in shellfish, ties a stack of boxes filled with uni (sea urchin) roe together with a length of twine and attaches an invoice to the parcel. The uni was sourced from Russia, so the price is lower than it would be for the prized Ezo-bafun uni (short-spined sea urchin) from Rishiri Island, in Hokkaido. “The uni season there is summer,” he tells me, explaining that the dates for uni fishing in the different regions of Japan are legally determined. Come mid-June, Ebashi’s shelves will be stocked with orange gold from Hokkaido: a box of Ezo-bafun uni weighing 280-300 grams can sell for hundreds of dollars.

Japan is the world’s biggest consumer of uni, a divisive delicacy that has been catching on with gourmets around the globe. The Japanese love it for its texture—silky and delicate yet creamy—and for its almost ineffable flavour. At its best, the roe (the only edible part of the spiny creatures) is sweet and brimming with umami, laced with a briny note of musky gravitas. At its worst, it can taste like a mouthful of ammonia. The urchins from Rishiri and Shiretoko in Hokkaido taste so good because of the kombu (kelp) that they eat and the pristine waters where they grow.

Of the more than 100 varieties of sea urchins in Japan, only a few kinds are eaten. Bafun uni (a close relative of the short-spined urchin, sometimes referred to unflatteringly as horse-dung sea urchin) and murasaki uni (purple sea urchin) are found all over the country, but aka uni (red sea urchin)—a rare and pricey variety—thrives in the Kyushu region of western Japan. Murasaki uni is the most common species. “Some people prefer it because the taste is very clean,” Ebashi says, flipping open a box of purple urchin roe from Oma, in the northeastern prefecture of Aomori, and laying a fat, golden lobe on the back of my hand. The murasaki uni from Miyagi Prefecture, which feeds on wakame (seaweed) rather than kombu, had a lighter, saltier flavour. The bafun uni from Russia was bright orange, with smaller, rounded lobes that resembled flower petals. “This is similar to the Hokkaido bafun but not as sweet,” Ebashi tells me. It tasted of the sea, with a gentle sweetness that finished on a mildly astringent note. At this time, in mid-April, the ruddier milt from the males is sweeter than the vivid orange eggs of the females, which can be bitter at the end of spring.

Demand for uni has been increasing yearly, along with prices. Part of the reason, speculated a representative at the Japanese Ministry of Agriculture, is the growing popularity of sushi. Hiroyuki Sato, the chef of Michelin-starred Sushi Tokami, says that he always includes uni on the tasting menu at dinnertime because many customers expect it. Although he doesn’t usually serve it at lunch, several guests requested to add at least one piece of uni to their meals when I dined at Tokami on a recent afternoon. “Delicacies like o-toro (fatty tuna) and uni are like main courses in the sushi world,” observed Junichi Onuki, of Isana Sushi Bar. “It makes people feel like they’re having a feast.”

Domestic production, however, has fallen precipitously—down from 26,898 tons in 1977 to 11,679 tons in 2007. Fishing for sea urchin is labour-intensive (they’re either pole caught or hand picked by divers) and unpredictable work. Japan now imports significant amounts of uni, mainly from neighbouring Russia, as the aquatic environment resembles the waters around Hokkaido. Chile, Canada, and the United States are other major sources, but Yoshitaka Ebashi, the shellfish dealer, told me that sea urchin populations abroad have been declining globally. “20 years ago, we got big shipments from Chile, but now we get far less,” he says.

Experts speculate that warmer sea temperatures, which inhibit the growth of kelp forests, and ocean acidification, which weakens the shells of the echinoderms, have played a role. In some areas of Hokkaido, sea otters have crippled uni populations, while the overfishing of predators has led to a sea urchin population boom along the Sanriku coast of northeastern Japan. Though that may sound like a boon for the fishermen in the area, which was devastated after Japan’s 2011 tsunami and earthquake disaster, the opposite is true. The urchins have decimated local kelp forests. With nothing to eat, the uni are unable to develop sufficient quantities of edible roe.

“They’re pests. When you crack them open, they’re empty inside,” explains Brian Takeda, of Norwegian seafood production company Kaston, which has embarked on a project to develop uni aquaculture in northeastern Japan. Initially launched as a goodwill initiative between Norway and Japan after the 2011 earthquake, the plan aims to help local fishermen, who have been suffering economically from low catches, by collecting the unsalable sea urchin, feeding them with specially designed kelp pellets, and then harvesting the roe. The company finished the first year of trials last summer, and Takeda says that the results far exceeded expectations. “The taste and colour was so good, experts couldn’t distinguish the farmed uni from the wild,” he tells me. “This socially and environmentally destructive cost can become an income stream and replenish the kelp forests.”

“It’s a good idea, as long as they’re not using chemicals,” Hiroyuki Sato says, when I tell him about the project. But he pointed out that the trend toward higher prices for uni will continue, nonetheless, making wild sea urchin a rare treat for the wealthy. “What’s important is preserving Japan’s bountiful nature, so we have to find a balance,” he reflects, placing two pieces of bafun and murasaki uni nigiri before me. The roe was intense, with a cool and smooth texture that reminded me of custard. It had been months since I’d eaten uni at a restaurant, and it felt like a feast.