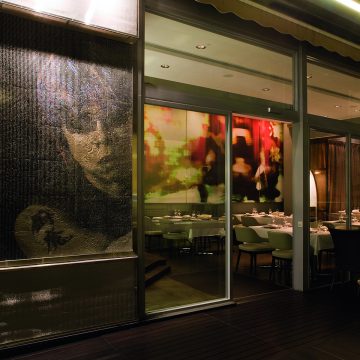 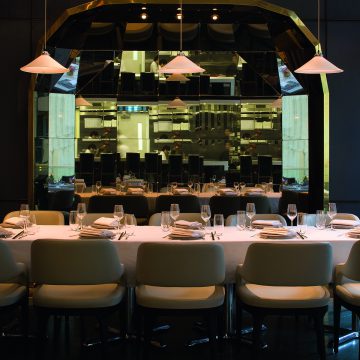 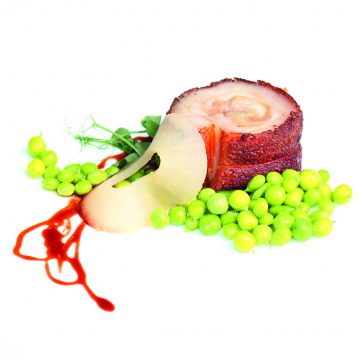 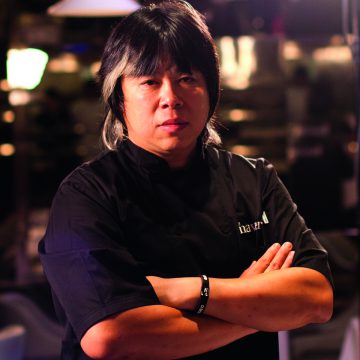 The self-taught chef and recipient of two Michelin stars talks to FOUR about Bo London, his unique moniker and breaking down misconceptions about Chinese cuisine…

Alvin Leung is no stranger to London. Born in the city before moving to Toronto as a child, he studied here, gaining a degree in environmental science. It is no surprise then, that the self-named Demon Chef chose to set up shop here, too with Alvin’s second restaurant, Bo London in Mill Street, Mayfair.
“Right now, London is one of the eating capitals of the world. The S.Pellegrino World’s 50 Best originates in London and you have a lot of talented chefs wanting to move here. It was very natural for me to open a restaurant in London.

“Not only the food, but the fashion and the music. There is a lot of creative energy in London and I want to absorb as much of that as I can.”

Taking almost four years to plan, Bo London is similar to Bo Innovation, with Leung reportedly having spent a cool £1 million on the site and interior fit out. “The DNA, the way I cook and my philosophy will be the same [as Bo Innovation], but the dishes are different.

“I utilise what produce I can find locally. If I was to open a restaurant in France or elsewhere in China, that is exactly what I would do, take my philosophy to that place but adapt to the locality.”

Taking an unorthodox route into the kitchen, Alvin’s first establishment, Bo Innovation, opened in Hong Kong in 2005, after he was encouraged to take over a 25-seat restaurant following the departure of its previous chef. With a passion for cooking, which up until that point had been reserved for friends and family, Alvin Leung’s style of X-treme Chinese was born.

“X-treme Chinese is a term I invented. I didn’t want to be in the category of modern, fusion, or contemporary cuisine.” Alvin explains: “Since none of these labels really have a true meaning, I thought I might as well put my own term out there that I can define.”

Alvin describes X-treme Chinese as a style of cooking that combines centuries-old recipes with modern cooking techniques. His aim; to break down misconceptions of traditional regional Chinese dishes. “X-treme means to take you to that boundary where you are comfortable, but excited. The ‘X’ stands for exotic, experience and sometimes expensive.

“There are misconceptions about Chinese cuisine because Chinese food is divided into eight regions; Cantonese, Sichuan, which is spicy; Hakka, which is very rustic and so on. Since the cuisine varies between each province, from spicy to steamed, cold to hot, as dishes are exported and introduced into other countries, they become a hybrid of interpretations.”

Alvin explains how different regions and countries enhance and change a traditional Chinese dish to suit their own needs and local ingredients. “It’s all about the evolution of cuisine. For example, the way food is seasoned is different in different countries. Hakka, in Chinese cuisine, isn’t spicy. But in Calcutta in India, they make a style of Hakka Chinese food that is spicy because that’s how they season food.”

Pushing the boundaries of molecular gastronomy had earned Alvin two Michelin stars by 2008, the only independent restaurant in Hong Kong to be recognised at this level. As well as the stars, Alvin earned himself a celebrity status and was being billed as the rock and roll chef in Asia. Largely down to his appearance, with his tinted hair, tattoos and black sleeveless chefs’ uniform, it wasn’t a label Alvin felt comfortable with, and so he created his own moniker, the Demon Chef. “It’s a name I gave myself because I was being called the Rock and Roll Chef or the God Chef. In Asia, you get to a certain status and they give you this title, which is a bit too righteous for me. It’s a compliment, but it wasn’t me. So rather than have a nickname given to me, I created my own.

“In Chinese it is a bit more poetic sounding [than in English] and a better description of me. It comes from the Greek word ‘Daimôn’ meaning good-spirited, so there’s nothing sinister about it.”

The former engineer reveals that through his cooking, he wants to play with his guests’ minds. “There is a lot of innovation, creative energy and concentration that takes place in the kitchen. The mind, which is the most important sense, is what I want to play with. Everything is connected to the mind. It is where you feel comfort, pain, pleasure. Of course, as a chef, the sense that I always prioritise is taste. For a dish to last the test of time, the most important sense has to be taste.

“An engineer thinks with a lot of logic—we are very systematic and practical people. We then go deeper and explore the mind, pushing the boundaries and stimulating all of the senses.”

Alvin has always been confident that the food and décor of Bo London works in harmony with each other, neither one over taking the other.

“You want the experience to be the ultimate experience. It’s not just the food but the comfort of the restaurant and the surroundings are very important, too. Having said that, the restaurant should always complement the food and never over take it. It’s all about the yin and yang.

Bo London demonstrates Alvin’s ability to surprise his guests, highlighting not only favourite dishes from Bo Innovation in Hong Kong, but also debuting new culinary creations inspired by Britain. Not one to shy away from controversy, Alvin also includes his renowned “Sex on the Beach” dish on the menu in London. Initially created to raise awareness of HIV and AIDS in Hong Kong, the dish features an edible “used condom”. The dish will be offered at an £8 supplement to the main menu, with all proceeds going directly to the Elton John AIDS Foundation.

Apart from the main dining area which seats 32 guests, the ground floor interior of Bo London accommodates ten guests in an entrance bar, which is open with lunch service and serve selected dim sum dishes throughout the day. Two semi-private dining areas are available within the main room’s design, one of which is a Chef’s Table seating up to eight guests, offering diners a glimpse behind the scenes.

A more intimate setting is available on the lower ground with a private dining room – seating 20 guests – utilising subtle lighting and original finishes to provide guests with a personal space to savour the theatre of the kitchen. The interior takes inspiration from the four natural elements – fire, air, water and earth. As with the cuisine, this traditional approach to the design has been modernised for a more urban feel. The natural warmth of wood will complement the textures of smooth marble, coarse-cut granite and hand crafted metal work. The result is a sleek, calming space offering the perfect backdrop to enjoy the excitement of the menu. The lower ground adds an extra dimension utilising shadow and light, taking inspiration from Hong Kong’s Wan Chai district skyline at night.

Welsh chef, Gareth Ward, gives us a taste of his award-winning restaurant at Ynyshir Halls with this recipe for crab and turnip…Yum!