Ferran Adrià’s Spanish restaurant and former ‘best restaurant in the world’ to sell its vast collection of fine wines at auction. FOUR explores…

The auctions will be held 3 April in Hong Kong and 26 April in New York through the Sotheby’s auction house. 8,807 bottles will be on sale, all of which come from the cellar of the former three-star Michelin restaurant.

The collection was created by Adrià’s business partner Juli Somler. The cellar includes full cases of bottles and magnums of Chateau Latour 2005 and three bottles of Domaine de la Romanèe Conti, Romanèe Conti 1990, which have a pre-sale estimate up to $47,500 (£29,670).

Also included in the lot are 2,000 bottles of Spanish wine, including six vintages of Vega Sicilia “Unico” from 1987 to 1996, and 415 bottles of Chateau de Beaucastel.

Adria was head chef at the elBulli restaurant for 27 years, working his magic in the Catalonian kitchen. The restaurant was closed down last year and the elBulli foundation will be replacing it next year. The ‘creativity centre’ will be offering development programmes to budding chefs and seeks to develop gastronomy to new levels.Some of the wines in the sale 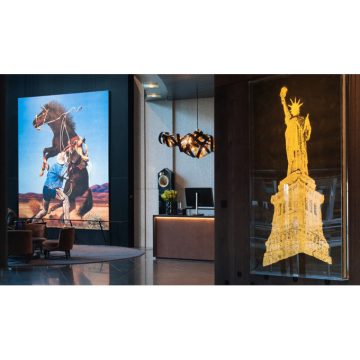 Helping Haiti was the focus of the Andrea Bocelli Foundation’s latest benefit in which €45,000 was raised for the charity…

The Ivy sheds its furnishings

Iconic London restaurant The Ivy auctioned off some its furniture, art and artefacts for more than £1m for charity.