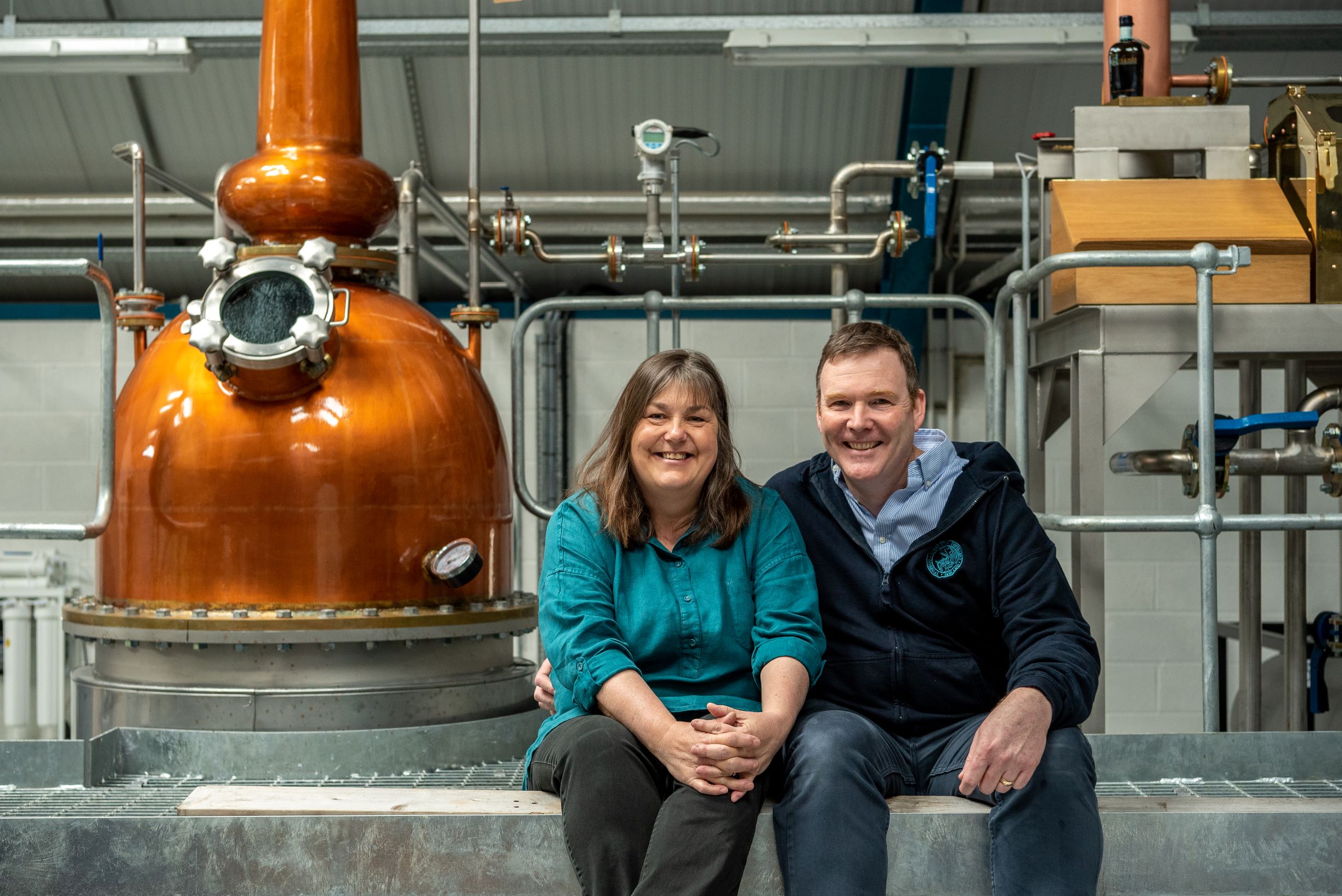 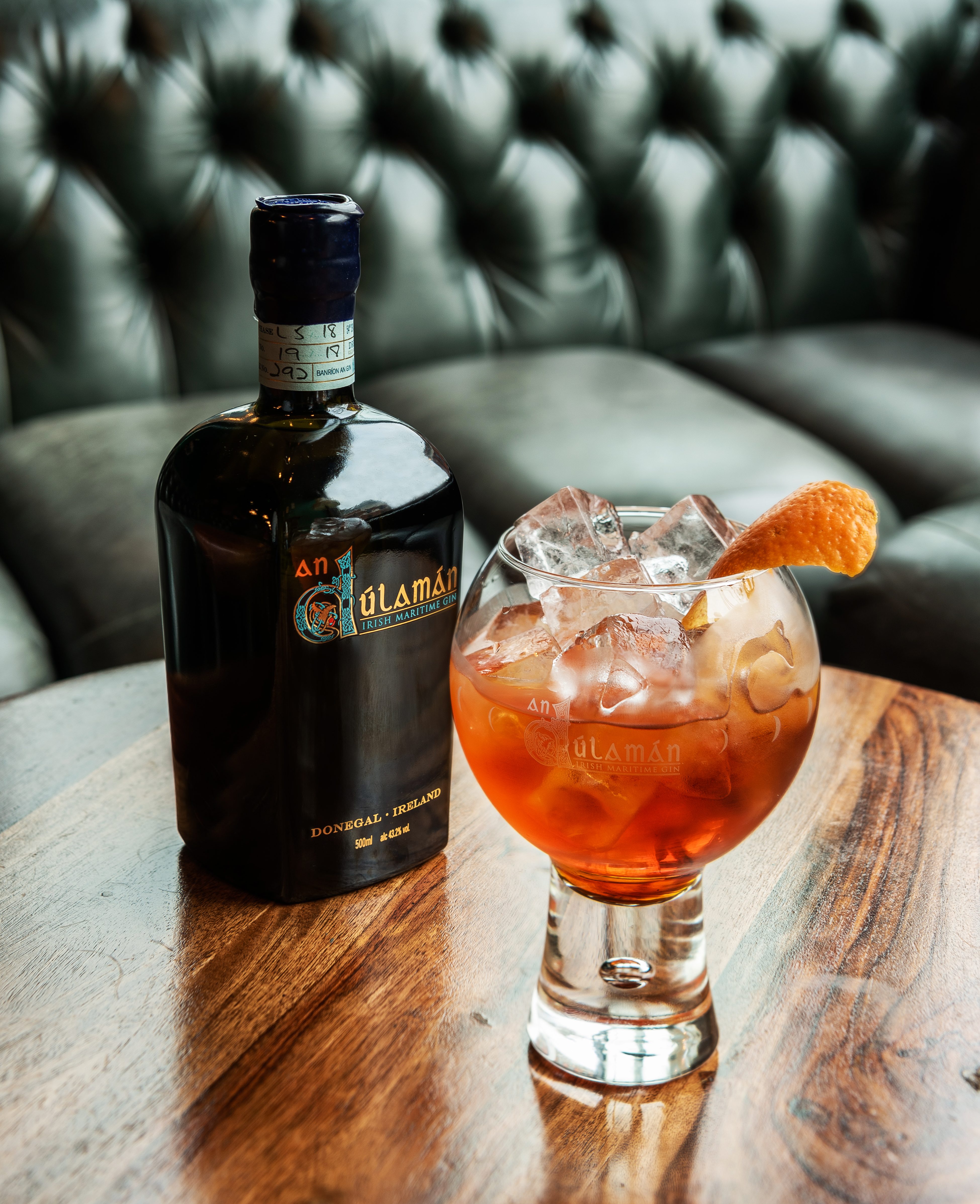 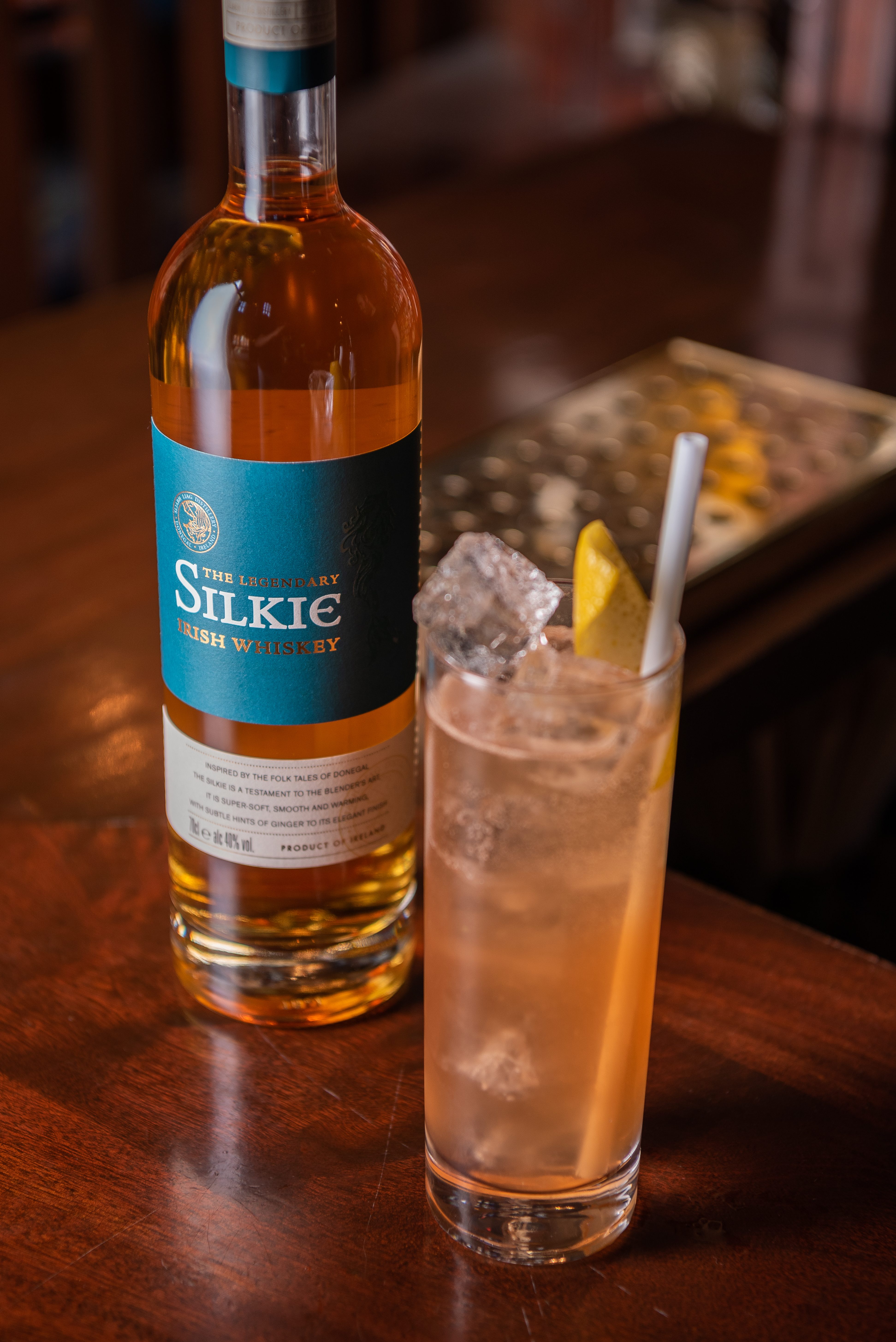 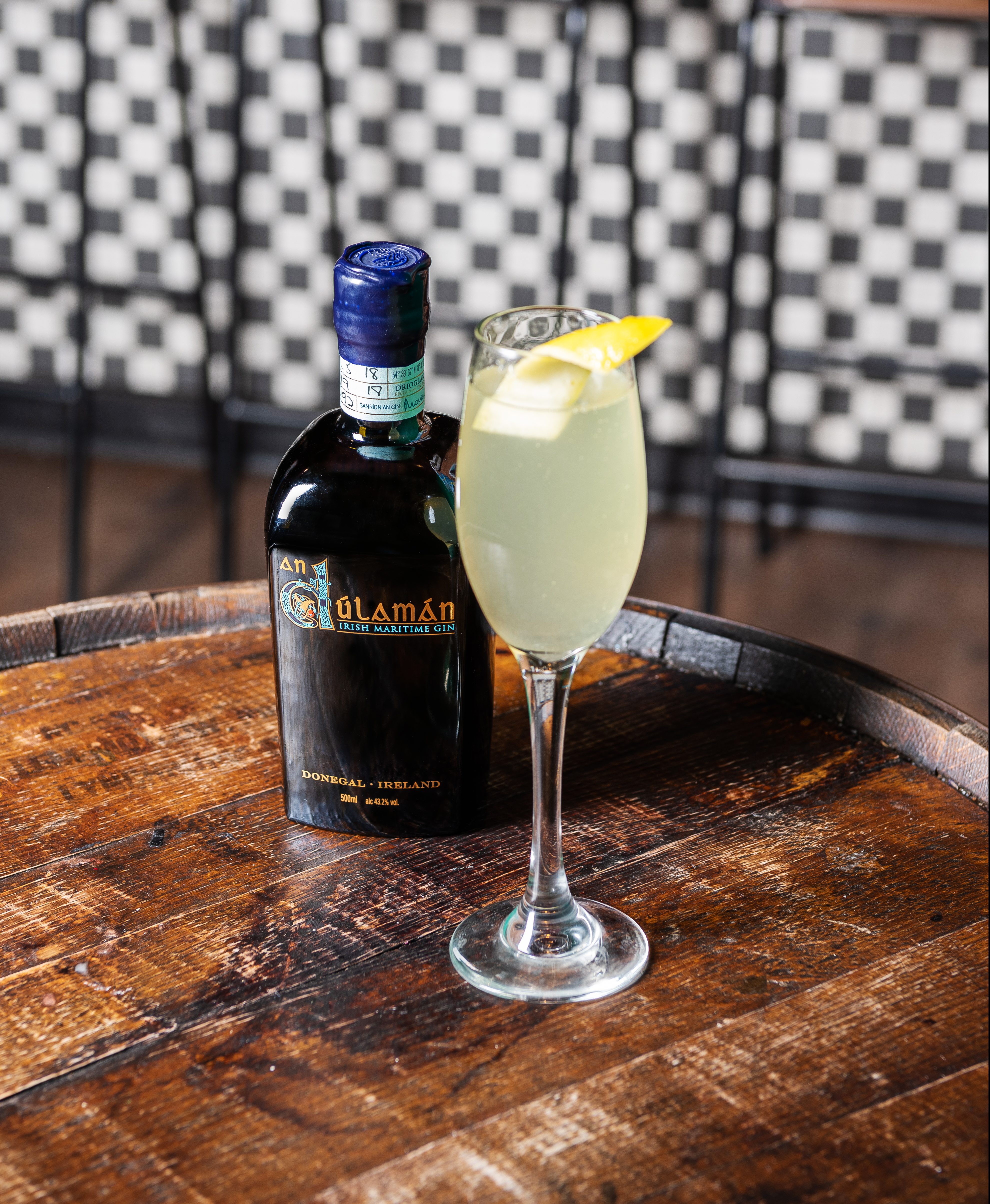 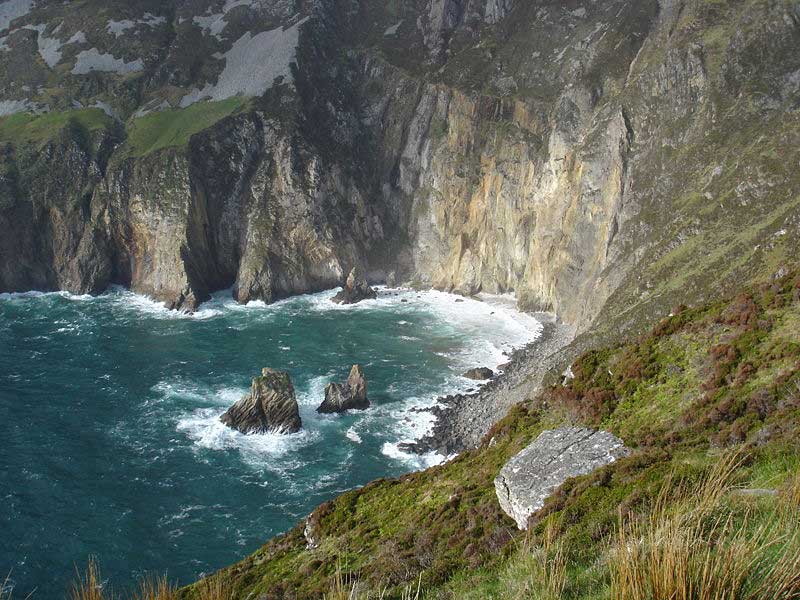 Using the unique terroir of the Sliabh Liag mountain on Ireland’s wild Atlantic Coast as their muse, Moira and James Doherty craft the highest-quality spirits as an ode to Donegal’s distilling heritage, capturing the essence of the Sliabh Liag peninsula in every droplet. FOUR catches up with co-owner, James, to find out more about Sliabh Liag Distillery…

Can you tell us a bit about the history of Sliabh Liag Distillers?

Moira and I came back to Donegal in 2014 to fulfill our dream of building a whiskey and gin distillery and “reclaiming the distilling heritage of Donegal”. My grandad was a renowned local Poitín maker and the Sliabh Liag peninsula has a rich illicit distilling heritage.

These undertakings are always a team effort and other than Moira and I, our founding team includes James Keith with his strong background in SME’s and two former colleagues from my time at SABMiller – John Davidson and Domenic De Lorenzo. First we sourced whiskeys that are blended together to a super soft style called the Silkie Irish Whiskey. Then we built our Gin Distillery on the boundary between Kilcar and Carrick villages and released An Dúlamán Irish Maritime Gin in October 2017. We have a couple of smaller releases to come but the major focus currently is the main whiskey distillery that we have designed and should be building in the latter part of the year and be distilling at the end of 2020.

How did you find your way into the world of spirit production?

I have been in the industry for about 20 years and a few years ago while picking seaweed, Moira asked me if anyone had used seaweed in alcohol. At that time no one had and this was the moment of inspiration for An Dúlamán. We built the whiskey ideas similarly and 5 years ago we decided to leave the corporate world in Hong Kong to head “home” on the adventure to build Sliabh Liag Distillers.

What do you most enjoy about working as a distiller in the drinks business?

We are self-taught and have found the craft distillers to be a collegiate group. If you need advice you can readily pick up the phone to someone who will help. Moira and I get to work together, which for 20 years hasn’t been the case.

The business has grown rapidly, we don’t get to walk on the beach as much as we promised ourselves, but that said, we meet new people all the time who love our story and want to talk about our brands. Sharing the journey and promoting Donegal is always a pleasure.

What do you think was one of the biggest surprises or lessons you learned along the way?

I suppose the first lesson is that it takes twice as long and costs twice as much as you think it would and when you put yourself in the arena as we have done, it can be quite scary. It’s immensely rewarding to see the positive reactions from people who like what you do – we even record some of those comments on the neck tag. I think for Moira, being an identical twin, she has been overwhelmed at how she has transformed from being “the other one” to seeing people greet her twin sister Joanne as if she was Moira and Joanne saying “no, I’m the other one.”

What interesting trends/themes are going on in the world of distilling?

The distilling world is growing and changing so fast. It seems that people are finding different ways of telling their stories, for us as scatterlings who have come “home” it’s about telling our story of the Donegal Gaeltacht, the land of my parents.

In terms of themes, the trend toward gin liqueurs that only use the terms Gin because it is an easy sell puts the whole category at risk and should be clamped down on, but the search for the novel and the interesting in botanicals and their processing should be encouraged.

From an Irish whiskey perspective, I want to see a functioning wholesale market that will mean more whiskeys are available to create interesting blends that will see a decline in the cask finishing that is going on which for me isn’t that exciting.

We are blessed to live in an area of outstanding beauty and it’s really only being understood now how terroir can influence Irish whiskey. The synergy between soil, sea, climate, varietals and topography influences everything and a Donegal terroir that includes the blue-green of the wild Atlantic punctuated by ancient mountains, fairy glens and beaches of silver sand, and vast peat bogs formed with abundant rainfall over thousands of years where a resilient and resourceful people have carved a living is about as defining as terroirs come.

What are your inspirations and passions behind distilling?

Both my grandads were Poitín men and that along with Donegal’s distilling heritage was a rich wellspring to begin with. Everywhere you look there is inspiration to be had, either from our Donegal Gaeltacht culture, the megalithic history of the area or the unique flora of the area. During my time at Wm Grants, Zubrowka and SABMiller, Moira and I played with ideas, kind of “what if you did…” questions and have been building ideas and concepts that we love and that a big company probably can’t do

What was your vision for the distillery when you started?

We set out from the start “to reclaim the distilling heritage of Donegal and build a legacy of which everyone can be proud”. We plan to build a business for the very long term and to be a significant employer in the area. It’s early days but we now sell in 13 countries and employ 9 people, hopefully, we will just get bigger and stronger from here.

In your opinion, what makes your spirits so special?

We have set out to make everything premium and polarizing. Our overarching characteristic is softness, all of our drinks have a signature softness and we ally this to designs that are striking and beautiful, much as Donegal is. Our Silkie Irish Whiskey has a stand out rich softness to taste and simplicity and elegance to its design; our Dúlamán Irish Maritime Gin has been described as our love letter to the Donegal coast and we have created a soft savory gin with a kiss of the sea. Ultimately for the whiskey distillery, we will produce rich, dry smokey whiskeys highly differentiated from the mainstream of Irish whiskey.

We have some interesting brands to come, a peated Silkie will be ready shortly; we have a barrel aged Armada (Navy) strength version of our An Dúlamán that tastes incredible; Moira is just finessing the recipe for an infused vodka from the Donegal hills and of course the main Ardara Distillery. We have the launch of Bígí Linn (www.sliabhliagdistillers.com/bigi-linn) our cask membership and reward scheme. A lot to do but it’s exciting and it’s just lovely seeing the Donegal Gaeltacht being celebrated through our brands around the world.

To find out more about Sliabh Liag Distillers, visit their website.