“Cooking is almost a kind of religion for me,” says Kevin Fehling jokingly. But perhaps it’s not as far-fetched as it sounds. He cooks with body and soul and creates works of art on the plate and taste explosions on the palate. He began at La Belle Epoque in Travemünde at the age of 27, and rose quickly to the position of head chef. His career-forming influences were diverse. After a few stopovers across Germany, he spent a year with Wahabi Nouri at restaurant Piment where he learned “the human side of cooking”, and a year later with Harald Wohlfahrt in Schwarzwaldstube, where he learned “perfection in the kitchen”. Fehling got his first Michelin star in 2008, the second in 2011. And the third wasn’t far behind.

With the Fehling brand, you only ever get Fehling himself – if the chef is not in the house, the restaurant will not be open. He puts his all into surprising his guests and telling a story with each course, which, he says, “is worth the effort”. Not least for those guests travelling from Japan, America and all over Europe, and even more since last November, when he was awarded his third Michelin star. “There is nothing worse than when you’ve visited a good Michelin-star restaurant, and after some days you wonder what it actually was that you had as a main course. Then it cannot have been good.”

A visit to La Belle Epoque is certainly unforgettable, because creativity and enthusiasm are what Fehling is all about. Creating and developing dishes is an on-going process for him. “Thank god I’m lucky enough to have a profession in which I can be creative. Yes, it’s hard work, but it’s fun. I create in my head when I wake up in the morning, it continues when I drive to the hotel, and at night as well. It is a continuous process.” He puts his ideas down on paper, these are then handed to the kitchen for his team to try out. The result is analysed and depending on the resulting success, it is either dropped or tweaked further. Over a period of two or three months a new dish is generated. “Sometimes this development phase is super quick and we have a new dish within a week.”

Once, Fehling was inspired by his little daughter to create a new dish: “We have a dessert on the menu called ‘The sun, moon and stars’. I had the idea for it when I was holding my daughter on my arm and she pointed upward. She could not speak, she was about 13 months old at the time. And then I said ‘sun, moon and stars’. And that’s how I got the idea to create a dessert made from a child’s perspective. We have some very playful components on the plate, and while it doesn’t look childish, it is a dessert made from a child’s perspective within ​​a three-star cuisine.”

He has perfected the quality and taste of this dish over a long period of time. Various citrus fruits, such as tangerines and oranges, are combined with almonds and white chocolate. A very thin, inflated sugar ball is filled with yellow mandarin foam, which symbolises the sun in the middle of the plate. A mandarin sorbet represents Saturn, and an orange chip Saturn’s ring. In addition, a template was constructed, which shows the Plough on the plate. And then there is the Streusel-cake ice cream. “There’s nothing better than licking the dough from grandma’s bowl with your finger. These are all associations from childhood, not exactly childhood memories, because that’s old hat, but it’s just the idea of ​​creating a dessert as a child would see it. All these components have taken us an extremely long time to develop, longer than we thought.” The result is further evidence of how unique Fehling’s creations really are.

His team is exceptionally dedicated. “They are young, energetic and creative, and part of a process. They are not just there to look at what is done and cook a little bit. But they are completely with it and see how things are improved and changed. This also strengthens the ambition to stay longer, because they are part of something special.”

The working atmosphere in the kitchen is therefore exceptionally good – a kitchen that gives Fehling’s most unusual ideas space.

Currently Fehling likes to play with the Thermomix, a mixing and cooking tool; the PacoJet, a luxury ice cream machine; and using liquid nitrogen at -196°C. He also has a penchant for crustaceans and shellfish, lobster and prawns, scallops and oysters. “I like them a lot because they have so much potential. They are so much more exciting for me than cod. Although a piece of fish is also nice, I can create beautiful things with crustaceans and shellfish.” Fehling gets his seafood from the Mediterranean or the Atlantic. His goods, however, are not fished with large freighters and trawls, but by hand. He sets high value on the ecosystem. “Fish are caught by people sitting in a boat. The scallops that we have on the menu are collected by divers by hand. The products are captured and processed fairly, which makes things even more expensive because of the manual labour behind it.” In this context, Fehling mentions the current Nordic trend towards absolute regionalisation. “All this hype in Scandinavia of a green kitchen and regionality come hell or high water… they can do there. Here in Germany we can’t, because in my opinion I cannot get the quality of the products that I need. When I look out the window of our restaurant, I look directly at the Baltic Sea. But I can rarely get fish from it, because I do not get it in the reliability and size that I would need for a particular dish. And quite often simply not the quality.” The top products that will get him excited only exist in other waters, and he will obtain them from there if he needs to. “Of course it would be nice to have shorter routes for the delivery of the products, but we are one of the few restaurants in Germany who want to offer their guests something very, very special. And if we want a Wagyu Beef from Australia, we are not afraid to order it. I think the environment can cope with that.” 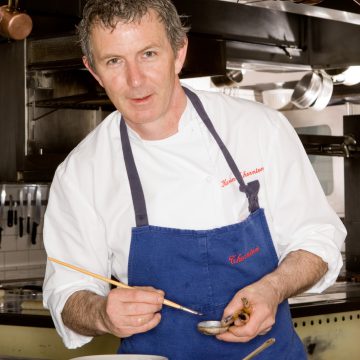 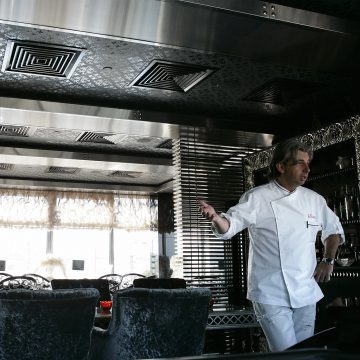