Moreno at Baglioni is the chef’s first restaurant to open in the UK, with Antonio Bufi as head chef, who will work alongside the hotel’s existing team, including executive chef, Andrea Vercelli.

Descending from Le Marche region of Italy, Cedroni plans to bring his signature style of Italian cuisine to London and is currently inviting guests to try a taster in the restaurant ahead of the official launch next Tuesday.

Cedroni was just 20-years-old when he opened his first restaurant, La Madonnina del Pescatore near Ancona, in 1984. In 1995 the restaurant gained its first Michelin star followed by a second in 2006.

Cedroni is known for his contemporary techniques combining traditional and modern Italian food with a strong emphasis on raw fish. 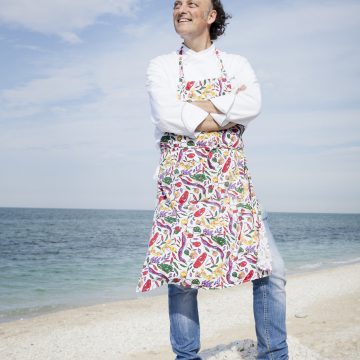 Born in Ancona in 1964, Moreno opened his firstrestaurant,La Madonnina del Pescatore, inSenigallia – a port town which lies on Italy’s breathtaking Adriatic coast -when he was just twenty years old. Since then, Moreno and restaurant LaMadonnina del Pescatore have gone from strength to strength, mentioned by The Wall Street Journalamong the best ten European

Can you guess FOUR’s Chef of the Day from this dish? Need another clue? Read on for more…