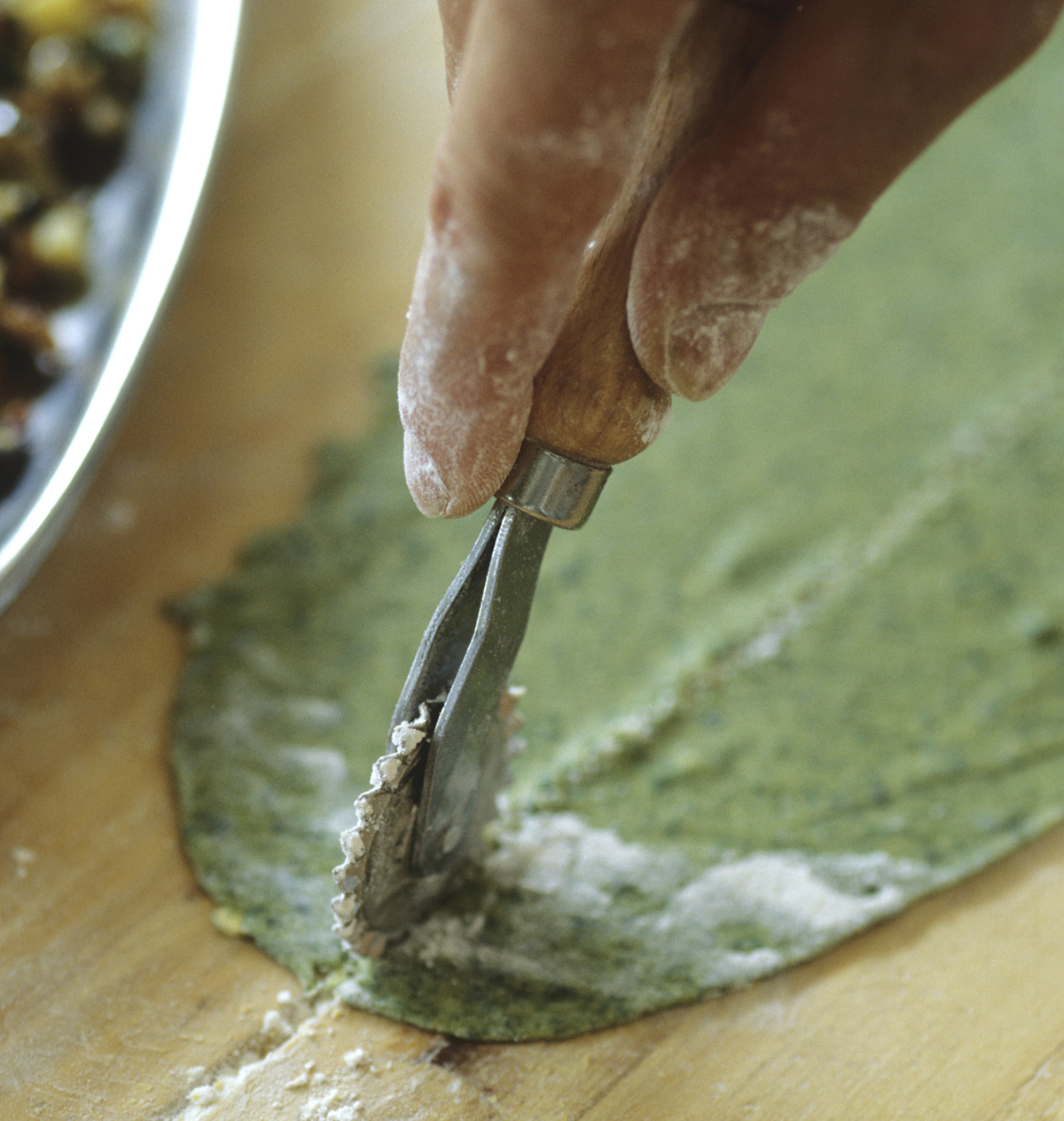 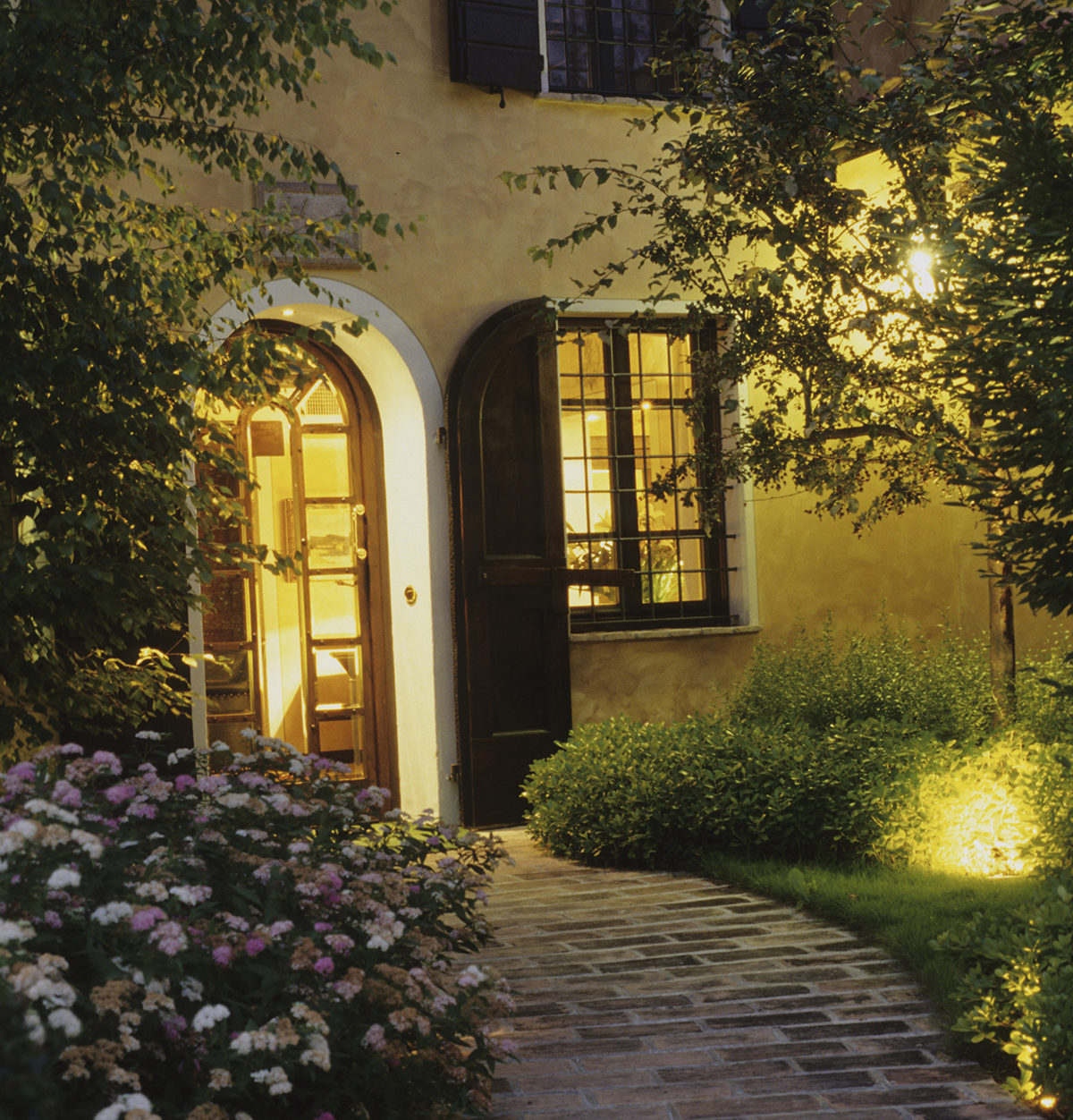 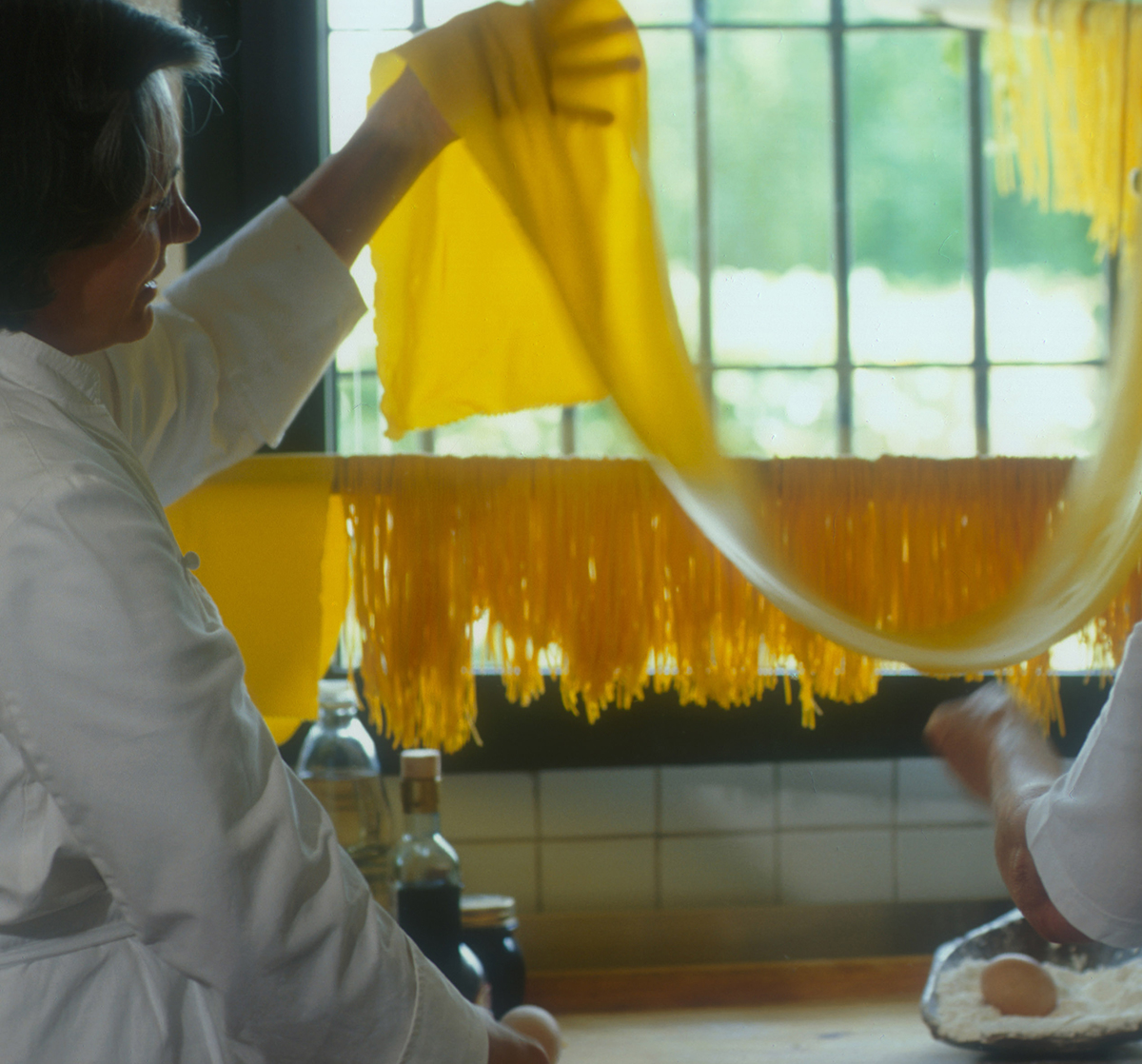 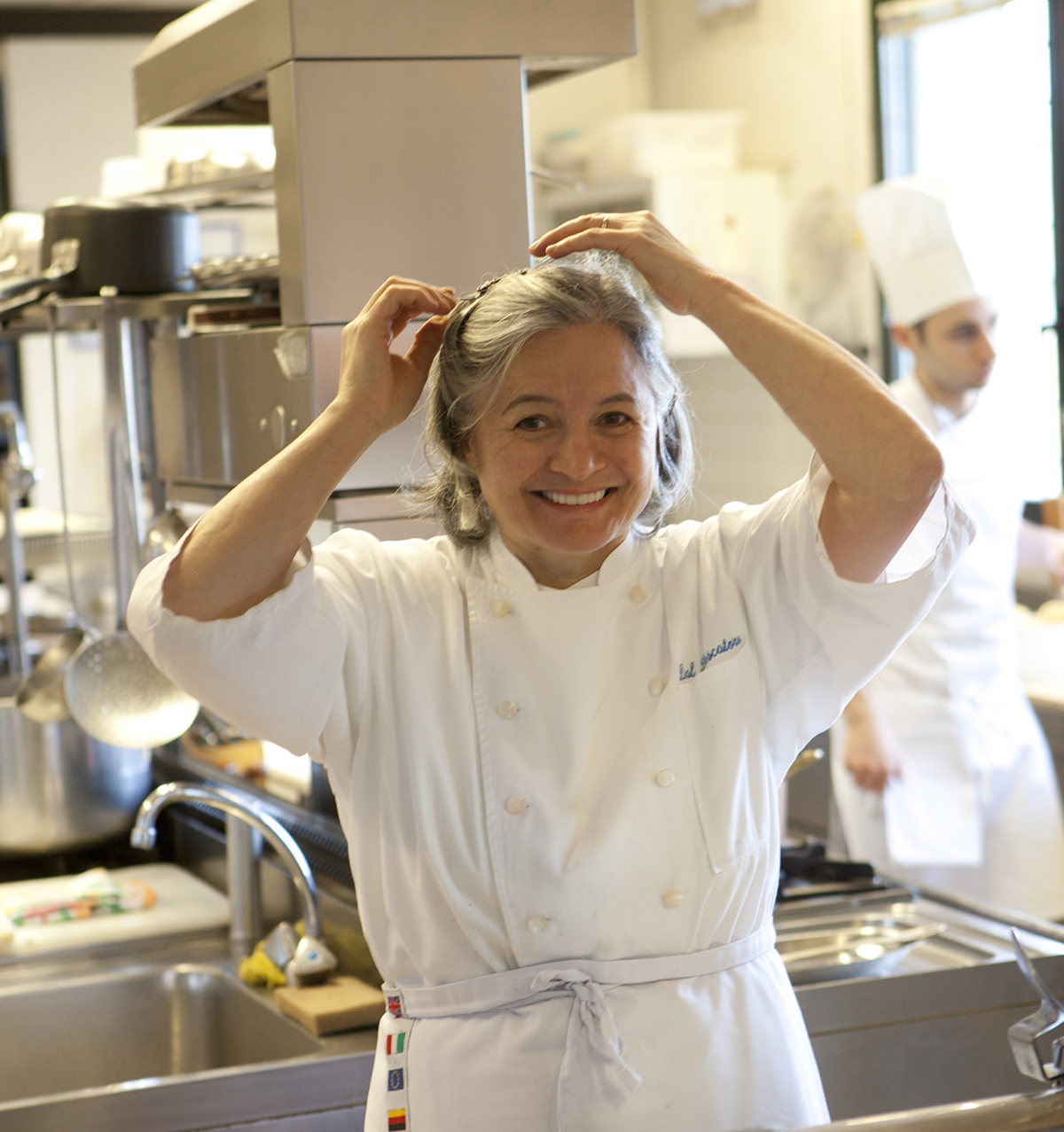 Cooking From The Heart

Sudi Pigott travels to Canneto sull’Oglio, a small town in the Lombardy region of northern Italy, to meet and eat with the Veuve Clicquot World’s Best Female Chef 2013, Nadia Santini, at the family restaurant, dal Pescatore. As seen in FOUR’s International Edition…

Dal Pescatore, a welcoming arcadian family home and restaurant deep in rural market garden Mantovia, is the only kitchen Nadia Santini has ever worked in, which makes her exceptional ascent to the pinnacle of the restaurant business, all the more extraordinary. Not only was Nadia the first woman in Italy to win three Michelin stars—a rating she has held since 1996—this year, Nadia was awarded The Veuve Clicquot Best Female Chef in the World 2013 accolade at The World’s 50 Best Restaurants, the ultimate recognition among her peers, says Angela Harnett approvingly: “Nadia’s style of food very much emanates from home cuisine, raised to its pinnacle and given an extra edge. She has the maturity and confidence to know how to achieve a supreme balance of flavours and to walk away from over-complicating a plate—less is definitely far more at dal Pescatore.”

What’s more, Nadia certainly didn’t set out to become a chef, it was an accident of circumstance and romance with a happy ending. From the Veneto region, Nadia was extremely academic and studied food chemistry (which informs her enduring interest in the psychology of why we eat and how to eat deliciously yet healthily and in balance), plus political science with sociology at Milan University, where she met her future husband Antonio Santini. They married in 1974 and agreed to return to Antonio’s parents’ simple osteria, alongside the river Oglio close to Mantua, Lombardy.

Nadia’s training in traditional Mantuan cuisine was by nonna, namely Antonio’s grandmother Teresa and mother Bruna and has been evolving gradually ever since, she says: “I believe each generation should make a difference. My cooking may have grown lighter, but has not fundamentally changed. It’s important to me to conserve our roots and identity by cooking with familiar ingredients, yet I’m hoping guests will now taste a subtly different flavour and extra nuance in our reinterpretation that only enhances and respects the traditional dish.”

One senses that there is also an unspoken delicate and sometimes precarious dynamic with Bruna still constantly in the kitchen (and name-checked on the menu for her Agnoli in brodo di Gallina made Mantovian style with chicken, beef, sausage and parmesan) that must demand a great deal of diplomacy on Nadia’s behalf. She does reveal that Bruna would prefer eel still to be served in a traditional manner with spinach and tomato, while Nadia has gently moved the dish on to a more delicate and aromatic dish. Nadia explains that her current eel recipe—marinating the eel in water—comes out of her son, Giovanni’s university thesis into preservation methods that date back before Christ. Giovanni has followed his mother’s path, via studying food science and nutrition, into the kitchen and is clearly a great inspiration and ally in evolving dishes with a great deal of thought and finesse. The eel dish now has less vinegar and more wine and aromatics, plus orange and leek. “It’s more refined with a lovely balance of acidity, but my mother-in-law doesn’t like it,” laughs Nadia.

With a mischievous smile that hints at her steely and patient inner strength, Nadia says: “I am not afraid of anything. Many people ask what is the essence of my cuisine? I say I hope to provoke an emotional response to the terroir and the history of this landscape. It is a good way to discover a new world, which is really based on a very old world. I’m happiest if diners can slow down and have an intense emotional connection to the dishes that goes beyond taste and flavour and has a resonance with their history.”

The kitchen itself is fairly modest, though Nadia explains with relish that they are planning to expand and rework the space to mark the Veuve Clicquot recognition. Nadia emphasises repeatedly that she sees it as an accolade for everyone involved in the restaurant, not merely herself. One thing is certain: she won’t be investing in a myriad of high-tech appliances. The one concession is a Pacojet for making ice-cream. “I don’t believe in technology for its own sake, only to make dishes taste better,” explains Nadia firmly. “Everything is done within the service, that’s most important to me. We need to start from fresh every day with a blank canvas. If you cook by hand you’re doing it from the heart and feeling it. That’s so important to me and the philosophy of dal Pescatore.”

I watch Nadia and her small brigade prepare for a midweek lunch service, really working more as if they are in a domestic kitchen. Carmona tomatoes, with a distinctive green tinge, are plunged in boiling water to peel their skins and then passed through a sieve. Meanwhile, almost filigree thin slices of aubergine are fried in grassy, green olive oil to prepare a terrine that serves as amuse bouche topped with basil flowers and surely owes something to Elizabeth David. Nadia says: “This plate is all about olive oil—light and grassy—it totally reflects its terroir.” The Santinis are huge Francophiles and make frequent trips to top French gastronomic tables, citing Paul Bocuse as a particular icon and friend.

Snails served at dal Pescatore are, however, in a style very true to their Mantuan origin, with an aromatic green herb sauce, “aglio dolce” (garlic cloves brought to the boil in cold water with skins left on for two minutes, peeled and then the process repeated twice before blending with a little olive oil, vegetable stock and seasoning) and momentarily sautéed porcini mushrooms.

The making of their signature agrodolce pumpkin tortellini, based on a 16th century recipe, is truly a family affair—and a course ordered by virtually every diner. Antonio, who runs front of house and the wine cellar, joins the kitchen to help prepare the pasta. The pumpkin which grows in the fields surrounding the restaurant is baked very slowly, at low temperature to intensify its flavour, mixed with mostarda, an Italian condiment made with candied fruit and a mustard flavoured syrup, made with Mantovian Campanine apples, parmigiano reggianio and amaretti biscuit crumbs. It is served simply with far less butter or parmigiano reggiano than in former generations, yet is sublime.

The idyllic setting of dal Pescatore in lush gardens has a romantic story, too. In 1925, Antonio’s grandfather acquired a fisherman’s hut built of rushes and a few bricks on the shore of a small lake that lies within the dell’Oglio park. In 1926, he married Teresa. Each morning he would go out to fish and Teresa would cook his catch and other traditional local recipes. Even as a small boy, Antonio’s father helped in his parents’ modest country tavern by selling fish. In 1952 Giovanni married Bruna who took her place beside Teresa in the kitchen and gradually they added white tablecloths and napkins to the simple tables. The original name of the tavern—Vino e Pesce or Wine and Fish—was changed to dal Pescatore in 1960.

Desserts incline to the traditional and are served with exquisite care to detail and presentation: intense, yellow yolked zabaglione in a copper fondue accompanied by meringue exemplifies Nadia’s sensibility: simple, yet phenomenal cooking with soul and heart. True testament to the legacy of Madame Veuve Clicquot nearly 200-years-ago, whose quest for ultimate quality and attributes of creativity and determination, Nadia so elegantly epitomises today. Nadia’s latest book, Nadia et Giovanni Santini dans votre Cuisine, is out now.

Find out more about Nadia and about FOUR’s International Edition .

Champion of promoting all things French in Hong Kong, Chef Benallal of Atelier Vivanda restaurant, spent FOURty seconds with us to tell us what he’s been up to…