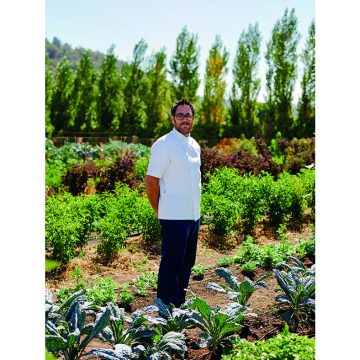 Christopher Kostow is cultivating far more that just carrots in his Napa Valley home. He’s a family man and a chef who is firmly embedded into the community and the roots of Napa’s terrior, writes Kerry Spencer.

“You know, I still think about taking a sabbatical,” says Kostow, as he reflects on his mini-hiatus several years earlier. “I think there’s real value sometimes in just stepping away, but in this particular business, you’ve got to make hay while the sun shines. It can be a young mans business and you’ve got to get somewhere quickly.”

It’s safe to say that Kostow ‘got somewhere quickly’. The philosophy graduate is the chef of The Restaurant at Meadowood in Napa Valley, California, and the third youngest chef— just 35 at the time—to ever receive three Michelin stars, which he has retained for the last six consecutive years.

Kostow’s cooking isn’t just about him. They’re his ideas and flavour combinations that culminate in a superb menu, of course, but his cooking is a narration of St Helena and the wider Napa Valley and Bay Area region. It’s labelled as a New Napa Cuisine, far more hyper-specific than New California Cuisine.

Kostow isn’t a Napa native, though. Originally from the northern suburbs of Chicago, Kostow first worked at Georges on the Cove in San Diego, before taking that all-important sabbatical then spending a spell in France at Le Jardin des Sens in Montpellier, as well as stints in Paris and the Côte d’Azur.

While Kostow indicates he’s keen to take more breaks in the future, for now he’s committed to The Restaurant at Meadowood and his next project, The Charter Oak, in partnership with Nathaniel Dorn, which opens in June.

The Charter Oak, on the site of the former Tra Vigne restaurant on Charter Oak Avenue, St Helena, will be a more casual affair than The Restaurant at Meadowood. Kostow plans to divide his time between the two sites, which are just two miles apart. “I’m here [at Meadowood] five days a week and very present. I don’t want the new place to be about me. I want it to be about the guest and the experience,” he says.

Kostow worked under Daniel Humm at Campton Place in San Francisco in a period before Meadowood and the two chefs have remained good friends, with Humm going on to achieve three stars and global recognition for his restaurant Eleven Madison Park in New York. “Daniel was here just the other week actually. He has been widely successful. He’s proved a really good sounding board for different decisions I’ve made.”

It’s easy to make comparisons between the two chefs—both born in 1976 and both were awarded three Michelin stars at their respective restaurants at a young age—however, Kostow reveals their cooking styles are still very different. “[Daniel’s] style is much more neoclassical, more European, and they’ve certainly gone in the direction of storytelling. We’re a little more elemental and simplistic in our way of cooking.”

What did Kostow learn from the Swiss chef? “…Daniel taught me never to compromise and that if you want to do something, then [you] go do it. I remember a conversation I had with him back at Campton Place, he had referred to something Michel Bras had cooked and my response was, ‘yeah, well that’s [how] Michel Bras does it’, and [Daniel] said ‘why can’t we be Michel Bras?’”

After Campton Place Kostow joined Chez TJ in Mountain View, Palo Alto, as the restaurant’s executive chef. The restaurant gained two Michelin stars during this period, before Kostow moved to The Restaurant at Meadowood, Napa Valley, in 2008.

The San Francisco Bay Area—stretching from the Pacific coast and San Francisco in the west to Napa in the easy—is blessed with some of the world’s most well respected chefs. It’s no coincidence that so many are thriving here. From David Kinch, who earned his third star at Manresa in 2015, to Thomas Keller and The French Laundry, another three-star restaurant just a few miles away from Meadowood, to San Francisco’s Daniel Patterson, Corey Lee, Dominique Crenn and Joshua Skenes.

“I have a real personal relationship with David [Kinch], Daniel Patterson and Corey Lee and I’m a huge advocate of what’s happening in this area right now. There is some great cooking and it all stems from the same DNA: northern Californian cooking,” Kostow says.

What defines northern Californian cooking? Simply put, the very best produce. Kostow explains: “[Using] the best products you can locally and showcasing them as best you can. It really is that simple. California is more about this simple elemental way of cooking that is now spreading more widely.”

This style of elemental cooking is designed around the anatomy of the land, the seasons and presenting the findings on a plate; however, it’s not as straightforward as it sounds. Kostow explains: “We deal with micro seasons. To say that summer is [the season of] tomatoes and fall is squash is kind of an over-simplified view of how agriculture actually works. Really good cherry tomatoes, for example, may only be around for a month; it’s not just about using what’s in season, but about using them when they’re at their absolute best. So if you’re going to be honest to that idea, then you need to be on your toes and really understand what’s happening around you to change things.”

For this part of the culinary world, at least, gone are the days of sourcing what are considered to be luxury ingredients, regardless of their sustainability or place or origin, simply for the sake of extravagance.

“Right now, we have an incredible amount of freedom [in the kitchen], and that is based on this world we have created, from our farm and the infrastructure. There’s the freedom of having all of that at your disposal then there’s the constraint of having to use all of that stuff, but it’s the constraints that drive creativity. Total freedom, meaning you can cook anything, doesn’t lead to great cooking. We’ve created these opportunities and we’ve also created some restrictions and the combination of those things really drives us.”

Kostow continues: “There’s not a lot of concern about what we cook—is this too simple or is that too adventurous—we just do what we do and there’s a ton of freedom in that. There are challenges, too. People [guests] have in their mind what a three-star restaurant is, and we’re probably much more casual, the food is less ‘luxury’—there’s not much lobster poached in butter. It’s a slightly more simple way of cooking so some people may say, ‘well that’s not three star cooking’.”

The restaurant’s menu is “vegetable forward”, while also tapping into the great seafood and shellfish from the Pacific coast. There’s always a red meat dish there, too, and Kostow’s favourite course: cheese. “I love cheese so we’ll always have a cheese course, [followed by] our dessert, which is very small. I really didn’t want to have a big dessert program, for a variety of reasons, a very small sweet thing and that’s really because of my own desire. I just don’t want to finish the meal with three plates of deserts, so that’s more or less the swell of the menu.”

The same diligence is applied to every new dish Kostow and his team developed and add to the menu. “We’re also working on a new way of cooking with Napa Valley style wines… but that’s a while off yet,” he reveals.

Kostow released his first book, A New Napa Cuisine, in October 2014. Kostow’s opening line in the book reads: “The prospect of writing a book terrifies me.” Kostow laughs at the reminder. “I think it was easier to finish [the book] than it was to start it,” he reveals.

He admits to enjoying the process, particularly working with his partners on the book, “I was so proud of the work we had all done together. I was very happy with where we were.”

Kostow reveals that the principles of the book and the philosophy of A New Napa Cuisine stems from the growers. In addition to the growers, the book also features artisans who collaborate with The Restaurant at Meadowood and Materia Prima, such as the grains, the milk, the honeycomb and olive oil, with each section showcasing a series of dishes.

The book has been described as a masterpiece by Margit Mondavi, the Vice President of Cultural Affairs at Robert Mondavi Winery in Napa and his initial feeling of being terrified at the prospect of writing the book seems to stem from Kostow’s idea of how he would be perceived, but he says “in the end you also grow up a little bit and you realise that you really stop caring what people think”.

“The book is not some sort of submission of greatest hits or some kind of ‘we’ve arrived, look at who we are’, it’s more of a moment in time and I thought it was important to layout some of these principles of our thinking.”

A New Napa Cuisine is more than just another recipe book. The recipes inside are articulate and speak volumes, not just about the creative, but also the nurturing process that goes into every dish.

I wonder if Kostow is ‘there’. Has he found his place, not just in the local—and hyper-local in his case—but national and international food landscape? “I think you’re never ‘there’ as a chef, but I’m closer to it now. You just strive to get as close as you can, but the thing is, as you go along you also [find] more distractions. It requires not just the diligence and being mindful, but a great team and for everybody to be rowing in the same direction and I think that’s where we are right now.”

In the eight years he’s been at The Restaurant at Meadowood, Kostow has evolved with the restaurant. He’s experienced a luxury few chefs are permitted—to “grow and change the restaurant as we grow and our goals change, which is really cool”.

Kostow isn’t restricted in his choices and he certainly does things his way—the community way. His intelligence and instincts have proved successful thus far. He admits to not being shocked when the restaurant was awarded its third star in 2011. “I felt we were there. I feel like we’d reached a point where there was clarity in the cooking. I wasn’t shocked, I was incredibly pleased, but I wasn’t shocked,” he says.

Success isn’t measured by an entry in the Michelin Guide, but there’s no denying it can be good for a restaurant’s business. Are the stars important to The Restaurant at Meadowood? “We want to be considered the best because I believe in the work that we’re doing, the people that do the work and the culture that we have, so in that respect, yes, [Michelin stars] are important. Are they important in terms of my own perception of my own self-worth? No, but in terms of how I think this restaurant should be seen internationally, yes, I think it’s important.”

While Kostow experienced accolades in his previous restaurants, too—Chez TJ received its second star within two years of the guide’s launch in the San Francisco Bay area, for example—Kostow really came to life in Napa, bonding with the people, the community and the land. And while Kostow is lucky to have Napa—and everything the terrior has enriched him with—Napa is lucky to have Kostow, too. The valley is etched so deeply into his work, his cuisine is Napa and Napa is his cuisine. “I’m not always perfect, but I think as a whole we’ve provided a place for people to succeed and I’m proud of that,” he ends.