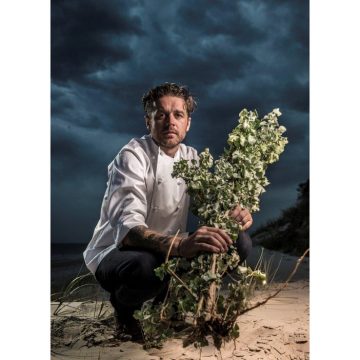 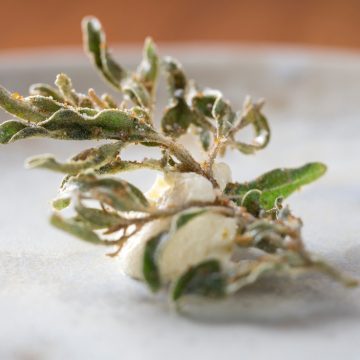 “I have a deep love for HP sauce”

Dorrigo pepper (Tasmannia stipitata)is an amazing Australian native rainforest shrub. It’s got a huge pepper flavour but, really interestingly, it is not immediate and takes 49 seconds to come to life on the palate. When it does, it’s powerful, delicious and absolutely stunning. We wild harvest it in the rainforests around northern NSW. As well as one of our chefs foraging full time for durations of one month each on a rotation here in Adelaide, I also have a full time forager up in Northern NSW who forages Dorrigo Pepper and other amazing ingredients throughout the tropics of that region. Right now it is featured with pearl meat as one of the snacks that start the meal at Orana. It’s a very unique numbing sensation, which is delayed in reaching the senses by about 30-40 seconds, so must be used with respect. Snacks work well as they are just small bursts to the palette.

Gubinge (Terminalia ferdinandiana)is actually the Nyul Nyul people’s name for a wild plum also known as Billy Goat or Kakadu plum. As we source them from Nyul Nyul country in the Kimberley, Australia, we use their name for the product out of respect. The wild harvest of this amazing super food is spearheaded by Bruno Dann (Winnawal), who has returned to his land to look after his ancestral country. Bruno is an amazing man. His official titles areTraditional Owner, Indigenous Artist, Indigenous Landcare and Culture Specialist and Chairperson of Manowan Aboriginal Corporation. He has dedicated his life to restoring his culture and its land, so calling him a producer doesn’t do him justice and isn’t exactly accurate. The Gubinge tree is native to the Dampier Peninsular and is a traditional source of food and medicine for the Nyul Nyul people. It is only wild harvested, so as the land recovers, the harvest improves. More importantly, by supporting this product we are helping the people of that area stay connected with their land. We use it for many things. Due to the crazy high levels of vitamin C, it can break down the muscle structure of meat in just one week. The added bonus is it’s delicious!

Oecophylla smaragdina, or green ants,found in the tropical and coastal areas in Australia are often referred to as weaver ants because of their ability to weave leaves together to form nests bound with silk produced by their larvae. One nest contains thousands of ants and we use them for a variety of things including seasonings and sorbets. They have the most amazing lime zing that wakes your mouth up in an instant. Traditionally used as a medicine for throat issues, we source the ants from communities throughout the Northern Territory and Arnhem Land.

I source my dry-aged beef from Richard Gunner. We have a very special partnership, which has seen us grow the overall quality of beef sold into restaurants inSouth Australia and includes the reintroduction of purebred English Longhorn cattle, which had since become extinct here in Australia. As I select only traditional old-fashioned breeds of beef, they take a minimum of two and a half years to mature. This, of course, gives the meat not only a phenomenal flavour profile,but also an amazing texture. Add our dry ageing process to that and you have a piece of beef that matches the memories I have of amazing beef and, for our customers, a taste of something they won’t quickly forget. We use it downstairs in Street-ADL for steaks (Flat Iron) and also burgers (rump), which are served medium rare.

The original recipe for HP Sauce was invented and developed by Frederick Gibson Garton, a grocer from Nottingham in the UK.He registered the name HP Sauce in 1895. Garton called the sauce HP because he had heard that a restaurant in the Houses of Parliamenthad begun serving it. HP sauce is a delicious fruity slightly spicy brown sauce that has been on my dinner table since I can remember and always will be. Ingredients include maltvinegar, dates, black strap molasses, tomato, orange juice concentrate, tamarind extract, garlic, chilli peppers and mustard flour. I have a deep love for HP Sauce!